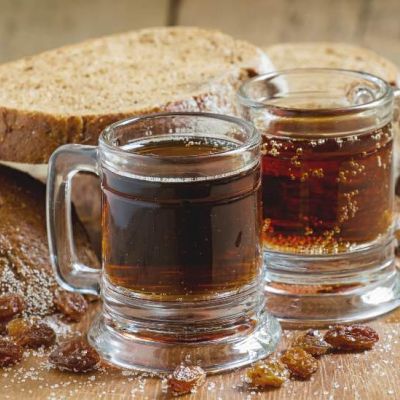 Why is there alcohol in sourdough bread?

Most of the ethanol alcohol produced evaporates during baking, leaving a semi-burnt alcoholic aroma integral to the smell of bread. In small quantities, this aroma perfumes the bread beautifully, but when excessive amounts of alcohol are created, the smell lingers, making it overpowering.

Why does my homemade sourdough bread smell like alcohol?

There will always be some alcohol produced in bread dough as it’s released when it rises. Its production begins with carbohydrates in the flour being broken down into simple sugars by enzymes introduced by the starter or the flour. The sugars are processed by yeast and lactic acid bacteria which were cultivated in the sourdough starter. Multiple pathways follow, which release carbon dioxide (gas) and other compounds, including ethanol (alcohol).

There are two routes a sourdough starter can process sugars to produce alcohol. The primary way is for yeast to undergo fermentation, where sugars come in contact with the yeast without the presence of oxygen (anaerobic). The sugar is processed by the yeast, producing carbon dioxide and ethanol. The carbon dioxide is captured by gluten strands in the dough, making it rise. Yeast fermentation occurs in yeast or sourdough-leavened bread.

The secondary route for creating alcohol is where strains of heterofermentative lactic acid bacteria ferment sugar, producing acetyl, carbon dioxide and lactic acid. When acetyl is combined with a co-substrate, it is co-metabolised into acetic acid. If not, the acetyl will become ethanol.

How to fix sourdough bread that smells strongly of alcohol

Sourdough bread can smell like alcohol because of increased rates of anaerobic respiration (leading to yeast fermentation) or heterofermentative activity (producing ethanol through the oxidation of acetyl). Whilst we can’t remove these activities entirely, we can take steps to minimise them. Here are the common issues that make sourdough bread smell like alcohol after baking:

The dough was over-proofed

Yeast in the sourdough starter will utilise oxygen in the dough during the early stages of rising. Once the oxygen is used up, the yeast will respire anaerobically, where it ferments to produce carbon dioxide and ethanol. Proofing dough for longer leads to more ethanol produced, and the aroma remains after it is baked.

Dough was over fermented

Similar to the previous point, if too much gas is created during the first rise (usually because it was left too long), much of the oxygen in the dough will be used up, and the yeast will be fermenting. By the time the dough is fully risen (at the end of the second rise) it can be high in alcohol.

The dough was not kneaded enough

Ok, you might be primarily using stretch and folds instead of solely kneading your sourdough, but the same issues from underdeveloped gluten can arise. If the gluten is underdeveloped by the time you shape your dough, it’ll need longer to rise. The reason for this is the gluten won’t be able to stretch as effectively, meaning a higher proportion of the gas created will escape. The dough will then need longer to rise and create more alcohol.

The dough was too warm

If your dough is too warm, yeast will burn through sugars during the first rise. Whilst this might sound exciting, fewer sugars will remain for the second rise, and the gluten structure will probably be immature and less able to capture the gas. The result is: You’ll have to rise your dough for longer and more alcohol is created.

The starter was overripe

A sourdough starter ferments the same as a loaf of sourdough bread, so also produces alcohol. Like an over-proofed dough, if the starter runs out of nutrients from fresh flour, alcohol levels increase. In extreme cases, the alcohol rises to the top of the starter, called hooch. The hooch on the surface of the starter appears to protect the contents below from infection (it can reach upwards of 15%-18% alcohol by volume). To fix an overripe starter, all you need to do is feed your starter a few times before use.

If the starter is weak, it won’t have enough of the good bacteria and too much of the wrong ones. Using a weak starter to make your sourdough bread will lead to a longer fermentation time, producing extra ethanol. To make your starter more mature, keep refreshing it for a few more days so that the correct enzymes can populate and support yeast and lactobacilli.

We’ve covered the science behind bread dough smelling of alcohol and how to prevent it from occurring -or at least reduce it. If you wish to learn more about the science behind sourdough, click the link. But in the case of sourdough bread smelling of alcohol, generally, the longer fermentation lasts, the more likely the smell will remain in the bread. So, what will you change when you make bread now? Let me know in the comments below.

How can I prevent my sourdough starter from smelling like alcohol?
To prevent your sourdough starter from smelling like alcohol, you want to make sure that you feed it enough flour and water to have what it needs to support the growth of both yeasts and lactobacilli together so they ferment properly.
What causes sourdough to smell like alcohol?
In summary, sourdough bread smells like alcohol because it contains ethyl alcohol made from fermenting sugars in flour from wheat or other grains. This alcohol largely evaporates during baking, leaving behind the classic sourdough flavour. When there is too much alcohol produced during fermentation, the alcoholic aroma becomes too strong.
Does sourdough bread contain alcohol?
Ethanol alcohol is a product of the fermentation process when it metabolises sugar. Much of the alcohol is burned off and evaporated in the oven. However, some will remain. Where excessive alcohol production occurs, more alcohol will be left in the sourdough after it’s baked.
Why does my bread taste like wine?
Yeast produces alcohol as well as carbon dioxide and other compounds. Especially when wholegrain flours are used, fruity, wine-like flavours can be produced. If you don’t like the taste, try fermenting your dough a little less.
Can you get drunk from sourdough starter?
A raw sourdough starter will contain alcohol but at a maximum percentage of 1.9%. You would need to eat a lot of starter to get drunk, so much so you’re more likely to get an upset stomach due to eating such cast amounts of live bacteria and fungi.