Help! My Sourdough Starter Has Liquid On Top!! 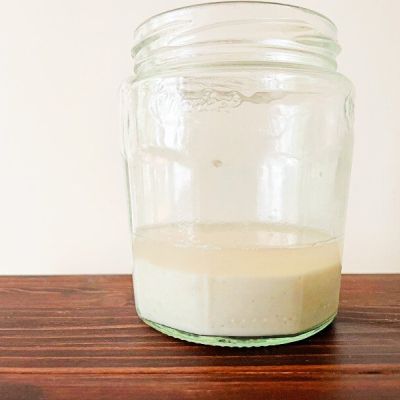 If you find a layer of liquid on top of your sourdough starter, don’t panic! You’re not alone. It’s actually quite common. In this guide, you’ll find out what the liquid is called and whether it’s a big problem when making sourdough bread.

Liquid on top of sourdough starter?

Enzymes and water in a sourdough starter break down starches found in the flour to become smaller sugars. The starter consumes these sugars and in doing so, it produces CO2, water and ethanol (alcohol) as well as other products. Like in bread, the CO2 gas gets trapped in the gluten structure and the starter rises. Eventually, the gluten in the starter weakens and the starter collapses on its own weight.

When the starter is left for a long time without fresh food (the flour), it starts to produce a liquid on top. This liquid is called “hooch”. Hooch comprises of excess water and alcohol which have separated from the remaining ingredients. Because moistened flour is heavier it remains at the bottom and the alcoholic water rises to the top.

It is also thought that dead yeast cells and other waste products dissolve into the hooch and these combine to protect the starving starter from the elements by forming an uninviting barrier. But I have found no scientific evidence to prove or disprove this thesis.

Hooch can range in colour. It will be a clear liquid once first developed that turns brown, brown, grey and black as it ages. The longer the starter has been left unfed, the darker the liquid. I also noticed in my experiment that when the lid of my jar was tightly sealed little change in colour was noted. And as soon as I let a bit of fresh air in, the starter took a sharp change in colour!

Clear hooch isn’t harmful or toxic, so there’s no need for concern about consuming it. In researching this article I noted that some brewers were incorporating it in their homemade beer and wine!

Should I poor hooch away or stir it into my starter?

There have been many minor debates on whether hooch should be poured away or stirred back in, the general answer is that it doesn’t really matter. There is nothing in hooch that isn’t in a healthy starter. If hooch has developed it is because the starter was starved, so for maximum leavening power, it is best to make a handful of refreshments before using it for bread, anyway. If there is too much alcohol or unwanted products, the starter’s natural ecosystem will restore it to full health.

What should I do if there is hooch on top of my starter?

A sourdough starter has liquid on top means the starter just needs more flour to feed it. The hooch is harmless. Simply stir it back into the starter and feed it with fresh flour and water.

How to prevent hooch in a sourdough starter

Hooch is common when a starter has been left longer than usual between feeds. If you see hooch between every feed, you should rethink your starter recipe and feeding routine. Your starter needs more micro bacteria to feed on between refreshments and is running out of food!

To remedy hooch from appearing: When refreshing, increase the amount of flour and water while decreasing the starter ratio. If you currently feed with a 1:1:1 ratio of starter, flour and water, say, 100 grams of each. Switch to a 1:2:2 ratio of 75 grams starter and 150 grams of flour and water. This will remove the problem of recurring hooch found on your sourdough.

What if this doesn’t fix the problem?

If you increase the amount of fresh flour in your feeds and still discover hooch liquid, you have four choices:

Let’s look at them in more detail:

If your starter is still too active, you could increase the feeds further to a 1:3:3 ratio. I prefer a 1:4:5 ratio of old starter, water and flour, as I like my starter to be thick when I’m ready to bake.

You should look to feed your starter once it is at its peak. Some starters are fed daily, but many bakers feed theirs twice a day. If you’re running into hooch problems, feeding it twice or even three times a day should resolve it.

What if I am not in all the time to feed my starter?

We can’t all work from home and watch our precious sourdough fermenting on the windowsill! In my sourdough starter recipe, you’ll see a range of feeding routines that you can adapt to your needs.

The perfect type of flour for a sourdough starter can take a little trial and error. Switching for a better brand can sometimes fix your hooch issue. If you use all-purpose flour, try trading it for a high gluten bread flour. This will provide more food for the starters bacteria, wild yeasts and enzymes.

Switching a portion of white wheat flour for rye flour or another high in bran flour will add more minerals to be devoured. Organic and stoneground flour have similar benefits too!

Cooling down the starter

If you are in an especially warm climate, the room temperature can be too hot. This speeds up the rate of fermentation in the starter and will cause it to peak quickly. If this is the case, over-fermenting the starter to develop hooch is likely.

To reduce the number of feeds required each day, you can opt to cool the starter to somewhere between 25–32C (77-90F) by finding a cooler place in your home.

What if the hooch turns red?

If the hooch turns red or any other colour representing mould, you shouldn’t use the starter right now, but, it can be fixed! You can follow the steps in my how to fix a mouldy starter guide (just remember to wash your hands). This method can take longer to recover than starting a new one would, so it’s up to you if you want to save your starter or begin from new.

What if I have hooch right after feeding my starter?

This is most likely not hooch that you are seeing on your starter. It is because the flour and existing starter have not emulsified into the water properly and formed separate layers To remedy, stir the starter a little more when feeding, or give it an extra stir 30 minutes afterwards.

What do I do once my starter has recovered?

Once you’ve had a few days of feeding your starter without seeing any hooch you can use it to make bread safely. If you find you are discarding a lot of flour, then you can store it in the fridge until the day before you need it. 12 hours before, take it out, feed it and it’ll be ready to use later on.

Ending thoughts about sourdough starter with liquid on the top

In this article, we’ve covered everything I can think of about hooch on top of sourdough starter! If you have any other questions, comments or are struggling to troubleshoot your starter or sourdough bread, drop a note in the comments below.