How To Revive A Mouldy Sourdough Starter 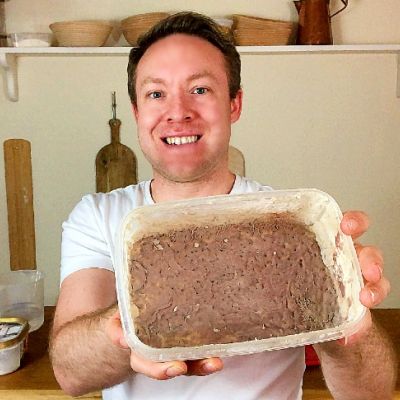 It’s possibly a vanity project but I refuse to let my sourdough starter die. I’ve had it since 2016 -through thick and thin! Although I’ve neglected it a few times, I’ve always managed to revive it with success, be it left in hte fridge for months, or when it’s layered in mould! I used to believe that a stronger, more resilient sourdough will be created from a reviving and old, instead of starting a fresh one. But it’s not true. It’s great for nostalga to be able to say that it’s several years old but in my experience it takes longer to remove the unwanted mould and bacteria from a rancid starter than it is to start a new one.

If your starter isn’t mouldy, but in need of a boost, this sourdough starter troubleshooting article will fix your issue, but if you are looking to save a mouldy sourdough starter, read on!

Why does mould occur on sourdough

Mould spores of fungus exist everywhere in the environment. A sourdough culture is normally a strong and resistant environment that uses enzymes to break down any foreign depostits. But, when a starter has been negleted for a while it becomes less acidic and alcoholic. Mould spores can then enter and thrive, ruining your starter.

How to prevent mould occurring in a starter

The best solution is to have a clean bowl, clean hands and clean equipment when making your sourdough. Try moving it where foreign objects can’t enter or using a tighter lid to cover it. If an issue persists, try bottled water and/or consider changing your flour.

How to fix a mouldy starter

Depending on the level of mould on the starter, it might just be a thick crust of mould that you can peel off and rescue the good stuff underneath. If it is more deep-rooted, dig to the bottom of your sourdough container and find a patch that isn’t mouldy. You only need a teaspoon’s worth.

Take a small pot and mix a teaspoon of sourdough with roughly 30 grams of water and 30 grams of flour and cover. The following day, discard some of the starter, leaving just a teaspoon’s worth in the pot and repeat the feedings.

Repeat this for two or three days, moving to a bigger pot and refreshing as normal. After a week or two, the sourdough will be fully revived!

Here’s a video to explain the process in detail:

After you’ve recovered a mouldy sourdough, give it a week or so of regular feedings to allow the starter to become balanced again. You’ll be able to tell that it’s ready by the smell. A healthy starter should smell nice and aromatic.

Can I get sick from mouldy sourdough?

If you eat mouldy sourdough raw then you can get quite sick. Be careful to wash and sanitise your hands and the surfaces afterwards to prevent any bacteria spreading. Once bacteria passes 60C (140F) it becomes inactive and won’t cause you harm.

A ripe sourdough develops an environment that is consistently healthy. It becomes strong enough to repel bad bacteria in small quantities.

Can a sourdough be too mouldy to fix?

Even if it looks like it on the surface, peel back the skin that’s formed and see if you can find an area that isn’t mouldy. If the mould is everywhere you will have to throw it away and start a new one.

View the sourdough bread recipe for beginners to see my full guide on making sourdough.

The results show just how much bacteria is on our hands and many of the tested objects. The learning is to make sure that we wash our hands regularly.