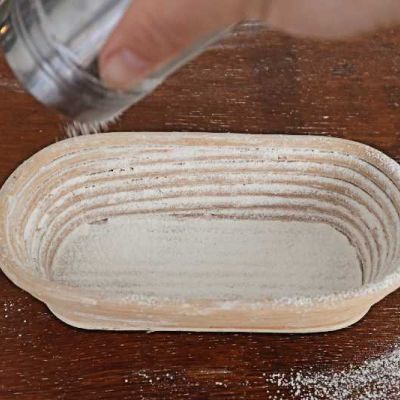 If you make sourdough bread or any yeasted bread, you’ll likely have encountered dough sticking to the banneton! A small patch of stickiness won’t cause a problem, but when the dough really sticks, it can completely ruin your day! I’ve experienced this many times and know how disappointing it is, so I’ve produced this guide on how to keep dough from sticking to a banneton so you don’t run into this problem.

Why does dough stick to the banneton?

Dough sticks to a banneton because the dough is moist and attaches to the banneton. To prevent dough from sticking, the banneton is lined with a barrier of flour (or a similar grain) before the dough is placed inside. Even after dusting the banneton, a wet dough can still stick. Causes for this are a weak gluten structure, an overly wet dough, or the dusting was not enough to provide a suitable barrier between the banneton and the dough.

How to keep dough from sticking to a banneton

Aside from avoiding sticky dough (which we’ll discuss in a moment), the most important factor is lining the banneton effectively. Here are three ways to do it:

1) Line the banneton with flour

Take your banneton and dust flour around the edges (a flour shaker is handy). Tilt the banneton 45 degrees, and rotate it, tapping gently, so the flour is evenly distributed throughout. Sprinkle flour in any areas that need a top-up.

2) Line the banneton with a larger grain

Larger grains such as coarse semolina, rice flour and cornmeal provide a thicker barrier between the basket and the dough. Dust lightly with flour like before, then repeat with the larger grain. The double layer provides optimum protection from dough sticking.

3) Dust the dough, not the banneton!

Instead of dusting the banneton, many bakers find it easier to dust flour on the dough after it’s shaped. I’ve found it’s harder to get enough flour to cover it when using high-hydration doughs, but it’s never let me down when the dough is a medium-to-dry consistency.

How much flour to add when dusting the banneton?

A balance between adding too much flour and not enough requires a bit of experience. If too much flour remains on the bread in the oven, it can burn or leave a bitter taste. If there’s too little, your dough can get stuck, which is even worse!

You can remove excess flour with a pastry brush after successfully removing the dough from the banneton:

But brushing the excess flour away is time-consuming, messy, and still wastes flour. Having said that, it’s still better to add too much flour (or other grain) than not enough. Not enough of a covering will likely end in the dough getting stuck in the banneton when it’s time to bake.

If the dough is high-hydration, you will need more flour in your basket. A low-hydration (firmer) dough will only need a little bit.

The amount of flour required also depends on how often you use your banneton. If you use it several times a week, the remnants of flour from previous dustings will stay loose and support the fresh dusting.

If it’s been a while since it was last used, any old flour will have dried and clumped together, so it won’t offer much support in forming a barrier (meaning you’ll need to dust more).

How to care for a new banneton

When you get hold of a new bread banneton, before using it, you should take a few steps to start building up a non-stick layer. Not doing so usually means that your first handfuls of dough will stick, so it’s worth doing!

How to avoid a sticky dough

There are a few steps you can take to avoid a wet dough to lower the likelihood of it sticking and so you won’t need to dust the banneton with as much flour. Here are a few things to review:

Use the right flour

It’s best to use high-protein bread flour to make most types of bread. It’s possible to use all-purpose flour for some longer-fermented recipes. However, if the dough is weak and sticky, it could be because there isn’t enough gluten to build a strong structure. The dough will stick to the banneton or collapse when tipped out.

Don’t add too much water to your dough

Even with the right flour, you can still have a sticky dough if you use too much water in your recipe. Be sure to weigh the water with scales, so you have accurate measurements, and if making a recipe for the first time (or using a new flour), hold back 5% of the water when kneading and only include it if the dough has a dry consistency.

Like a wet dough can get stuck in the banneton, one that’s been left to rise for too long can also cling to the sides when it’s ready to bake. To prevent over-proofing, keep checking up on the dough when it’s rising for it to double in size. If it’s ready before your oven is preheated, pop it in the fridge to slow down the activity of the yeast.

Don’t knead your dough too much

If you knead the dough for a long time and then follow with a long first or second rise, the gluten will pass its optimum baking window and begin to collapse. When trying to remove it from the banneton, there’s a good chance that the dough will collapse and stick to the sides. Take a look at my how long to knead dough article to learn more.

What happens if my dough gets stuck in the banneton?

If you tip your banneton over and it doesn’t come out right away, don’t panic just yet! Follow these steps for the best chance of getting the dough out in one piece.

1) Give the basket a tap

Invert the banneton at pace, letting it collide with the peel or board to make a thud.

2) Leave the basket upside down

Next, leave the inverted basket for 10 minutes. Sometimes, the dough will drop out.

After 10 minutes, tap the basket on the tray or workbench.

4) Dislodge the dough from the banneton

If this does not work, place the banneton in the freezer for 30-60 minutes before ready to tip. The dough will harden and come out of the banneton easier. Use a dough scraper or palette knife to pull the dough away from the edges.

What if the dough won’t come out?

If the dough still won’t come out, pull it out with your hands, drizzle it with oil and bake on a baking sheet. Impromptu focaccia is better than no bread!

Should I use a banneton liner?

Banneton liners are cloth liners that act as a barrier between the proofing dough and the basket. They absorb some flour when used so that an old liner will require less flour dusting. The liner will also cushion the dough so that the spiral grooves of the banneton don’t get imprinted on the surface of the dough.