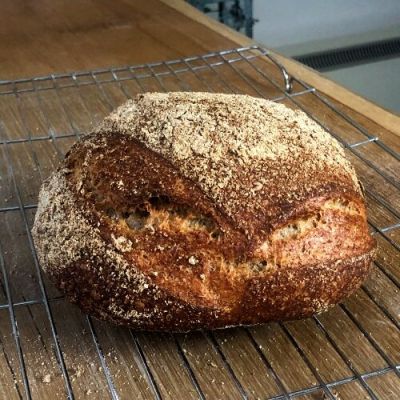 Oxidation and over-oxidation in bread dough are topics that bakers don’t mention enough. To understand its importance here’s an experience I had when I thought I was cleverer than I am:

I had tried to make a spectacular “super bread”. I’d mixed it “hard”, bulk fermented it “long”, and gave it a nice, extended rise. I thought it would be a showstopping loaf. But in reality, the bread was a disaster.

The dough came out of the banneton and collapsed.

Sometimes this can be fixed during the oven spring, but no.

Flat as a pancake, and the luminous white crumb didn’t taste of anything.

I still remember my bitter disappointment.

I know now the problem was over-oxidation. So it led me to find out the truth about oxygen in bread, is oxygen required and how can you prevent over-oxidation?

What is oxidation in bread dough?

When flour is in contact with air, it absorbs oxygen. The amount of oxygen absorbed increases when the dough is kneaded. The dough uses the oxygen in the dough to strengthen the dough structure and supply the yeast. It can also have a detrimental effect on the dough.

As gluten molecules are oxidated, sulfhydryl groups in some amino acids are oxidized to produce disulfide bonds. These contribute to the crosslinking of the gluten, which produces an enhanced gluten structure. It makes the dough easier to shape and rise uniformly.

How oxygen benefits the yeast

Yeast has two ways it can produce carbon dioxide gas in bread making comprising of aerobic or anaerobic respiration.

When yeast has oxygen available it respires, following the citric acid cycle. Without oxygen, simple sugars take an anaerobic pathway which leads to fermentation.

The yeast fermentation process is much talked about as it produces carbon dioxide and ethanol, which supplements the growth and fermentation of organic acids. While fermentation sounds more exciting and provides flavour and bread-like features, respiration is just as important.

Aerobic respiration is best for light-tasting bread made with a short rise. It releases more ATP molecules which provide energy that makes the dough rise quicker. Because bread made this way undergoes little fermentation, its flavour is light.

The benefits of organic acids and ethanol provided by anaerobic respiration are favoured in artisan bread. These extra components act as natural dough conditioners and flavour enhancers to make a more exciting loaf that keeps fresh for longer.

The tricky task for home bakers is to not sit on the fence!

You either want to incorporate a lot of oxygen and rise the bread quickly or a longer rise for a more fermented flavour.

There are deviations, for example, you can pre-ferment a portion of the flour with yeast before adding it to the remaining ingredients to get the best of both worlds! The pre-fermented flour adds fermented goodness, leading to a quickly-risen, intensely-kneaded loaf with better flavour and texture.

What is the issue with over-oxidation in bread dough?

When too much oxygen is incorporated into the flour, it destroys the flavour and appearance of the bread. The yellow/creamy lipids in the flour are the carotene pigments called carotenoids.

As oxygen is absorbed, the carotenoids become over-oxidated and turn pure white. If this happens, it shows that the carotenoids are damaged, and their minerals have been washed away. For this reason, over-oxidation is also known as flour “bleaching” by bread bakers.

Not only does over-oxidation wash away colour and minerals. It also removes bread-like flavours, leaving a bitter taste after baking.

How to tell if dough is over-oxidated

The best way to see if there is too much oxygen is by looking at the colour of the crumb. If it is dull and white, there was too much exposure. Another thing to observe is the crumb structure. Too much oxygen produces irregular holes in a close-knit crumb. The aroma will also be bland.

The causes of over-oxidation in bread dough

Dough absorbs a considerable amount of oxygen as it is kneaded. Oxygen continues to be absorbed as the dough sits during the first and second rises.

A long fermentation period after intensive mixing is the leading cause of over-oxidation, yet there are others, including:

How to prevent over-oxidation in bread

If a long mixing time is used, bulk fermentation duration must be reduced to prevent over-oxidation. Even if mixing is light, some flours can’t withstand long periods of oxygen exposure and collapse.

It’s also a good idea to reduce the amount of oxygen that can come into contact with the dough. Little things such as using small containers for bulk fermentation and a lid to cover dough-resting containers make a big difference.

How to prevent over-oxidation when mixing

Incorporating too much oxygen is common where intense mixing is used. Oxidation is reduced in some bakeries by using specialist vacuum mixers that prevent oxygen from entering the dough. They use these mixers alongside adding an anti-oxidant such as ascorbic acid.

Ascorbic acid is often used to increase the amount of oxygen in the dough for home baking and many small industrial bakeries.

Some industrial mixers can use ascorbic acid as an anti-oxidant, allowing longer fermentation or kneading times to be achieved without spoilage.

A dough relaxer such as inactive yeast will reverse the effects of oxidizers, this is a topic in itself, see the dough conditioners page to learn more.

Over-oxidation can also occur when stand mixers are used. Some mixers won’t develop the gluten effectively, so many home bakers increase the kneading time above 15 minutes. A lot of oxygen will be incorporated in this long mixing time, so you may find better results by increasing bulk fermentation time, adding a dough improver or kneading by hand.

How to make a quick-bread

Mixing times will be 2-3 minutes at slow speed and 5-7 minutes at fast speed. Ascorbic acid can be added to enhance oxygen intake.

The method pumps oxygen into the dough, which provides:

Flour oxidation works similarly to dough oxidation but at a different stage.

Typically flour is stored for 3-4 weeks before use. This ageing process lets the flour absorb oxygen which matures the protein and makes it suitable to make bread.

Nowadays, it is common for flour mills to add an oxidizing agent such as ascorbic acid to fresh flour during milling.

Oxidizing agents speed up flour maturation so it can be packed and sold straight away. The process removes storage and infrastructure costs without affecting the quality of the dough.

Whole wheat flour contains yellowy-brown particles called bran, which is the outer casing of the wheat.

When over-exposed to oxygen, bran takes on a darker colour. These are the black specks that are often seen on dough that have been chilled for several days.

Does dough need oxygen to rise?

Oxygen is not essential for the yeast to produce gas and rise, though it is beneficial for quickly risen bread. The kneading duration is best kept short for a longer fermented dough to reduce oxygen intake.

Does sourdough starter need oxygen?
A new sourdough starter should be loosely covered but not because it needs oxygen. The lid is loosened so fresh bacteria can enter and carbon dioxide can escape. If securely fastened, it can create a vacuum that slows down growth or even makes the jar explode!
Why does flour contain ascorbic acid?
Ascorbic acid is a common ingredient listed on flour bag labels. It acts as an oxidizing agent to mature the flour quickly. Ascorbic acid reduces the cost of storing flour without altering its quality. Potasium bromate is an alternative agent.
Is bread making anaerobic?
Both types of respiration are used during the bread-making process. Aerobic respiration occurs at the early stages of gas production and is desired in quick-bread. Anaerobic respiration leads to fermentation and is the prevailing function of the yeast in longer proofed bread.