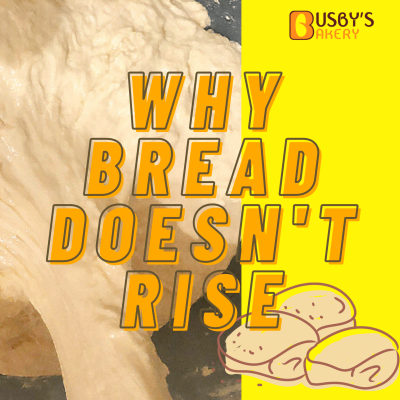 In this article, we are going to cover the 13 reasons why bread doesn’t rise so you can make fantastic bread at home every time. I’ve been there…You put all your passion and time into making (what you think is) the perfect loaf to discover it doesn’t rise. Disaster!

Sometimes you can proof dough for what seems like forever, but it simply will not rise or not rise much. Well, have no fear. We’ve all had a few stinkers!

After reading this article, you will know the most common reasons why bread doesn’t rise and discover ways to improve your rise.

It doesn’t matter about cheese stuffings, einkorn flour or stretch and folds. If the bread simply won’t rise, there’s nothing to celebrate! So let’s go through the most common reasons why your bread is not rising to the top of the tin.

The reason bread might not rise can be down to many things and often a combination of the errors shown below. The way I eradicate issues in my bread is by starting with the dough. So let’s discuss what to look for so that your bread rises in future.

Let’s start with the basics. Back as a bakery manager, I had many bakers insist that they had put the yeast in the mixing bowl to find it next to the scales on the table behind. It’s a silly mistake, but it happens more than you might think.

How do you tell?

If the yeast is in the dough, you should feel some gassiness. If not, give it a smell. The aroma of the yeast will be noticeable.

If you are still not sure, tear a piece of dough and put it in a jug of water and place it in the microwave. As it warms, the dough should rise to the surface. If it doesn’t rise, the yeast has been forgotten or is out of date.

You will need to restart the recipe, but you can reuse a portion of the dough in the fresh mix. It’ll aid the dough’s maturity and enhance the gluten structure. But, if the dough has a long bulk fermentation time ahead of it (over 8 hours), you should be able to add the yeast, mix it in and continue leaving it to ferment.

2) The yeast was out of date

Yeast does have an expiry date. If you follow the guidelines on the packet, most brands of dried yeast should be used within seven days of opening. I know, it’s silly, right?

Dried yeast will keep for months if kept in the fridge, and fresh yeast can last up to a month, depending on how fresh the yeast was when you got it

A large block of fresh yeast keeps fresh for longer than a handful of crumbs.

How to tell if your yeast is passed its best?

Fresh yeast will start to dry out, and you will see it turning a dark, nearly charcoal colour in places. You can still use it at this stage, but it’s not as effective.

It’s worth adding a little extra or allowing more time for the dough to rise. If it gets to the stage where it is dry and hard throughout, the yeast should not be used.

If you are unsure if your dried yeast is still usable, take a small bowl of warm water and add a teaspoon of yeast and another of sugar to it. If it froths after 5-10 minutes, it’s good. If not, then it’s best to get another packet.

3) The water was too warm and killed the yeast

Many recipes request warm water to be used for activating the yeast. The temperature of this warm water should be 100-110F. If the water temperature exceeds 60C (140F), yeast will be permanently deactivated.

A sourdough starter should have nice strong bubbles running through it and smell fragrant and aromatic. It should at least double in size within 6 hours.

You can get around twice-a-day feedings by leaving your starter in the fridge – see sourdough starter feeding methods.

If this is not the case, it will take a long time for the bread to rise. This can cause high amounts of lactic acid to develop during fermentation.

Excessive lactic acid destroys the dough’s ability to hold its shape. This is the main factor for “Frisbee” bread.

Oven spring gives the bread a lift of around 10-20% of its pre-oven size. Oven spring is not solely responsible for raising the bread.

Bread should be almost, if not at full size when it goes into the oven. In fact, the bread shrinks as it cools, meaning the volume gains from the oven spring are largely lost.

Placing the bread in the oven when under-proofed will make it shoot up more than 20%. This often creates unwanted holes, ripped crusts and tunnelling in the crumb.

6) The dough was too cold

Yeast doesn’t need oxygen for the bread fermentation process, but it does require warmth.

Cold kitchens and cold ingredients slow the rate of dough fermentation. This is a significant reason for bread not rising or rising very slowly.

To remedy this, use a proofer such as this one from Brod & Taylor.

7) The dough needed to rise for longer

Sometimes the dough just needs longer than the recipe states to rise. With any bread recipe, it is best to watch the dough more than the time.

Learning how the dough should look and feel at the end of each stage of the bread making process is the most powerful skill in baking bread.

8) Too much salt was added

Salt inhibits the yeast, which slows dough the production of gas. This is great for supporting the gluten structure though too much salt can stop the dough from rising.

How to tell if you are using too much salt

Most recipes call for the amount of salt to be around 2% of the weight of the flour. The 2% also includes other salted additions, such as butter and olives.

Sometimes by accident, the salt gets added twice.

The only way to tell if there is too much salt is first to check the recipe has a maximum of 2.2% salt (although pizza recipes can go up to 3%).

Taste a piece of the raw dough. The flavour of salt should be available to the palette but not overpowering.

9) Too much sugar was added to the dough

Similar to salt, sugar defers water passing through cells in the dough through osmosis. Some sugar will make bread dough rise faster. However, too much sugar in the recipe will slow down the rise significantly.

Sweet bread recipes containing more than 5% sugar to the total weight of the flour will affect the yeast. To avoid the effects of osmotic stress, a specialist osmotollerant yeast should be used.

10) There was too much fat added to the dough

Fats lubricate the gluten found in the flour and prevent the development of strong, flexible strands of gluten. The addition of large amounts of fat at the start of mixing creates a tighter and more ridged gluten structure which fails to expand during proofing.

Adding fat during mixing often leads to dense bread. It is best to delay the addition of fats to near the end of mixing -after much of the gluten has developed.

It is challenging to do this as fats contain water or are a liquid at room temperature, meaning the dough can become wet and sticky when lots of fat is added.

To get around this, you could add half at the start of mixing and the remainder near the end. This utilises the bassinage method, often used to split the water addition.

11) The water contains too much chlorine

Sometimes chlorine or other agents used to clean the water are at such high levels that it destroys yeast or sourdough activity.

Make a batch of bread with bottled water to see if it improves the rise of the bread.

You can check with your local water board to see if they can give you any information on the quality of your water. They are expected to provide these details if requested.

12) Bulk fermentation was not effective

For a good rise, the flour must be matured. This is created by the action of the levain conditioning the flour. Organic acids mature the dough while the hydrated flour breaks down to present sugars to the yeast.

Bread needs long, strong and elastic gluten to be able to retain gas effectively as it rises. Without a good gluten stricture, the bread will not rise to its full potential.

Bread made at a warm fermentation temperature may rise so fast that the gluten structure remains too weak to capture the gas. A long bulk ferment or an autolyse will support this.

Use prefermented flour instead of long bulk fermentation

Instead of autolyse or long bulk fermentation, the use of prefermented flour in the form of biga, poolish, pâte fermentée or sourdough levain can be used.

Preferments introduce previously mature flour to the mix, reducing the development time of the dough.

These additions create different properties to long bulk fermentation in the bread. Preferments must be ripe when added for the maximum benefit of their inclusion.

If a dough comes into contact with too much airflow, it dries up, which can build a strong, dry layer of dough on the outside. This barrier is often called a skin. It can become so strong that the dough cannot rise anymore.

To prevent dough from “skinning up”, cover it during bulk fermentation and final proofing with a bag or sealed container.

Not covering the dough as it rises can also make the bread expand at the bottom during baking.

Commercial bakeries have proofers that add humidity and heat when proofing bread.

For most home bakers, a bag, box, or overturned mixing bowl is used, but if you want to level up, get a home proofer or make a DIY proofing box!

As an extra bonus: Consider your oven set up

Improving the oven set-up for baking bread will turbocharge your bread baking! It will not cure flat bread issues on its own, but it will give your bread a more professional appearance.

Using a preheated baking stone is pretty much a must if you are baking bread. It will help your bread to spring up in the oven, which is called oven spring. If you don’t already have one, maybe check this one out:

For crusty bread and a higher rise in the oven, adding water is required. The how to add steam to an oven for bread article explains how to do this correctly.

The addition of steam delays the setting of the crust to allow the bread to rise further in the oven.

When I first started baking, I went straight into a commercial bakery. The recipes were laid out for me, the equipment was amazing, the water tank forced me to probe the flour before it would release the water, and the proofer was set at a constant temperature… It was pretty easy, really.

The reason was there were very few variables. The ingredients were the same, the recipes were measured out, the environment was controlled, and the equipment was always constant. But when we bake at home, it’s not that easy! We don’t have the same equipment or environment. Yet by expanding your knowledge, you can learn how to eradicate the issues in your bread so that you can start hitting those grand slams!