What Is Bassinage In Bread Baking? 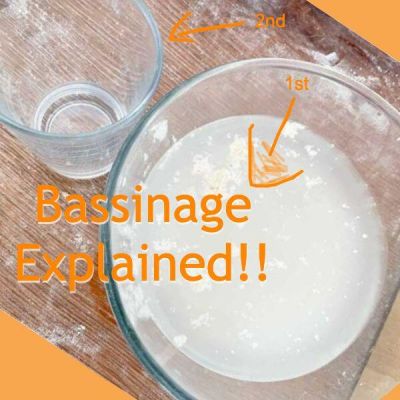 The bassinage technique is a secret baker’s trick to enhance an irregular open crumb structure. It does involve more effort, and it does take more time, but the results that bassinage produces are worth it! This technique is not for newbie bakers, but if you have mastered the basics of bread-making, bassinage could be for you. Read on to learn what bassinage is and how you can use it to improve your bread!

What is the bassinage technique?

Eau de bassinage is an old French technique used when making bread dough. It means “water that is bathed, moistened or added”. Basically, instead of adding all of the water at the start of kneading, some is retained and held back. The dough is kneaded, and then the” second” water is added near the end of kneading or during bulk fermentation.

Why should I use bassinage?

The bassinage method increases the potential hydration percentage that could be used in a dough. Irregular and more open cell structure appears in the crumb.

What bread can I use with the bassinage method?

Bassinage is often observed in bread that requires an open, soft crumb. I used this step in my authentic baguette recipe and my Italian ciabatta recipe. I believe it’s what makes them so good! This method even helps sourdough bread have an open crumb.

Adding the bassinage during kneading

If bulk fermentation is under 4 hours, the bassinage is typically added near the end of mixing, once the dough has reached 70% development.

How to do bassinage in a dough mixer

It’s much easier to use this technique when making the dough in a mixer. Here’s how it works:

1- When weighing your ingredients, separate 5% of the water in a second bowl or jug.

3- Reduce the speed to a slow knead

4- Keep mixing until the water is at least ½ absorbed. This can take a few minutes!

5- Once the water isn’t going to splash out of the bowl, increase the speed of the mixer again and knead until the water is absorbed. Now the gluten will stretch without tearing but still feel a little wet.

Gluten development at the end of kneading will be around 85% in this example. The remaining 15% will occur during bulk fermentation. If you make a no-time dough and skip the first rise, develop the dough to 85% gluten development before adding the bassinage. Keep kneading after the water is added until 100% development is achieved. You can learn more about gluten development in the windowpane test series.

How to do bassinage when hand-kneading

As in the previous example, remove 5% of the water from the recipe for the bassinage. Add the ingredients, except the bassinage water and knead the dough. In my how to knead dough guide, I explain how I separate hand kneading into three stages. The first comprises of a gentle incorporation, lasting around 2-3 minutes. This is followed by 5-7 minutes of “slow” kneading and 5 minutes of “intensive” kneading. Whether you follow my kneading techniques or not, continue kneading until the dough has reached 75% gluten development.

Return the dough back to the mixing bowl and add the extra water. Start folding the dough into the water, but you can punch or bash it around as you wish! Just keep it moving!

Once the dough absorbs most of the water, take it onto the table and continue kneading it with stretching motions.

After a few minutes, the water will be incorporated, and the dough will be kneaded sufficiently.

Doing the bassinage in bulk fermentation

For sourdough bread dough, mixing is kept to a minimum as the long bulk fermentation period allows the gluten structure to appear naturally. This means that we can’t add the bassinage at the end of mixing. Instead, the water is introduced during the middle of bulk fermentation. To gain the full benefits of bassinage, we should wait until the gluten has developed to at least 50%, but up to 70% development for sourdough is better. This is roughly the midway point of the first rise.

The second water can be gradually added in stages or all in one go.

1- Remove 5% of the water and store it in a separate bowl or jug. Here I added my starter to the first water.

2- Knead the dough gently for 3-5 minutes. Then place it to rest in a covered container.

3- After 2 hours of bulk fermentation, add the water before a stretch and fold.

4- Repeat stretch and folds every 30 minutes for 2 hours.

5- The water will gradually absorb, and the dough is ready to shape after 3-4 folds.

How much water should be reserved in bassinage?

5-8% of the total amount of water is typical for a bassinage. There’s no hard rule for how much water you should hold back. If you remove too much, you end up with a really dry dough, and the gluten becomes damaged. Too little, and you won’t notice much benefit in the final bread.

When shouldn’t I use bassinage?

If you are aiming for a close-knit crumb, typical of tin loaves and bread rolls, you wouldn’t want to use this method. Kneading a low hydration dough is more complicated than a wet one. Therefore, it’s easier to just add all the water in one go. Bassinage takes time and effort and is generally a pain! In the industrial world, it costs money. At home, it’s time and if hand kneading, mess! I still love to use it, and if you have a dough mixer, there’s little reason not to!

I don’t use it for every recipe, and neither should you. It’s to be kept in a back pocket and employed when it’s needed. What do you think of bassinage? Have you used it before? Let me know in the comments below: