How To Make Sourdough Bread Without A Dutch Oven 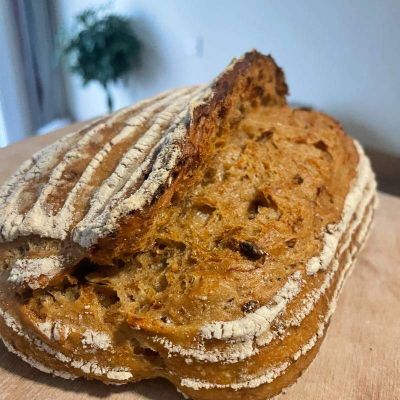 If you’re wondering what all the fuss is about when bakers use Dutch ovens to make bread, then you’re not alone. For decades bread has been made without the use of a Dutch oven, yet, in recent years, for home bakers at least the use of them is widespread. So why are Dutch ovens used to make sourdough? How do they work and can you still make decent sourdough bread without a Dutch oven? These are the questions I’m going to get to the bottom of today!

The key to baking sourdough bread!

When baking sourdough bread, or any type of bread that we want to be crispy and light crumbed, we need two things to happen. First of all, we need the oven to be at a constant high heat. This is key to baking sourdough bread evenly and getting a nice oven rise. The other thing we need is moisture. This can be added by water spray, a preheated tray or by trapping the moisture that escapes the bread as it bakes.

Why does sourdough bread need moisture in the oven?

Steam moistens the air in the oven and is attracted to the surface of the bread. A barrier of condensed water protects the outside of the bread from the direct heat of the oven. This allows the bread to rise during the early stages of the bake. We call this oven spring!

During the first 10-15 minutes, bread baked in a humid oven uses up the last bit of energy in the yeast and rapidly rises. Without steam, sourdough bread would be denser and have a softer crust. For a nice airy crumb and a thin and crispy crust, we need moist air around it when baking.

Can’t I just put the bread straight in my home oven?

Home ovens are quite big (in comparison to the size of the bread) and are often not powerful enough to react to a loss of temperature. This happens when the cold bread goes into the oven along with water to make steam.

Profession deck ovens have less free space and using three-phase power, can quickly adjust to the raw bread being loaded. They also have doors that can’t be pushed open from the inside to lock the steam in!

Most domestic ovens, especially ones with low power ratings, struggle with baking bread. Expect a lower amount of oven spring and an increase in the length of the bake. This is also bad for crumb freshness. As they are not well sealed, domestic ovens tend to not retain steam all that well. More steam has to be added which cools the oven further.

It’s not looking good for baking sourdough in a home oven!

Why are Dutch ovens used to make sourdough bread?

A Dutch Oven (DO) is commonly used to make sourdough for a handful of reasons. It creates a mini oven inside of your oven making it a personalised baking chamber for your loaf. Its benefits are:

When we make sourdough bread, there are already loads of variables that can change how our bread turns out. By keeping some of these consistent it makes it easier, especially as newbies, to make beautiful sourdough bread.

Do you need a Dutch oven to make sourdough bread?

No, it is possible to make great sourdough without a Dutch oven. Although, using one can certainly make things a little easier! Instead of a Dutch oven, bread can be baked on a baking stone, preheated in the oven, and moisture can be added to the oven. Baking bread like this can make bread that is just as good as those that use Dutch ovens, and sometimes it comes out better!

What does a baking stone do for sourdough bread?

The baking stone is preheated in the oven for around an hour. Once heated, the unbaked sourdough bread is slid onto the stone using a peel, where it remains for the duration of the bake. The stone absorbs heat and distributes it through the base of the bread.

The use of a baking stone helps the bread rise in the oven rapidly by quickly warming its inner core before the crust sets. It also evenly distributes heat to the bottom for an even bake – no more burnt or soggy bottoms!

Should I use a baking stone with a Dutch oven?

If you suffer from under, or over-baked bottoms on your bread or even a lack of oven spring, we can fix this. Instead of buying a new Dutch oven, try using the Dutch oven on top of a preheated baking stone. Every oven distributes heat differently so this isn’t necessary for every home baker. But if you are suffering from uneven bakes, this should fix your problem. Here’s the baking stone that I recommend made from fire brick. This is the same material commercial bread and pizza ovens use. It’s durable and absorbs loads of heat for the perfect crust!:

If you can’t stretch to a baking stone or need to bake right away, use the thickest baking sheet that you have. It will make a difference and when I don’t have enough time to preheat my stone (which takes about an hour), use a baking tray instead. This method has given me great results and you can invert the tray so it’s easier to slide the bread in and out. Here are a few other methods to consider:

Cover with a bowl method

Inverting a metal or glass or metal bowl over your baking sourdough traps the moisture that comes out of the bread, much like how the lid of a Dutch oven does. You can buy specialised bowls to cover sourdough, or just use any ovenproof bowl that’s big enough. It’s ideal to be able to see the bread however, not essential.

To use the cover with bowl method

Slip the bread on a hot baking stone or large tray and use the bowl to cover it. Bake for 20-25 minutes before removing the bowl with some decent oven gloves and bake for a further 10-15 minutes.

Underneath the baking stone or tray, another deep tray is placed, full of hot water. Once the water is boiling, place the bread on the stone and the water will fill the oven with steam. After 15 minutes, remove the tray and continue to bake for another 15-20 minutes.

The stone and preheated tray underneath method

My go-to method. Preheat a baking stone with a tray on the shelf underneath it. The tray needs to be able to withstand high temperatures and have a lip around the edge. Once the stone reaches temperature, drop the bread on the stone and pour a cup of boiling water into the tray below.

Making a pro bakers oven inside a home oven

I’ll be trailing this fully very soon, but initial tests have given fantastic results. Here, we effectively make a mini baker’s oven inside of your home oven! This setup increases the amount of heat it retains so won’t cool down as much when the oven is loaded up with bread. It may sound crazy but I’m most excited to use it! First off, prepare the dough. You can use my beginner’s sourdough bread recipe if you like.

Step 1: Place a deep tray at the bottom of the oven with lava rocks.

Step 2: Above the lava rocks goes the main baking stone.

Step 3: Above the main stone goes another baking stone that’s high enough to fit the bread between.

Step 4: Preheat the oven to 240C (465F) and test the stone has reached temp using an infrared probe.

Step 5: Place the bread on the main baking stone.

Step 7: Bake for 20 -25 minutes before opening the door to release the remaining steam

Step 8: Continue baking for another 10-15 minutes until golden brown

Many bakers will raise the heat of the oven 20-40 degrees higher than the baking temperature to compensate for the loss of heat. After the bread goes in the thermostat is turned down.

How effective are these methods?

They can work just as well as using a Dutch oven. But it does depend on the power of your oven. Less powerful ovens will struggle to regain temperature when the bread goes in creating a slightly sub-par crust.

If you find this happens to you, try the last option shown above of using lava rocks and two baking stones to retain more heat. Failing that, a Dutch oven may be the best way to go!

Benefits of not making sourdough bread with a Dutch oven

Baguettes, soft rolls, focaccia and many more varieties of bread can’t be baked in a Dutch oven as they won’t fit. You’ll need a baking stone for these to come out good so making another investment in a Dutch oven isn’t necessary.

#2 You can bake more than one loaf at a time

If you want to make more than one loaf, do you really want to be buying another Dutch oven? Personally not and if you are using a large oven such as a Rofco in your micro-bakery the expenditure of buying Dutch ovens to bake all your loaves is quite radical, and they take up a lot of space too.

#4 You will be able to make bigger bread

Heating your oven costs quite a lot of money, especially when baking at the higher temperatures bread requires. Why not save a bit of heating cost by making bigger loaves. You’ll be able to cut them in half and freeze them if you’re not going to use them up. Big loaves look pretty impressive too!

#5 Scaling up your baking operation

Pro and micro bakeries don’t use Dutch ovens so if you are considering selling your bread at a later date it’s worth learning how to make it without one. It may seem like a long way off now, but once you get the hang of baking amazing sourdough you might have a queue of neighbours and friends at your door!