A windowpane structure is generated when gluten development is at it's highest. As bakers, we are proud when the windowpane state is reached. To get a dough to the windowpane point it needs to develop a strong gluten matrix.

A well-developed dough when stretched out by hands should extend thinly without tearing and becomes translucent when held up to the light.

A windowpane structure is created by allowing the gluten in the flour to relax and lengthen, whilst generating strength in the dough by kneading and/or bulk fermenting correctly.

Benefits of the windowpane structure

Achieving a windowpane structure in a dough proves the elasticity of the gluten is at its peak therefore able to retain gas well.

The ability to retain as much gas as possible provides the pockets of gas to expand easily which gives a light appetising crumb to baked bread.

Reaching this stage of dough maturity is not essential to making good bread. Some recipes call for the dough to be kneaded for less, making a bigger oven spring and a small knit crumb. But for the best quality artisan bread with big holes and intense flavour, getting the dough to the windowpane strength is pretty important.

You may find benefit in reading this article about testing dough:

Further reading: How to tell if dough is kneaded enough

Before we get to the technical bits, developing dough properly can be done without correctly hydrating the flour, so let’s start with this.

How does flour hydration make a difference

Flour develops with the addition of water into gluten and various forms of starches. The starches evolve into sugars and are used by the levain to create gas and mature the dough. The gas is not a priority for creating dough with a strong gluten structure so we won’t concentrate on that side for this article.

When the protein particles in the flour are moistened by water they start to convert into gluten. Letting this happen gradually by leaving the ingredients in the bowl allows the flour to soften.

The moist, calm conditions let the gluten unravel to become nice and long. The gradual softening and gluten unravelling is one of the key reasons why autolyse is a really helpful technique used in bread production.

What happens during an autolyse

An autolyse is where the flour and the water are combined before the dough is kneaded and left to rest for 20 minutes to 2 hours.

We do an autolyse to allow the flour to soften and the gluten to hydrate to its full potential. For the gluten structure will be stretched easily by the gas bubbles it retains we need the gluten to be hydrated correctly.

Not enough water in the dough and the gluten will be forced to break short, fa. Too much water and the gluten matrix will be stretched out too far, preventing a decent dough structure.

Performing an autolyse before kneading enhances the gluten structure. Allowing the flour to hydrate slowly gives your dough the best opportunity to develop into a strong structure enabling it to retain gas.

How the dough matures

Lactic acid and organic acids that are created during dough fermentation to mature the dough. The maturation of the dough improves the gluten structure and allows the dough to retain gas better. The natural acids are necessary for good gluten development. Acid development increases in the dough over time, though it intensifies when kneaded or by increasing the temperature to encourage yeast activity.

How the windowpane structure occurs

As hydrated gluten is allowed time to develop the gluten will unravel into strong thin webs. These webs are the gluten matrix which retain carbon dioxide during proofing.

To help the dough achieve this stage we encourage organic acids to mature the dough. These acids are added by using prefermented flour or occur naturally in long fermentation.

Another way to speed the creation of a good dough structure is to knead the dough. Mix slowly to hydrate the flour for a long period (unless an autolyse was conducted) followed by a long mixing time at a faster speed. Typical mixing times would be 8 minutes at slow speed followed by 8-10 at fast speed.

If you would like more knowledge on the dough fermentation process I have a full in-depth guide that you may like to read.

At what point should the dough develop a windowpane?

The majority of the work required to develop dough to get to the windowpane structure happens through kneading. When using a mixer the dough will develop to a windowpane structure after 10 - 15 minutes of mixing, depending on the power of your mixer. This can be sped up by the use of prefermented flour or doing an autolyse before mixing.

Speeding up the process

We can speed up the process of gluten formation by mixing at a slow speed. Mixing helps to hydrate the flour and form a gluten matrix quickly, though a stronger structure will be achieved if the gluten is given time to unravel.

Autolyse helps to soften the flour and extend the length of the gluten. It starts the building blocks of the gluten to be able to create a windowpane structure. 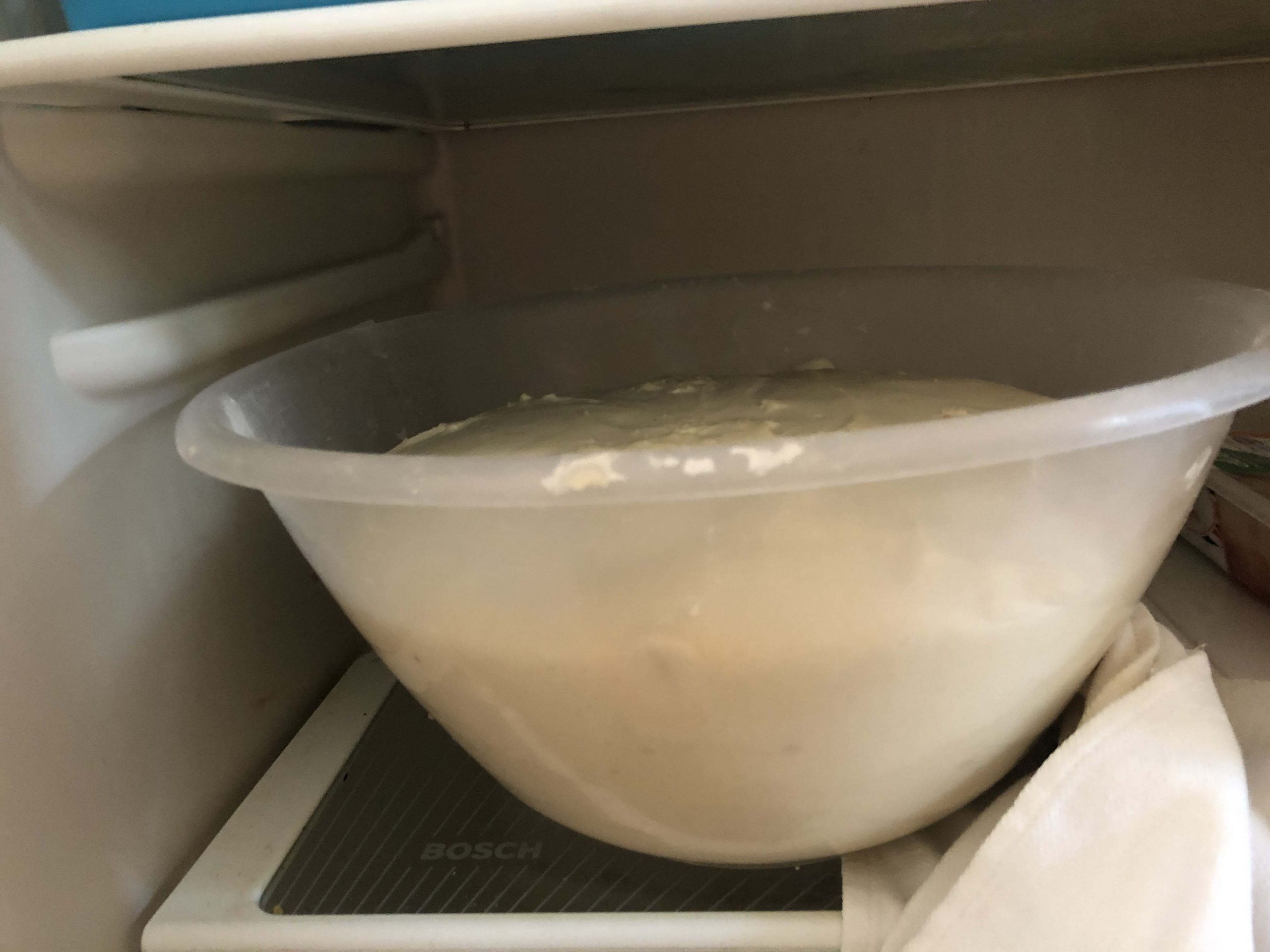 Instead of autolyse an extended slow mix time can be used to achieve a similar result. The gradual effects of autolyse are superior though using this technique can become impractical when autolysing several large dough batches in a busy bakery.

Do I need to use preferments for a good dough?

Using preferments such as sourdough, biga, poolish or pata fermentee not only include hydrated flour but enhance the dough with the inclusion of lactic and organic acids.

The acids mature the dough to create a better environment for the gluten to develop. The dough needs to mature to be able to create a windowpane structure. Without prefermented flour the dough can still reach the windowpane but will require extended mixing and bulk fermentation.

Can you mix too much?

If the dough is kneaded too much the bulk fermentation must decrease otherwise excess oxygenation is likely to destroy the bread.

Oxygenation occurs as the flour absorbs oxygen. The process occurs naturally as hydrated flour is allowed to rest. When the dough is kneaded oxygenation increases, especially when intensive or fast mixers are used.

Initially, oxygenation strengthens the dough but having too much destroys extensibility which leads to it flattening out or collapsing when tipped from the banneton.

If the dough is already at the windowpane stage as it leaves the mixing bowl the bulk fermentation must be made short or cold to reduce the chance of over oxygenation.

Why is the dough sticky?

This either occurs because the dough contains too much water for the flour. There is not enough gluten available in the flour, so the dough cannot bond to itself properly.

As the dough matures it becomes able to retain more water. Leaving a wet dough to ferment naturally I often find that after an hour or two I come back to it and it feels fantastic.

Organic acids in the dough that occur during fermentation increase the capabilities of the dough to retain water and become more cohesive.

When does dough become over proofed?

The dough gets over proofed when the dough collapses and cannot retain gas.

Common attributes of over proofed bread are:

What is the oil that appears in the dough?

You may notice the glossy, gluten film when mixing the dough, it links the proteins and the wheat germ oils which makes the dough smoother and more cohesive.

Seeing the oil film in the dough is a sign of a good dough that has been well developed.

Why can’t my dough pass the windowpane test?

Here are the reasons why your dough doesn’t pass the windowpane test:

You are checking at the wrong stage

The dough should be tested at the end of mixing. Unless you are planning a short bulk fermentation you shouldn’t be at the full translucent stage. Aim to get your dough to stage 4 in the windowpane test table shown above and allow the dough to relax and bulk ferment over time and check again.

As the dough is left to rest it will continue to develop its gluten structure. Bulk fermented dough is ready for shaping when it becomes gassy. We should be aiming to get to stage 5 of the window pane test table shown above at the end of bulk fermentation.

If the dough is tested at this stage and is not translucent when stretched, shape anyway and include more kneading or stretch and folds to develop the gluten next time you bake.

The end of bulk fermentation is too late for more gluten development, aim to develop the dough a bit more next time.

The dough has not been kneaded enough

Many stand mixers or kneading techniques do not develop strength in the gluten as well as they should. If you are noticing that the dough just gets warm instead of creating strong gluten strands try using my how to knead dough technique.

Alternatively, continue kneading for longer or using the stretch and fold technique to develop the gluten in the flour.

Not enough gluten from the flour

To arrive at a windowpane stage the flour used should be bread flour with a protein level in the range of 11-13%. Low-quality flour contains a higher rate of broken proteins in it which contribute to a weak gluten structure. It is possible for bakers to use flours with lower protein amounts, for example, all-purpose flour providing it is good quality flour.

For the gluten strands to be able to stretch out they need to be correctly hydrated. Too little water will stop the gluten from becoming stretchy and therefore prevents the windowpane stage from being achieved.

Too much water can also be an issue. Overly high hydrated dough can be sticky and unable to stretch out. Sticky dough may redeem itself after a long bulk fermentation or autolyse.

Wholemeal flour requires more water for optimum hydration, it also is slower to absorb water than white flour. When baking with wholemeal flour I recommend that you do a soaker or autolyse on the flour before kneading.

Fat and sugars protect the gluten and prevent it from being developed to reach its full extension. Allow the dough to be kneaded without adding fat or sugar initially, instead, add them towards the end of the mixing.

Delaying the addition of fats and sweeteners until the end of mixing encourages the gluten structure to be developed before the fat and sugar make it difficult.

If you are enjoying this guide, please take a moment to follow Busby's Bakery on social media by clicking on the links. If you think other bread bakers can benefit from this site, please share the page with them. It just takes a second and it really helps my motivation to keep writing more articles.

Why Bread Proofing Temperature Is Important For Top Bread