The three seeded bread was the first recipe that I designed! Based on French baking techniques it uses a seed soaker and a poolish pre-ferment. The seed soaker and poolish will need to be left overnight to develop so allow around 18 hours from start to finish. In warmer climates, it will be quicker to rise. 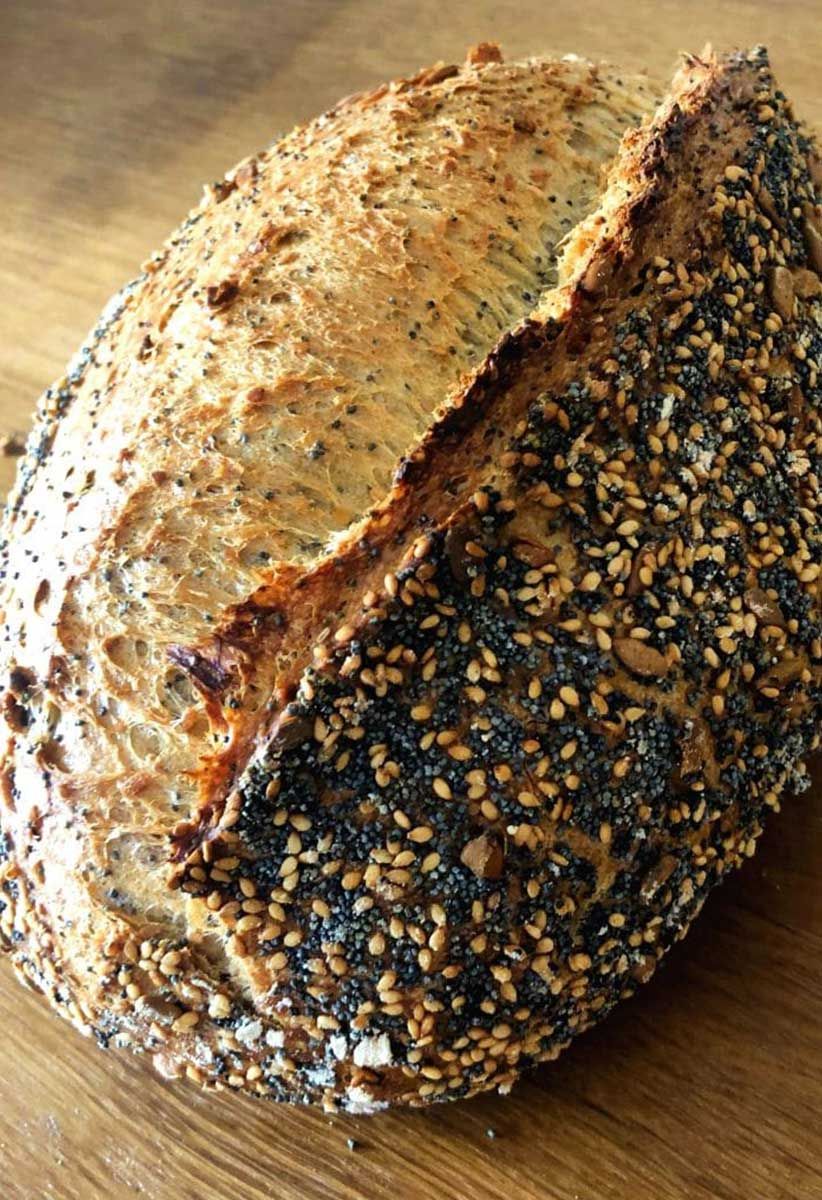 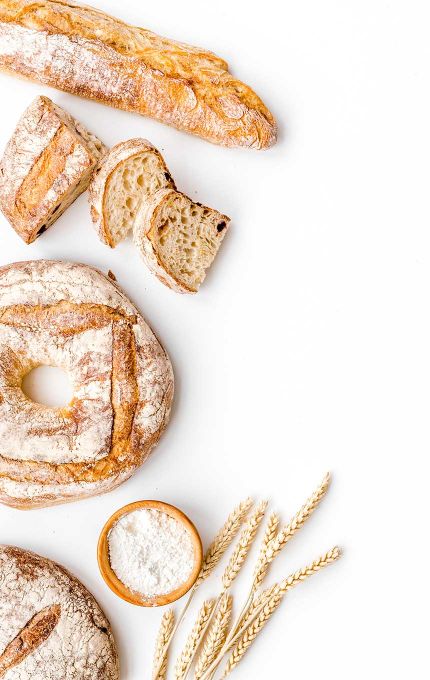 For the seed soaker:

How to use active or instant yeast to make this bread

If using instant yeast, divide the amount of fresh yeast used by 3 and follow the same method as fresh yeast. Active dried yeast needs to be activated before use. In this case, warm the water for the poolish to 35C (95F) – no higher. Add the yeast to the bowl, whisk and leave for 10 minutes to bloom. Combine the flour for the poolish with the yeasty water and place in the fridge for 10 minutes to cool. Return to the worktop and allow to ferment as above.

This recipe makes 2 medium sized loaves. If you want to change the size of the recipe, use the bakers formula.

I remember how I designed this three seeded bread recipe. Just after opening my bakery, there were calls for seeded bread from customers and staff. I had no recipe to adapt and nothing close. I copied and pasted a blank baker’s formula, added the ingredients I wanted and came up with a recipe. And after the first trial bake, it was perfect. Since that day it was the most popular bread in the bakery, and the recipe has never changed. Try eating this seeded bread toasted with a poached egg. The combination of nutty seeds plus the aroma of a small amount of rye is potentially life-changing!

What you need to make Three seeded bread

Yes, if you would rather use a Dutch oven to make this seeded bread recipe you won’t need to add steam to the oven. Simply preheat the dutch oven and drop the dough inside when it comes to baking. If you are looking to get a dutch oven, I recommend getting this one from Challenger.

1) Start the poolish and the seed soaker

Create the poolish and the seed soaker the day before. For the poolish, add the yeast to the water and whisk. If using dried yeast follow the instructions below. Next add the flour and combine with a dough scraper. Prepare the seed soaker by adding the seeds, salt and water and lightly stirring.

Cover both, and leave untouched at room temperature for 12-18 hours.

The poolish’s surface will be significantly covered in small gas bubbles when it is ready. It will also rise by around 50%. Weigh the ingredients and if using dried yeast, follow the instructions below.

3) Combine into a dough

Add all the ingredients alongside the poolish and the seed soaker to a large mixing bowl or dough mixer fitted with a dough hook attachment.

Using a plastic dough scraper, incorporate the ingredients together using a fluid half-turn method. Once it forms a mass, it’s ready to be removed from the bowl and kneaded on the table.

In a dough mixer:

Add all the ingredients including the poolish and the seed soaker to the dough mixer. Mix for 8 slow minutes on a slow speed and then increase the speed and knead for another 6 minutes. Once mixed, placed the dough in a mixing bowl and move to step 6.

Set a timer for eight minutes and stretch the dough slowly, but firmly using the heel of your hand. Knead until the timer sounds then place the dough back in the bowl, cover and put in the fridge for 15 minutes.

After the rest, remove from the bowl, back onto the table and start a timer for ten minutes. Fast knead the dough using the stretch, slap and fold method until the timer sounds. Return the dough to the bowl.

Take a temperature check, if it’s above 26C (78F) we’re going to put it in the fridge for the next stage, if it’s not this warm, leave it on the kitchen table. Either way, cover and leave to rest for one hour.

After the hour, degas or stretch & fold all four sides and return to the bowl.

Bulk ferment in the bowl for a second hour. Again, take a temperature check to decide whether it needs to go in the fridge.

Divide the dough into two equal weights, push the gas out of each by pushing down with your hands. Shape into rounds and bench rest on a lightly floured area of the worktop for 10 minutes.

Flatten the dough pieces and shape into batard shapes. Give them a light misting with water and roll in the seed mixture, the seam area is going to me at the bottom so no need to seed that area. Put the dough in the bannetons, seed side down.

Proof for 2 hours whilst preheating the oven to 250C (480F) with a baking stone above a lipped baking sheet. Prepare a peel by lightly dusting with flour.

Once the dough have risen over the tops of the bannetons turn the baskets upside down above a peel. The three seed loaves should fall out, but give the banneton a light bang if they don’t come out straight away. Cut with a large cut length-ways at a slight angle.

Slide off the peel into the oven, baking directly on the stone and add a cup of water to the tray below to create plenty of steam. Careful not to burn yourself! Lower the temperature to 230C (440F) and bake for 35-45 minutes, open the door temporarily to release the steam and lower the temperature to 210C (410F) after 25 minutes.

Once the bread’s crust is nice and golden, using the peel, slide it underneath to remove them from the oven so they can cool. 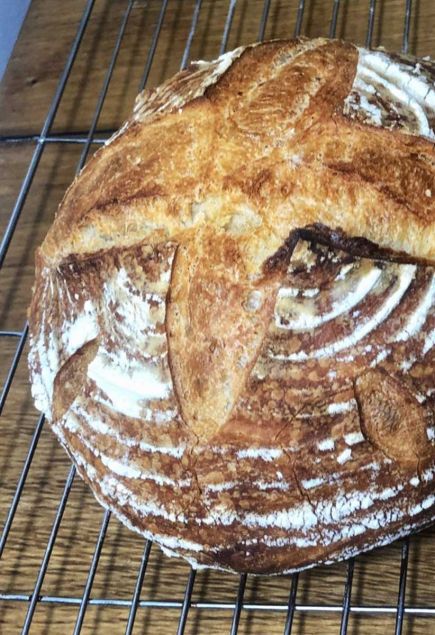 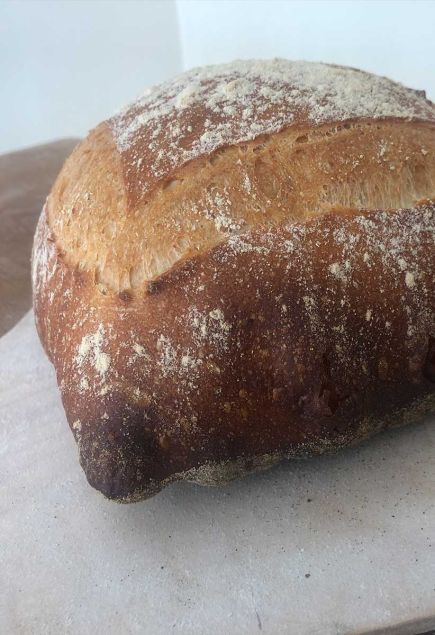