What Is The Reason For Sugar In bread? Is It Essential? 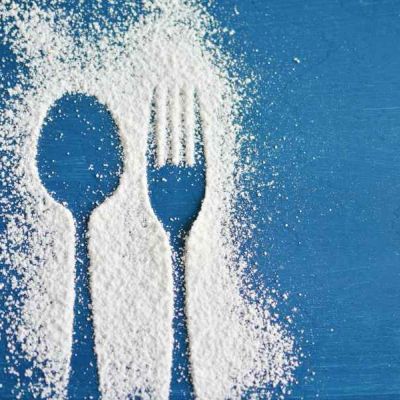 It’s a common misconception that sugar is only used for making food and drinks sweet. While sugar does sweeten food, it holds many more functions in bread making than just the flavour. So, “Why is there sugar in bread?”, “What does sugar do to bread?” and “Is it essential to include sugar in a bread recipe?”. I asked myself the same questions, and here’s what I found out.

Why bread has sugar

Sugar is included in many types of bread as it serves many functions outside of simply adding sweetness. Let’s take a look at each one:

Supplies the yeast with food

Yeast cells are living organisms which need food for their metabolism. Sugar, or its scientific name, sucrose, is a disaccharide made by bonding two hexose sugars, fructose and glucose.

Yeast produces enzymes that can break sucrose down the bonds to separate the hexoses. They will then enter glycolysis, where they are simplified further.

Enzymes break down starches (chains of sugars) into the simple hexose sugars needed to feed the yeast.

With the addition of table sugar in bread dough, yeast can operate at a faster rate as it is quickly broken down into two simple sugars, sucrose and fructose.

The availability of simple hexose sugars leads to a rapid release of carbon dioxide gas and therefore a faster-rising bread dough.

If sugar and oxygen are available, yeast will engage in aerobic respiration to produce C02.

For standard yeast bread, anaerobic respiration leads to alcoholic fermentation. Instead of just CO2, half of the sugars processed by the yeast will ferment and produce ethanol (alcohol).

During baking, the majority of the ethanol produced evaporates, leaving behind a beautiful aroma of burning and raw alcohol to flavour the bread.

Adding sugar to the recipe will provide food for the yeast, which when combined with oxygen forms a dough that will rise quickly and produce a lighter-tasting bread.

Not all of the sugar gets consumed by yeast.

The combination of table sugar with sugars derived from the breaking down of moistened flour can produce a lot of sugar.

Any excess sugars not processed by the yeast have the potential to provide sweet flavours in the bread, though not all sugars taste sweet.

The improvements in texture occur as sugar tenderises the gluten strands.

Dough containing plenty of sugar builds strong bonds with water molecules. The bonds prevent water from being available to the gluten and the yeast (called osmotic stress). This produces close-knit gluten bonds, which reduce the dough’s ability to stretch.

As the dough is not as stretchy, sugar in bread leads to a softer textured crumb.

Adding a small amount of sugar will result in a compact breadcrumb, great for rolls and dinner bread.

A significant amount of sugar in dough produces a light, fluffy texture, like in cakes, brioche and other pastries.

It also locks in the moisture in the crumb structure, slowing the rate at which water can escape.

Who doesn’t love those deliciously sweet brown edges of the bread, right?

Well, this browning is mainly due to Maillard’s reactions. These enzymic reactions occur when proteins are heated in the oven.

The inclusion of sugar in bread increases caramelisation alongside Maillard reactions to add further colour and sweet notes to the crust. A smoky aroma is also left to perfume the loaf.

Sugar can have a significant effect on the dough used in bread.

It improves the texture and colour of any baked good, as well as extending freshness.

But (arguably), the most prominent role of sugar is providing food to accelerate yeast activity.

Sugar can speed up the rise time during the proofing period so you should be careful not to add too little or too much.

Straying far away from a recipe can have a negative effect on your dough. I use only a little in my beginner’s bread recipe, just enough to provide a bit of extra food, but not enough to cause it to violently create gas!

The impact of using less sugar

Yeast feeds on sugar to produce carbon dioxide gas that will make the dough rise. So, if there’s less sugar, the rising process will be slower, and fewer of the above effects will be prominent.

The impact of too much sugar

Adding too much sugar to the dough can also slow down or inhibit yeast activity as sugar absorbs water.

When there is too little water to conduct osmosis (the passing of nutrients between cells), yeast activity slows.

In severe cases, the yeast becomes dehydrated, and gas production is halted.

Bread dough is high in sugar when it contains more than 1/2 cup of sugar for every 4 cups of flour or above 10% as a baker’s percentage of the flour.

If adding this much sugar to bread dough, you will need to use more yeast (3%) or an osmotolerant yeast.

Sugar creates osmotic pressure in bread dough which slows down the effectiveness of the yeast.

A little bit (less than 5%) of sugar will make a minimal impact on gas production. but expect it to slow when using more than 10% sugar due to osmotic pressure.

Whilst it is possible to add more yeast to the recipe to compensate for this, the bread can take on the odour and taste of yeast.

The best solution is to use osmotolerant yeast

Osmotolerant yeast is a special type of yeast that copes well under osmotic stress. It’s a lot more expensive than standard yeast types and only comes in a dried instant yeast format.

Being dried, osmotolerant yeast keeps for a reasonably long time. Its extra potency means you can make sweet bread such as doughnuts, challah and panettone with ease and consistency.

Is there a lot of sugar in bread?

The amount of sugar in bread varies by its different types. Most sliced bread contains about 2-4% of sugar content.

As more starch gets broken down into simpler sugars, the amount of sugar immediately absorbed when digested is higher.

Flour is made from grains, composed mainly of starch, protein, dietary fibre, and minerals. The amount of sugar in raw flour depends on the grain variety and its growing conditions.

It’s pretty common nowadays to see sugar as an ingredient in bread. With all the benefits of adding sugar, you can see why sugar is used in commercial production.

Although, the extra calories and quick production aren’t good for us!

Is white bread full of sugar?

White bread is high in carbs and low in fibre. This combination can result in higher blood sugar levels.

Besides that, health experts don’t advise that we consume a lot of white bread because:

Some types of bread may contain more sugar than you’d expect. If you want to make sure that you’re eating healthy, always carefully read the nutrition facts on the label.

Is adding malt to bread the same as sugar?

Malt is made by soaking barley in water until it sprouts, drying and grinding it to flour. It comes in two forms, non-diastatic and diastatic.

Non-diastatic malt is a sweetening agent. It isn’t the same as sugar but can be a form of sweetener in syrup form.

It has a distinct flavour, and it’s also used for making many yeast-leavened baked products.

Compared to other sweeteners, malt is considered more nutritious, so some bakers prefer to use it when making bread.

Diastatic malt flour is regularly used to add more of the enzyme called alpha-amylase. Using it increases the rate at which starch is broken down into simpler sugars.

Only a little is required. Overuse can cause a sticky bread texture.

Malt is available in the form of:

Today we’ve learned all about the impact of sugar in bread dough, what it does and what too much of it does! I’m sure you have suspected a few of them, but hopefully, you’ve learned one or two new impacts of adding sugar. I know I have! Let me know in the comments below what you found helpful and perhaps what you’ll try in the future.

Can I skip the sugar in a bread recipe?
Bread can still be made without adding sugar. However, removing sugar from the recipe will alter its texture, taste, freshness, and speed of the rise. Without sugar, yeast can still multiply by feeding on the naturally occurring sugar and starches in flour.
Do I need to add sugar when blooming yeast?
Warm water is necessary when you’re trying to activate active dried yeast. Sugar is added to prevent the yeast from running out of food and dying. As the sugar is consumed by the yeast before adding to the remaining ingredients, its addition has little impact on the characteristics of the bread.
Do I need to add sugar when using a bread maker?
If the recipe states that you should add sugar, add sugar. Not doing so will impact your timing and could lead to your bread rising too slowly for the baking program. This can cause under-proofed, dense bread, but feel free to experiment by adding more yeast or increasing the length of the rise on your program.
What types of bread are sugar-free?
Bread made with sprouted grains and 100% whole wheat contains more complex sugars alongside higher quantities of fibre. These types of bread are the best low-sugar loaves of bread you can consume. However, some bakeries will include added sugar in their recipe, so always check the labels.