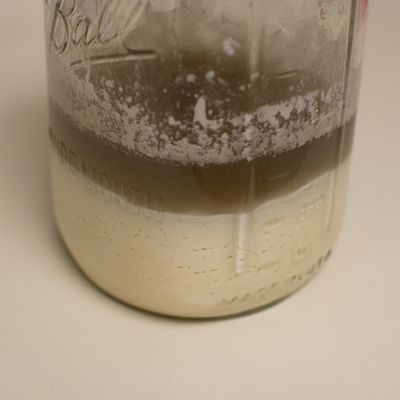 Do you want to see what is needed to resolve the most common sourdough starter issues? Or how about how to adjust the flavour of your starter to give it more of a twang? Well if this is what you are looking for, look no further!

This post covers several sourdough starter issues that I’ve encountered throughout my baking career. The most common reason for sourdough fails are bad recipes, for the amount of bad recipe’s I’ve seen on the internet, there are plenty of reputable ones as well.

I have a sourdough bread recipe for beginners and a step by step how to make a sourdough starter guide that you can use but this troubleshooting guide will work with all reputable sourdough recipes.

In order to troubleshoot your sourdough issue, use the contents table below to select the heading that’s the closest match or just scroll through to aid your sourdough baking knowledge.

What is the liquid floating on top of my starter?

That’s the hooch, it means the starter is hungry. The sourdough creates hooch on when it runs out of starch to feed it. It can be a variety of different colours. Hooch on top of the starter is no big problem and easily fixable.

What to do to prevent hooch on top of my starter?

Increase the amount of flour and water you feed the sourdough with. If it doesn’t work, increase further or add some wholemeal or rye flour along with the white. Some starters need a 1:5:5 ratio of starter, flour and water to feed, and some prefer even more.

What happens if I get fruit flies?

It’s extremely frustrating when fruit flies get into sourdough starters! They seem to love the sugars that develop in sourdough and if there is lots of airflow to the starter it is quite likely to happen.

Whilst it isn’t easy to remove them, there are a few steps you can follow.

How to get rid of fruit flies in a sourdough starter

I forgot to feed my starter!

I see mould on my starter, can I salvage it?

Most probably yes, providing there is enough good stuff at the bottom of the starter. Have a look at this how to revive a mouldy sourdough starter video. It is possible to receive a starter, even if it hasn’t been fed for months.

Do no bubbles and no rising mean my starter is inactive?

Not necessarily, sourdough is very hard to turn inactive, it will go mouldy first. Seeing no bubbles or rising in the starter will mean it is not active enough to proof bread so will need a bit of work before baking with. If you experience a lack of bubbles it may just need more feeding or bigger feeds.

My sourdough starter is still not rising

No sweat it’s a really common problem that is usually fixed with a couple of simple steps. View the sourdough starter is not rising post to see how it’s done.

When deciding if your sourdough is ready to use ignore the float test. It’s very inaccurate. Instead, look for plenty of bubbles and if it triples in size within 6 hours of feeding.

My starter smells weird, do I need to do something?

This is common so don’t give up. The usual cause is there are additional bacteria that have developed. These produce unwanted smells such as vomit, paint-stripper, cheese and apples. They are completely fine and point to a young or unmaintained sourdough needing more feeds or larger frequent feeds.

Moving to a clean container, improving hygiene and feeding regularly will usually fix the issue. A few days later and the starters ecosystem will naturally adjust to a balanced aroma.

If there is still no change, consider increasing to twice a day feeds. Failing this, include some rye or wholemeal flour into your refreshments or swap your flour brand completely for a high gluten bread flour.

The smell might be caused by unusual amino acids in the flour. In this case, changing to a new brand will be the best solution.

Here are a few issues that often occur:

It is normal for vomit smells in a new sourdough starter. After 14 days of regular refreshments, these smells will disappear and you’ll have a nice smelling active starter can raise bread.

Sourdough is created from yeast and organic acid bacteria which undergoes lacto fermentation where it creates lactic acid. This is the same process that sours milk and makes cheese and yoghurt.

The smell is perfectly normal for a young starter and after regular feedings, the unwanted acid bacteria will be lost and the authentic sourdough smell is created.

What do I do if my sourdough starter smells like cheese?

This is due to the lacto fermentation that occurs in the sourdough fermentation process as the organic bacteria creates lactic acid. Cheese undergoes a similar process and the smell is just a sign that the sourdough is young and needs to be fed for longer.

Adjusting the flavour of a sourdough

Common questions from sourdough bakers are how to give my sourdough more of a lactic twang or should I add vinegar to get it more acidic? To be honest, even if you are happy with your starter it can still be tempting to change it to something more interesting, perhaps more “like the pros”.

Or know how to do it if you ever want to.

So here goes, here is the way to alter the flavour of your sourdough starter and it’s all down to three things, temperature, hydration and the flour.

How temperature alters the taste of sourdough

A warmer temperature for fermentation produces more acid than cold. Dough proofed at 35C (95F) produces 50% more acids than it does at 18C (65F). Exposing the sourdough to higher temperatures can encourage unwanted bacteria to grow so it’s best to prevent it unless you’re after a particular effect.

Fine tuning the flavours of the bread

We’ve gone over some tips on removing odd and unpleasant odours so far, but what can be done to change the flavour of a sourdough starter so it tastes like our favourites. There are two acids that are prevalent in sourdough, lactic and acetic.

This offers the mature sour and creamy linger. To achieve this the ratio of ingredients in the starter should be altered to make the sponge wetter and fermented at a warmer temperature 32C (92F).

Acetic acid is the sharper vinegar flavour that attacks your taste buds straight away. It is the flavour that is synonymous with the sourdoughs of San Francisco.

Controlling the amount of starter

A common issue when making sourdough bread is running out or overproducing the amount of starter needed for a bake. Here are some solutions:

I don’t have enough starter for my recipe!

The fix for not having enough starter to make the recipe depends on how much is missing. If you’ve got 60% or more, replace the missing sourdough with flour and water to make the necessary amount of dough. It’ll just take a little longer to ferment. If I’ve been in a rush I have been known to chuck a pinch of yeast in – but shh don’t tell the sourdough police.

If you have less than 60% of the starter you need and have a few hours until you need to start, you can build up your starter.

Building up a sourdough starter fast!

Add the amount of flour and water you need for your recipe to the starter without discarding any of it. Place in a warm place 35C (95F) to ferment.

I have Too Much Starter!

Sometimes the opposite can happen and too much sourdough is made! It’s best to bake it or give some to a friend. Excess starter is a great way to get start conversations with the neighbours or in local groups on Facebook.

Failing to give the starter away, you can make a big batch of dough, divide into individual portions to put in the fridge and bake across the week, or bake and freeze.

Much as I don’t like to give this as an option, it was the right thing to do at the time. I had walked into the bakery and realised I hadn’t refreshed the sourdough starter the previous night. I had 23 sourdough loaves to make with 150 grams of starter. I wasn’t even close!

I refreshed my sourdough container using the starter that I had. I filled it as high as I should have done the previous day. Then I made the dough like I usual but added 1 gram of yeast per loaf.

That was just enough to help it. The result was good, but not as nice as sourdough bread ought to be. The crust becomes softer when you mix yeast with the dough.

An untrained person might prefer it, but a trained baker will taste the difference a mile off.