Can You Eat Sourdough Starter? 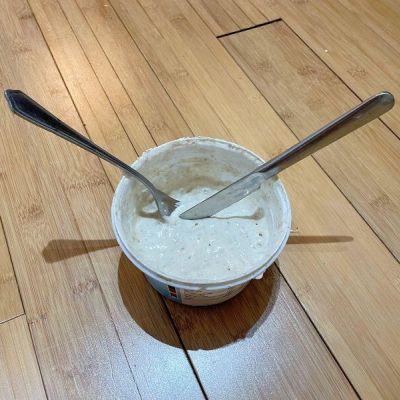 Eating raw sourdough starter might have crossed your mind once or twice. There are a couple of myths surrounding sourdough, so I set out to see if it’s safe to eat a sourdough starter. Then it occurred to me, why would anyone want to eat raw starter anyway? Let’s find out!

Sourdough starter can be eaten raw, but only in small amounts. If you’re going to eat sourdough starter expect to feel bloated if you have lots. If your digestive system is not in good shape, do not eat raw starter. There is a good chance you will be sick.

What’s in the sourdough starter that can make you bloated

A sourdough starter will contain hundreds of fungi and bacteria in a vast and diverse range. But this doesn’t mean that it’s harmful. Sourdough starter has an acidic environment caused by Lactic Acid Bacteria (LAB). These, combined with naturally occurring wild yeasts, cultivate in the starter. LAB and wild yeasts are the driving forces of the leavening process.

Because of this acidic environment, it is difficult for harmful bacteria to grow. This means a sourdough starter is relatively safe for consumption. Actually, it is believed by scientists that these strains of bacteria and yeast are good for humans to consume.

Sourdough undergoes a long and lengthy fermentation process. During this, it produces Lactobacillus bacteria and Saccharomyces yeasts. Many of these variants are also considered probiotics. Probiotics kill harmful gut bacteria and fungi.

So, how can eating raw sourdough make you bloated?

An active starter is still producing gas. And the temperature of the stomach is perfect for fermentation! This means the dough will rise inside a human body! Expect excess gas and a bloated stomach.

How can a sourdough starter make you sick?

If bacteria cannot be killed by the stomach acid, it will cause you discomfort. Bacteria enter the warm digestive system and break down food into sugars. As it does this, carbon dioxide is produced which will make you feel gassy and bloated.

Harmful bacteria can enter the starter from the raw flour used and multiply. Harmfu l bacteria can lead to you contracting E-coli or Salmonella Typhimurium.

How do you get rid of the bad bacteria?

As a ripe sourdough starter matures it becomes more acidic. After regular feeds, the starter remains stable and its cultivated bacteria and fungi create an environment where the harmful bacteria cannot multiply and their activity is restricted. At this point, a mature starter is relatively safe to eat.

To be ultra-sure that bad bacteria is removed you’ll have to kill off all the bacteria in a starter. To do this, apply heat. Bacteria and yeast in bread dough die when baked.

The temperature bacteria die is 60C (140F). Sourdough bread is usually baked at around 230C (450F), that’s plenty hot enough! Given this, baking sourdough will kill off any harmful (and good) bacteria present.

The importance of food hygiene when handling sourdough

When working with potentially harmful bacteria, it is best to follow some basic hygiene practices. They will keep the starter healthy whilst lower the possibility of bacteria passing around the kitchen.

The secret to having a good and safe sourdough bread is a healthy sourdough starter. If you starter shows the following signs, it is a bad starter and shouldn’t be used:

If any of these are seen, do not eat the starter! Especially raw! You will likely get ill. These signal that the starter has harmful bacteria which are not safe to consume.

There will be a few bad ones that make it into the dough. The baking stage will kill them off, making the bread perfectly safe for consumption. Yet, too much eating of a raw starter can lead to severe bloating.