Have I Got A Bad Sourdough Starter? 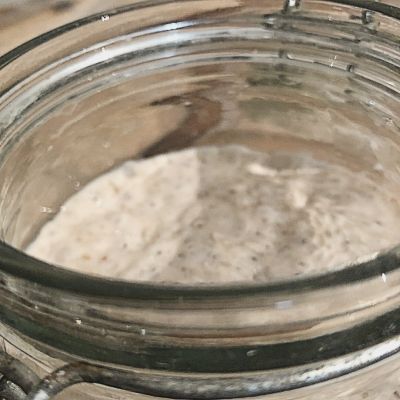 Is your sourdough starter causing you concern to the point at which you’re wondering if you need to ditch it? Maybe it’s the smell (or lack of), the number of bubbles, how well it rises, mould, or possibly a watery liquid on the surface that’s making you panic? Well, not to worry, I’ve got you. Here’s a short guide to tell if you have a bad sourdough starter, or if it’s got the potential to be badass!

The only reason to throw a sourdough starter away is mould. It’s possible to recover a mouldy starter, but it’s usually so deep-rooted that it’s quicker to start a fresh one. A starter that lacks bubbles is not so bad that it needs to be thrown away. Completing regular refreshments and warming it up will usually fix it.

Here are the common scenarios that you may be encountering. By using the tips shown you’ll be able to tell if your sourdough starter is really that bad, or just in need of attention. Use them, comment below if you have any questions and you’ll be making your favourite sourdough bread recipe in no time!

Is a watery liquid on the surface of my starter a problem?

This is just hooch, and if you are encountering it you might find that it has a strong smell! It’s perfectly normal for hooch to appear on a starter, it’s not a massive problem but you’ll want to prevent it.

Hooch is excess alcohol produced by the wild yeasts and crops up when the starter is hungry.

To stop hooch, increase the size of your feeds (increase the ratio of flour and water to the old starter), and/or feed it more regularly. Active starters are fed two, and sometimes even three times a day!

Once it’s nice and active, you can store it in the fridge to reduce the regularity of the feeds if you wish.

What if the liquid on the top of my starter has turned grey or black?

This is quite common, and not a problem. Just check that it has not turned mouldy, bright orange or green. If it has you should read the steps for a mouldy starter shown below. Otherwise, just stir the hooch back in and refresh.

As a new starter develops or an old one recovers, it takes time to culture the correct bacteria. Immature starters can encourage the growth of the wrong types of bacteria which create esters and aldehydes. These release strange smells such as bananas, paint-stripper and cattle feed. This is perfectly normal and there’s no need to start again. Continue to feed regularly. Providing you’re consistent with your feeding routine, a healthy starter will prevail.

The smell of a starter is in my view the best way to tell if it’s mature enough to bake with. Consider warming up the starter if the problem persists for several days. View my sourdough starter troubleshooting page to learn how to fix a starter.

There’s little activity in my starter, has it died?

A starter will only die if it gets too hot. Unless you’ve baked it, then chances are you’ll be able to make a few tweaks to repair a starter with low activity.

If the starter’s activity (bubbles) has slowed down recently, think: Has something changed? Are you using new flour? Has the temperature changed recently?  Fix your starter by making more regular feedings, adjusting its temperature to the 25-34C (77-93F) region or using quality flour.

I changed the flour in my starter and activity has lowered?

A change of flour will lower activity initially. Even if you switch to a more mineral-rich flour to boost the ecosystem, it will take a few days for the starter to adjust to the new flour and its bacteria.

If you want to change the flour whilst continuing to bake. Remove a portion of the existing starter to make the new one alongside refreshing the old one. You can continue to bake sourdough with the old one until the new one is good to go.

My starter has changed since the summer/winter

If your starter is being kept in a new climate, it is the likely cause of any “why is my starter not bubbling?” scenario. Cooler climates slow the activity of the yeast and acid bacteria which powers the levain. Keeping it in a warmer environment such as near a radiator will allow it to kick into action. View my article on how to warm a sourdough starter.

Why has my starter gone bad since relocating?

Different air pressures, humidity, bacteria and temperatures affect the activity of the starter. It is most likely that after a week of regular refreshments it will have recovered. If you run into problems with your starter rising, follow the guide here on how to make a sourdough starter rise.

I poured hot water on my starter, have I killed it?

The big question is, “Are there any bubbles?” If so then a handful of feeds will bring it back to normal.

Raising the temperature of a starter to over 70C (160F) will deactivate the bacteria it is built upon. That said, a starter will still deteriorate if it passes 39C (102F). How warm it gets and how long it is kept warm will affect the amount of damage done. The more damage, the longer it will take to repair.

I left the starter uncovered and it has developed a dry crust?

If you peel the crust away you should find a moist starter awaits you. You can build up refreshments with this until you have enough to bake.

What if I added lemon juice to a starter? Asking for a friend…

If you add lemon juice to a starter it’s unlikely to make much difference. Lemons are more acidic than water, but not as strong as an active starter. It should be ok to use but refresh for a few days if you’re worried.

I see mould on the starter, is it bad?

It’s important to take care of your starter. If you neglect it for too long it’ll develop mould or bad bacteria which taints the flavour. Mould can appear in various colours and is typically fuzzy in appearance. Bad bacteria can be indicated by an orange or pink tinge/streak on the surface (or sometimes inside). Once your weakened starter has lost its natural ability to ward off intruders, it’s time to start over!

It will be overrun with mould and undesirable microbes. You can try and fix a mouldy starter by retaining a small amount to be rebuilt as I did in my how to fix a mouldy starter post. But it takes a while to get it fully active again, so you’re probably best to declare your starter is “bad” and start again.

How best to keep a starter

The best way to prevent a starter from going bad is to look after it as best as you can. Here are a few tips aside from following my sourdough starter recipe to help to keep it active: