What Ingredients Are Allowed In French Bread? 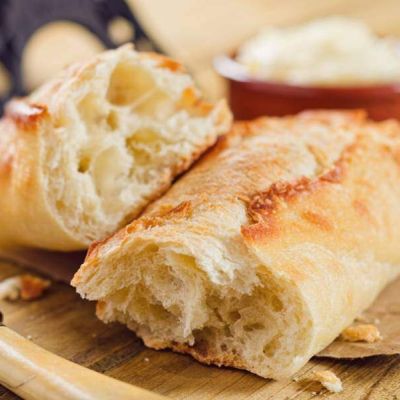 Many modern bakers add ingredients to their dough to enhance texture and keeping quality. These fall under the category of dough improvers. Some of these additives are recognisable kitchen ingredients such as vegetable oil or butter. These conform to the “clean label” approach that many bakeries in recent years now follow.

Some dough improvers are enzymes which are already contained in the ingredients used so don’t have to be listed on the label in some countries. Think of them as an eq balance on a music system that lets you tweak the pitches that you want to bring out.

Some are well-known dough improvers or conditioners in the industry that have those ugly scientific names such as “diacetyl tartaric acid ester of mono- and diglycerides” or “dextrins”. You might have seen these on labels and wondered “what the F*@ am I eating here?”.

Well, in France they have strict rules which regulate what can, and what can’t be used in bread. And while these regulations have originated since “Le Décret Pain” was signed in 1993, it’s perhaps not as strict as you think.

What are dough improvers?

Dough improvers are ingredients added to the dough to make the structure, flavour, texture or keeping quality of the bread. The difference between dough conditioners, emulsifiers and dough improvers is a little murky. Each one has a slightly different role. Maybe to target a certain area of weakness, such as gluten bonding or to enhance the overall texture of the bread to make it softer.

The majority of usage for home baking or professionally is through pre-mixes. These are combinations of dough improvers and enzymes, often mixed with salt and flour or vegetable fat. They are added to the dough alongside flour, water and yeast. Commercially they are sold in “mix bags”, i.e. 1 sachet per bag of flour. But in home kitchens, they need to be weighed before entering the mixing bowl.

Dough improvers make dough more stable. This produces an easier dough to mix, handle, shape and rise. This makes it an easier way to produce great bread without needing to be so well trained. They also make it possible to replicate classic bread types from around the world in the same environment without importing foreign ingredients.

What dough improvers can be used in France?

Popular belief is that only flour, water, salt and yeast can be used to make French bread. France is the home of artisans, yet this statement is not true.

In addition to basic bread ingredients, gluten, deactivated yeast, 2% broad bean flour, 5% soya flour and 3% malted wheat flour are permitted. The only enzyme allowed is fungal amylase. Ascorbic acid or potassium bromate are not permitted. Percentages are based on the total weight of the flour used in the recipe. The dough or bread must not be frozen at any stage.

Oil or any other fats are not permitted, either in the recipe or when greasing bowls and tins. Any bread types that contain butter or eggs (such as brioche) are considered a pastry or viennoiserie.

Pains spéciaux can use any additive authorised by the EU. Spéciaux dough is also the category of bread where non-flour ingredients such as oats or grains are used. It can be frozen or par-baked and reheated on-site if required.

Can yeast be added to sourdough bread in France?

The traditional French sourdough, “Pain au levain” must be made from a starter of wheat or rye flour and water. It must have a pH of 4.3, or below. This is a health and safety reason as it’s the threshold for killing off any harmful bacteria. Acidity must be at least 900 parts per million. Yeast (Saccharomyces cerevisiae) can be added to sourdough bread when kneaded, but cannot be used in the starter. A maximum of 2% yeast can be used.

Are dough improvers banned in France?

No, but bread is categorised by the additives allowed in each type. In pain de tradition française, very few additives are authorised.

Are enzymes used in French bread?

Enzymes may be used in pain courant Français and les pains spéciaux. In traditional French bread (pain de tradition française) only fungal amylase is allowed. Malt flour, which contains the enzyme, amylase is authorised for all bread types.

Is it illegal to put preservatives in bread in France?

In certain bread types, yes it is against Le Décret Pain to include artificial ingredients to preserve bread. Instead, bakers will utilise natural ingredients such as soy flour, alongside extended fermentation and quick baking times to extend the life of bread.

Do French bakers use sourdough?