What Is The Difference Between A Poolish And A Levain? 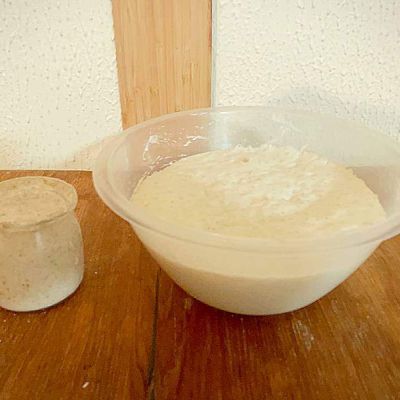 A levain can refer to any type of leavening agent, yet it can also be used to solely describe a sourdough starter. Because the word, levain has two meanings, bakers are easily confused! There is even a third meaning that some bakers use! Who’s wrong? No one really! In this article, I hope to clear things up so you know what others are talking about. Where going to cover a levain is, what a poolish is, and the difference between a poolish and a levain.

What is a levain?

Levain is the French word for “leaven”. It represents any type of leavening agent for raising bread dough or cake batter. Yet “levain” is sometimes used to describe the natural leaven, sourdough. The use of the word in this way is widespread through the familiarity of Pain au Levain. This is a popular French sourdough bread that’s eaten across the world.

In another use of the word, a levain is a piece of sourdough starter that’s prepared to make one batch of dough. A portion of the starter is removed from the Motherdough (mature starter). It’s then fed and once risen, added to the remaining ingredients to prepare a dough. The ingredient weights are provided by a recipe and scales are used for exact measurements. This method is also known as a “Chef”.

A levain, in the context of this article, will be referring to a sourdough starter.

What is a sourdough levain?

The culture serves as a breeding ground for wild yeast and naturally occurring bacteria. It ferments intensely, resulting in an active starter that can make bread dough rise. The leavening ability of the starter is provided by the cultured yeasts and organic acids (LAB) producing gas.

Is it levain or leaven?

“Levain” is how that the word is spelt in French. “Leaven” is the English equivalent. Because of the influence France has in bread making across the world, the French version is often used. But both ways are acceptable. It’s more typical for Americans to spell it “Leaven”, where countries nearer France such as the UK use “Levain”.

What is a preferment?

Preferments, such as a Poolish or its Italian relation, Biga are made from a mix of flour, water and yeast. Portions of the recipes flour, water and yeast are combined, covered, and left on the worktop. The mixture is left to mature for 12 -18 hours. During this period a gluten structure develops while the yeast ferments available sugars in the flour.

As the preferment reaches maturity it produces several gas bubbles and rises. The prefermented flour mix is then added to the remaining ingredients, ready for mixing.

Dough made with a preferment will be more mature and flavourful, thus, reducing the amount of time needed to bulk ferment. A sourdough levain is also produced by fermenting flour. It will have a higher level of maturity and is capable of producing more gas, yet is still considered a preferment.

Why use pre-fermented flour?

Over time, yeast begins anaerobic fermentation. This is where the simple sugars in the flour are consumed by the yeast cells to produce carbon dioxide and ethanol. At the same time as fermentation, enzymes react with starch to produce sugars. This leads to a sweeter flavour and the production of organic acids. A combination of ethanol, lactic acid bacteria, acetic acid, and various other organic acids mature the dough. They provide the following properties to bread dough:

Poolish, as the name suggests, was introduced to France by Polish bakers. It’s a yeasted pre-ferment made with equal parts of water and flour and a small amount of commercial yeast. This preferment will look like a shaggy at first, but by the time it peaks, it becomes a strong mass.

A poolish takes about 15-18 hours to rise and is usually made with medium-strength protein flours. It contains just 0.25% or less fresh yeas. Due to a poolishes high viscosity, this is plenty to ferment the flour.

When a ripe poolish is added to the dough, it will impart a more complex flavour profile to the baked bread. Using these pre-ferments will also enhance the texture and extend the shelf life of the bread as mentioned above.

What is the difference between a poolish and a levain

While both of these pre-ferments can improve bread quality. The main difference between them is the extra acidity found in a levain. It provides a more intense flavour and higher leavening ability not found in a poolish. Let’s consider how they compare:

– There is more acidity in a levain

A levain has a much higher acidity level because it uses them to create gas alongside wild yeasts. Due to its overnight fermentation, poolish contains organic acids but a much lower ratio than a mature levain produces. Bread made with a poolish is less sour than bread made with levain.

-The hydration of a levain can be changed

A poolish has a strict level of 100% hydration, while a levain is more flexible with its water content. Bakers preparing a sourdough levain can take control over the flavour profile in their bread. They can do this by adjusting the hydration level and the temperature of the starter.

– A poolish is easier to prepare

Poolish preferment can be prepared 12-15 hours before a baker is ready to bake. Yet a levain takes around 2 weeks of cultivating before it is ready to use. Sometimes more. Since it’s a living culture, it requires daily discarding and feedings with fresh flour and water.

– A levain is more complicated to create

Making a levain takes a bit of effort and skill to master. Learning to tell when it is the best time to feed and use a levain needs a little experience. Whatsmore, each starter has its own character derived from its environment and the ingredients it uses. Parenting a levain is much harder than building a poolish.

– A poolish can mature yeasted bread

Whilst, in reality, a levain could be used, a poolish is often added to yeasted loaves to add dough maturity. When making some yeasted bread types such as soft rolls their bulk fermentation rise is removed. This means that during proofing, the yeast will produce gas through aerobic respiration, instead of fermentation.

The result is a faster rise and a lighter tasting bread. With the addition of prefermented flour, bread made in this manner will be more flavourful, soft and have a better oven spring. A sourdough levain could be used instead, but its flavour is often thought to be too overpowering.

Poolish vs levain – What’s the best?

If you’re a beginner baker, it’s best to start with a poolish. It doesn’t require as much skill or commitment, so it will be a good starting point for you. It’s a fantastic way to get a feel of how prefermented dough works. You can make outstanding bread with a poolish, here is my baguette recipe with poolish -it’s great!

That said, sourdough is more popular with consumers and home bakers. You’ll be able to connect with more people to share recipes and tips if you make bread with a levain.

Does poolish bread taste like sourdough?
Because of the enhanced dough maturity found in both of these types of bread, they have a similar taste and texture. A poolish-made bread will taste sweeter than sourdough bread. Whereas a sourdough-leavened bread will have a more intense flavour and (often) an acidic “twang”.
Can I replace sourdough starter with poolish?
Yes, you can replace a starter levain with a poolish. Just replace the starter quantity required with flour and water 50:50 with a pinch of yeast. Leave overnight and add to the dough ingredients when it reaches its peak with an extra pinch of yeast.
Is poolish a sourdough starter?
A poolish uses yeast to ferment the flour whereas a starter cultivates various strains of yeast and organic bacteria. Both are a type of prefermented levain which are added to bread dough. A sourdough starter takes longer to produce and has more flavour than a poolish.
How long will my poolish dough take to bulk ferment?
A dough made with a poolish shouldn’t take as long as one made with a levain. At a proofing temperature of 75 degrees, bulk fermentation should last 1-3 hours. This can be increased by adding more yeast to the dough or warming it up.
Does a pre-ferment help oven spring?
A bread dough that contains fermented flour will be easier to stretch as it rises during the oven spring. This will create bread with a big oven spring. It will be without large holes or imperfections in the crumb.