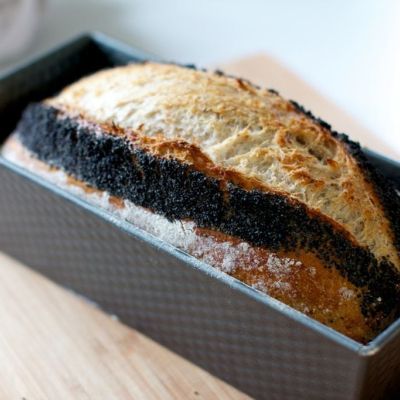 Though not strictly artisan baking, many bread producers use improvers to benefit the dough. This article is going to show to you a quick dive into how to use dough conditioners and dough improvers.

Here are a few of the common additives that are added to the dough before mixing. You can pick these up individually or purchase them in the form of a bread improver mix. There are some household items and also specialist bread products here. Let’s take a look:

Bread made quickly can often include a dash of vinegar to replicate the missing acetic acid that is naturally produced. The benefits of acetic acid are mentioned in this article about the dough fermentation process.

Acetic acid matures the dough which is very good for gas retention, flavour and aroma. Be careful not to add too much though!

Soy is a common additive to bread. Its use is slightly controversial though, over and unnecessary use can destroy bread properties. Adding a small amount (less than 1%) to the flour improves dough handling, creates more consistently proofed bread and adds a small amount of volume to the bread.

Bean flour aids oxygenation which gives the dough strength initially but over time causes bleaching which takes away flavour and colour from the bread.

You can increase the rate of fermentation by adding cereal or fungal amylases. The most common of these additives in modern bread making is malt powder.

Malt flour increases the activity of the fermentation and the colour of the crust. The result is a better rise, better taste, longer shelf life and a stronger dough to handle. Malt powder is commonly used in industrial production and increasingly by home bakers. It replicates the organic activity created by long fermentation so is often used in short fermented bread.

It is not a good idea to add malt flour to the dough which is going to endure a long fermentation. A long-lasting development period with additional cereal or fungal amylases exhausts the yeast and leads to the bread over fermenting. A common trait of over fermenting bread dough is a gummy tasting crumb after baking. A little malt flour added halfway through a long bulk fermentation stage can give the dough a helpful boost.

Many artisans and home bakers still steer clear of adding malt powder as they prefer bread to be made from the minimum amount of ingredients and tend to use long fermentation times. I use it when making faster bread occasionally, it isn’t essential though I can notice an increase in flavour.

This is the most common addition to modern-day bread. It’s found on pretty much every label in the supermarket bread section. The reason for this is that it is pretty effective! Ascorbic acid speeds up the mixing process by encouraging more oxygen to be absorbed and enhances the strength of the gluten. Using this method removes the need for a bulk fermentation period and so makes a “No time dough”.

Bread that uses this ingredient will benefit from a higher rise, faster mix times, more water absorption and a shorter production time. The ascorbic acid disappears when baking without a trace making the use of it completely harmless. But…

As there is no bulk fermentation stage when you use ascorbic acid, the dough will lack much of its natural flavours created by the traditional fermentation process. Organic acids are often created by supplementing the dough with malt flour and/or other enzymes. Accelerating the amount of organic acid which is created will produce a more appetising bread flavour and crumb/crust structure.

Using ascorbic acid without other improvers means the natural flavours and aromas of the flour are pretty much lost. The starches in the flour do not break down correctly without a long fermentation period making the product harder to digest.

That said, there is a good reason that ascorbic acid is used in nearly every bread product made commercially. The loss of flavour can be positively traded with an increase in softness, easier dough handling and a faster-made bread. So really, it’s up to you. Here’s a link if you want to get some for yourself:

Should I use dough improvers?

I think that you can make fantastic bread without the use of dough improvers so I wouldn’t want anyone to think that they are needed to make bread. If you are looking to make bread quickly or make softer rolls or bread you might want to experiment by using some artificial help. Likewise, if you are looking to improve a recipe, why not test if a dough improver can help?

A recent test that I tried was to use dough improvers to get my croissants to rise higher and be lighter tasting. To improve my croissant recipe I added some ascorbic acid to the dough and it did give them a better rise.

What I wouldn’t recommend is using improvers without expecting a particular result. Dough improvers can improve the dough however, they lower its flavour and characteristics that naturally occurring acids bring in organic fermentation. Why not adapt my beginner’s bread recipe by using some of these improvers?