What Is Malt Flour And How To Use It For Bread 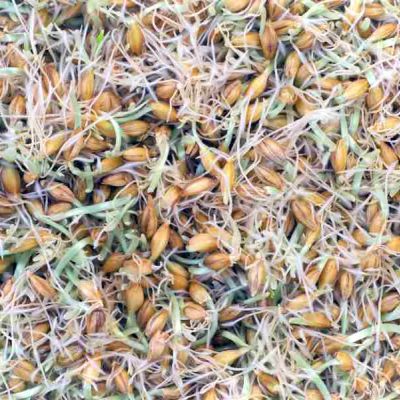 You may have seen malt flour in the ingredients of a bread recipe or packaging? It’s one of the most common dough improvers in home and commercial bread baking. One of the reasons for this is because it’s a natural product and is really easy to get hold of. Just search for “malt flour” on Amazon and you’ll find many choices of brands and sizes (or just click this link). Malt flour is found in many baked goods like pastries, pies, muffins, and more. If you have questions such as “what is malt flour”, or “how to use malt flour in bread?”, this guide is for you.

What is malt flour made from?

Malt flour is made from malted barley. After harvesting, barley grain is left to sprout in water. After the barley has sprouted it is then dried. During the drying process, the malt produces an enzyme called amylase, in abundance. Once the grains have dried out, they are ground up into a powder form, which becomes malt flour.

The role of amylase

Amylase is an enzyme that breaks down starch into sugars. It’s produced by yeast cells, but not in a high concentration. Both alpha-amylase and beta-amylase work together, performing slightly different duties. Complex sugars are broken down into simple sugars such as maltose or glucose. These are then processed by yeast cells to increase overall carbon dioxide production.

The water-binding carbohydrate, dextrin is also produced when amylase is active in dough. Dextrin is also a popular additive in soft bread itself. It binds water to produce a soft, moist crumb.

Diastatic malt flour is simply ground malt. It contains a high quantity of amylase. Its purpose is to improve the quality of the flour and/or the dough. This version is not a substitute for regular flour and must be utilised in very small quantities.

This type of malt flour is kiln-dried where the amylase enzyme is deactivated. Non-diastatic malt is used for flavour in bread and other bakery products. It’s extremely rich in the reducing-sugar, maltose. The extra sugar sweetens the bread and provides a browner crust. The flavour of non-diastatic malt flour is a slightly sweet, roasted-nut smell that’s perfect for wholesome baking styles.

Malt flour is reasonably high in protein (7-10%) so will offer some binding properties, similar to gluten.

How is malt flour used for baking bread?

When flour has little hypodiastic activity it will be slow to break down starch into sugars. This makes the dough rise slowly. Including a little diastatic malt produces cereal amylases which accelerate the denaturing of the starch. This leads to bread that rises faster in the first and second rises and benefits from an enhanced oven spring. The dextrins produced by the extra amylase form a softer and more moist texture to the bread.

As diastatic malt flour speeds up the supply of sugars available to the yeast. It’s use is a popular way to accelerate fermentation without the extra calories that sugar provides.

Because of the carbohydrates produced it will change the colour of the crust to a dark, reddish tan. The extra browning of the crust during Maillard processes, will perfume the loaf to enhance flavour. Additionally, malt flour helps improve the shelf life of bread, keeping it fresher for longer.

Deactivated malt flour is added in bolder quantities for flavour. It is usually 40% as sweet as sucrose meaning it is often used in conjunction with sugar in sweet bread types. Its flavour is often complemented with other sweet flavours, such as sugar, beer, seeds or rye. It’s popular in seeded loaves and shortly-fermented bread as it provides a warming, mature flavour. Too much can leave a slightly bitter taste.

When to use malt flour for baking bread

Non-diastatic malt can replace a portion of the wheat flour in a bread recipe. Diastatic malt flour has three core uses:

How much malt flour to use in bread dough

Based on the percentage of the total weight of the flour used:

Can I use too much diastatic malt flour?

When too much diastatic malt flour is used it creates an excessive amount of sugars. These retain water and inhibit the supply of water to the yeast through osmosis. This produces an excessively gummy bread crumb and slows down the rise of the bread.

Is malt flour suitable for every type of bread?

As amylase is provided by the yeast it’s not essential in every type of bread dough. In sourdough bread, lactic bacteria outnumber the yeast cells in the starter. This means that starch is slower to break down into sugars. A little malt flour will speed up the process of sourdough production. Many bakers find a longer bulk fermentation time is best as it produces more flavour and structural benefits. In this line of thought, the use of malt flour will decrease the quality of sourdough bread.

When making long-fermented bread, malt flour is a sensible solution if you are concerned about the rate of the rise. Having said this, I prefer to look at raising the proofing temperature or increasing the activity of the sourdough starter first. An exclusion to this rule is when using a preferment.

If preparing quickly made bread, malt flour can almost always be used to enhance aerobic respiration.

In all cases remember to be careful of that gummy crumb!

Malt flour is gaining popularity among health-conscious bakers. It is high in fibre and contains minerals such as; magnesium, potassium, zinc, thiamin, riboflavin, niacin, and a high quantity of vitamin B-12. Its sweet flavour works as a replacement for sugar in a recipe.

Malt flour can also be helpful for people with diabetes. It has a low glycemic index, meaning it doesn’t cause a spike in blood sugar levels. This makes it a good choice for people looking for healthy ways to control their diabetes.

Where can I buy malt flour?

How to store malt flour?

It is best to store malt flour in an airtight container to prevent stale. It can be kept for several months, but after that time has passed, its flavour will begin to diminish, and it should no longer be used.

Conclusion – Do I need malt flour in bread?

Malt flour is a crucial ingredient in malted bread, aside from this, it’s not always vital to include it. If you don’t have any on hand or don’t want to bother buying it, just use high-quality bread flour.