What Is The Role Of Soy Flour In Baking Bread? 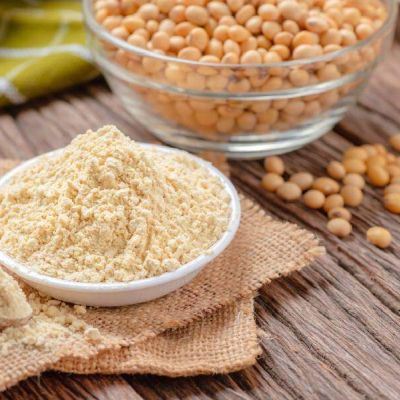 Soy flour isn’t a new thing in the baking industry. It’s widely used in many baked goods to not only boost nutritional value but also to improve texture, moisture, and shelf-life. Soy flour is very high in protein, so bakers use it alongside wheat flour to improve the quality of their bread. This article explains what soy flour is and how soy flavour improves bread dough.

What is soy flour?

Roasting soybeans make soy flour. They are then dehulled and ground into a fine powder. This flour adds high-quality protein because of its high lysine content. It also adds a slightly nutty flavour and is a natural dough enhancer. Two types of soy flour are available in the market: full-fat and defatted:

Defatted soy flour has had the oils removed during its production process.

How does soy flour improve bread?

The main function of using soy flour in bread dough is to increase its protein content. Soy flour is approximately 50% protein, much more than the wheat flour used to make bread. The protein content of bread flour varies from 9-14%. The inclusion of soy flour enhances the machinability of the dough and improves the texture of the bread. It also adds a slightly nutty flavour. Other benefits are:

Provides emulsification to the dough

Soy flour contains lecithin, which acts as an emulsifier. It thickens batters and dough to provide a stronger mixture.

The high quantity of soy proteins increases the amount of water that can be absorbed in a dough. This has some benefits for professional bakers, most notably cost control.

Exchange bread flour with half the amount of soy flour and keep the rest of the ingredients the same. As soy flour is cheap, its use lowers the production costs of bread.

The extra water that’s absorbed also delays the staling process. It does this by slowing the retrogradation of the starch.

Provides strength whilst lowering the gluten content of the bread

Unlike the proteins found in wheat flour, moist soy proteins do not turn into gluten. It means soy flour is gluten-free and often found in gluten-free bread mixes. Further processing is required to make soy flour gluten-free.

Its inclusion in bread dough not only increases the amount of protein but improves protein efficiency. An experiment called Enrichment of bread with soy flour, conducted by “E Yáñez, D Ballester, M Aguayo, H Wulf”, shows that the protein efficiency ratio of bread improved from 1.17 to 2.13 with the inclusion of 6% soy flour.

Increases browning on the crust

Due to the increased protein, the Malliard effect is more effective. This causes the bread to brown faster in the oven. Bread that contains soy flour can be baked in a cooler oven for a longer baking time.

Dough that includes 3-3.5% soy flour resists fat when fried. It’s a great inclusion for fried bread products such as doughnuts.

Lecithin, also found in egg yolks, creates foaming when heated. This offers a small increase in the dough’s rise as it traps more CO2.

Increases swelling of the bread

Soy flour does produce swelling once baked. When levels of over 4% are used, a negative effect is noticed. The use of sodium stearoyl-2-lactylate (SSL) can correct the shrinking somewhat. At the levels of 10 and above, SSL was not effective in preventing the decrease in size.

Adds oxygen to the dough

The enzyme lipoxygenase, which is present in soy flour, is a popular oxidizing agent used in bead manufacturing. It enhances the gluten structure to strengthen the dough whilst providing oxygen for the yeast respiration process. This benefits quickly-made bread, but lipoxygenase can also lead to over-oxygenation of the flour and bleaching of the xanthophyll pigments.

Overuse will lead to the bread collapsing, but in light use, the crumb will become whiter, and some of the “bready flavour” is lost.

Because of a combination of the effects described above, the dough becomes stronger and ferments faster. This means the dough does not need to be fermented as long as it would otherwise. It holds its shape when handled or passed through machines better and provides stronger layers when creating pastries such as croissants or Danish pastries.

How much soy flour should I use per loaf?

As you can see, soy flour does a little bit of emulsification, improves the bonds via its protein content, adds colour and helps to keep bread fresh. It isn’t an enzyme that improves one issue. Soy flour does multiple! But there is a limit to how much can be added. Soy flour shouldn’t replace all of the wheat flour in bread. Levels of over 8% can produce a stickiness in the dough that make handling difficult.

Recalling the tests conducted by E Yáñez, D Ballester, M Aguayo, H Wulf, they tested the effect of soy flour in dough in ranges of 2-15%. With higher inclusions, the bread deteriorated. It’s best to use less than 8% in bread dough.

Depending on what you are looking to achieve, 2-5% soy flour to the amount of wheat flour used is best.

Soy flour, especially soy flour that’s been lechithinated, is a cheap alternative to dairy products. It enhances the dough without the risk of lactose intolerance and milk allergy and also makes the product vegan-friendly. This ingredient contains calcium and vitamin A, essential for bone health and eye development.

Yet soy flour can only replace part of the properties of an egg. They are much more complicated than this. Therefore it should be used in conjunction with other enhancers.

Are soy flour and soy lecithin the same?

Even though soy flour and soy lecithin both come from soy, they have differences. First is the process of making it. As mentioned earlier, soy flour comes from finely grinding soybeans. At the same time, soy lecithin comes from making other soy-based products like oil, tofu, and milk. It is the waste product left during these processes.

Soy lecithin is a collection of several phospholipids that have both health and industrial uses. It’s usually used as an emulsifying agent or lubricant when added to food. It also contains antioxidants and other properties that protect flavour.

Despite being almost 50% protein, soy flour doesn’t produce gluten. So it’s great for gluten-free diets. Since it comes from plants, it’s also cholesterol-free and low in saturated fats. Besides that, it also contains a good balance of amino acids, which are important to maintain good overall health.

Listed in the table below are its nutrition details:

What can I use as a substitute for soy flour?

The only ‘problem’ with soy flour is that the trypsin inhibitor is not removed during its process. This is common with most legumes, and some people claim that it makes digestion harder. Besides, it’s still a great addition to a gluten-free, vegan, or low-carb diet. But if soy flour is hard to get in your area or you just want a different substitute, you might want to consider these:

Soy flour is naturally gluten-free. However, it can be grown in a crop rotation pattern with wheat crops which means there is potential for wheat to enter the production process. The same machinery used to cultivate wheat fields is also likely to be used to harvest the soybeans. Again, it is possible that wheat gluten could contaminate the soy, making it not totally gluten-free.

Is soy flour bad for you?

While many people believe that it carries potential health dangers, there’s no concrete evidence that can back this up yet. The tests that you might have heard of were made on animals who ate soy continuously for 5 years. Whether consuming small amounts produces health problems in humans is unknown but generally unexpected. In fact, it’s present in several products like margarine and ice cream. So you may be consuming soy without realizing it!

Where can I get soy flour?

Soy flour can be found in most grocery stores and health food shops. However, it’s always best to choose the freshest product available to ensure optimum quality. It’s also important to check the expiration date for guaranteed freshness. If you can’t find soy flour in your area, you can also buy it online. Big brands have their own websites or buy it from Amazon.

How to use soy flour in bread at home

If you wish to use soy flour at home to see if it enhances your bread, upon opening a pack or bag of soy flour, you may want to stir it. This is to give you a more accurate measurement if you are not using scales (not recommended!). The soy flour can be added to any bread recipe with the dry ingredients and kneaded. As soy flour absorbs a lot of water, you will need to increase the hydration of your recipe. For 1 part of soy flour, add 1½ of extra water to the dough recipe.

You might want to toast your soy flour before using it in your recipe. This enhances the nutty flavour profile further. You can do this by putting your flour in a dry pan over medium heat and stirring occasionally.

Both defatted and full-fat soy flour should be stored in the refrigerator or freezer.

Soy flour can improve the quality of commercially prepared bread. Using it with bread such as French, Italian, wheat, and other types, can enhance the texture and volume of the finished products

Is soy flour the same as soya flour?
Soy flour is flour made from soya beans so is often called soya flour. Strictly speaking, whole dry soya beans are ground and sifted to make soya flour. Whereas, soy flour contains more hull material and is more coarse.
Can soy flour make bread worse?
Soy flour improves dough handling and overall product quality. Bread dough fortified with soy flour will have increased water absorption, less mixing time, and decreased fermentation time. Too much soy flour makes a dough sludgy and the bread will taste nutty.
Can I use soy flour for french bread?
No. Soy flour is not one of the approved improvers that can be used in French bread. Yes, you could utilise it in a French bread recipe, but it won’t be an accurate representation of the bread.