The History Of The Croissant 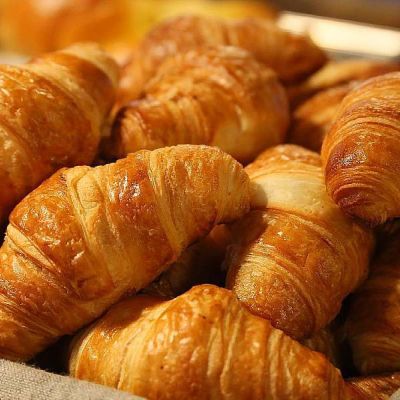 Few foods are as culturally iconic as the French croissant. This satisfying and crunchy breakfast food is stereotypically French. But do you know that the history of the croissant does not begin in France after all, and why was the croissant invented? Well, in this insightful guide, we’ll look at the history of this popular breakfast treat while uncovering where did croissants originate from. We’ll also help you find the best croissants in the world!

What is the history of the croissant?

What comes to mind when you think about a fresh, flaky croissant with its scattering crumbs and satisfying crunch?

Well, if you’ve been to Paris, then you’ll probably conjure up the image of a lazy morning drinking a steamy cup of coffee with a croissant!

Crispy on the outside, fluffy on the inside, and enjoyable on all sides! The croissant origin is connected to France, like a baguette.

But, who invented the croissant?

Most food historians trace the humble origins of the croissant to Austria, where a simple crescent-shaped pastry had been popular since the 13th century. Denser and sweeter than the modern croissant, it developed during the 17th century into kipferl (the German word for crescent). It would eventually morph into the croissant we know today.

Tracing the history of the croissant is full of twists and turns. With its roots in Austria, you’re probably wondering how it became a famous and beloved French pastry, so let’s continue!

Who made the first croissant?

What country does croissant come from? The true version of who first made the croissant is disputed, with many variations in existence. The most widely regarded story of the famous and beloved French bread dates back to the infamous Battle of Vienna in 1683.

The city of Vienna was under siege. For two months, thousands of Ottoman Turk soldiers surrounded Vienna. With defeat looming, supplies and morale were running low, and everybody in the city expected to surrender to the invaders!

But unknown to the Viennese, help would come from an unlikely source, a baker!

Legend has it that a baker working late at night just outside the city overheard the Ottomans’ new plan to break through Vienna’s protective walls. He immediately alerted the authorities.

From this tipoff, Vienna’s military defeated the Ottomans in the tunnels, killing several Turk soldiers and winning the battle in the process!

To commemorate this victory and the role that he had played, the baker created an exceptional pastry.

He came up with the idea of creating a crescent moon-shaped pastry that symbolized the Ottoman’s Islamic emblem.

The idea behind this shape was not just to remind the Austrians of their victory but meant to symbolically show that the Austrians had devoured the Ottomans.

Named the kipferl, the Austrian German word for crescent, this pastry became so famous in Austria that everyone wanted to be associated with it.

Is a croissant really French?

The kipferl is the ancestor of the modern-day croissant, so to answer the question of “where did croissants originate?” The answer is that croissants origin outside of France. They were from Austria.

But how did this famous pastry find its way into France, and how did it become so popular in its new home? Well, it’s essential to look at Marie Antoinette’s role in bringing kipferl to France.

Austrian, Marie Antoinette became the Queen of France when her husband ascended the throne just before the French Revolution. She was born in Austria in 1755 when kipferl was a famous breakfast pastry in Austria.

Antoinette had been sent to France at the tender age of 14 to marry the future King, King Louis XVI.

As would happen to kids her age, she became lonely and dearly missed her homeland. She also missed her favourite pastry, the kipferl, so she asked court bakers to make her some.

Together with other pastries from her homeland, Antoinette introduced the kipferl in France. These pastries were collectively referred to as viennoiserie, in reference to her home city of Vienna.

Moving from kipferl to croissant

By the 19th century, the kipferl was a popular pastry in France. This was long after Queen Antoinette had introduced this famous Austrian pastry to France. It was, however, a far cry from the flaky and crunchy pastry we know today!

Although the Austrian version had the crescent shape of today’s croissant, it was made of heavy dough, similar to brioche.

The bakery served Viennese specialities, including the kipferl. The recipes were developed with the use of one of the first steam ovens in France. After a few years, August Zangs’ kipferl became so popular that its name was translated to the French word for crescent, croissant.

By the end of the 19th century, French bakers made their croissant dough lighter, making the texture more delicate and aerated like it is today. At some point, croissants were brushed with egg wash before baking to add a crispy sheen to the outer crust.

Croissants would be made in bakeries across the world, eventually becoming the vital pastry and symbol of French culture they are today.

Croissants have always been crescent-shaped, but there are also straight croissants.

There is an important difference between the two shapes, especially if you’re travelling to France.

Crescent-shaped croissants are made with margarine or a butter/margarine mix. Straight croissants must be all butter. Salted butter can be used, but most bakers prefer unsalted butter.

The irony is that traditional croissants would have been crescent-shaped and all butter. Nonetheless, it’s easy to taste the difference immediately!

Why is the croissant so popular?

Few foods have their own day of celebration. The fact that there’s Croissant Day on January 30th is a testament enough that this light, fluffy, flaky, and undoubtedly delicious pastry is so popular.

But what exactly makes the croissant one of the most famous pastries in the world? Let’s look at some characteristics that make croissants so popular.

A perfect croissant is characterised by its indulgent mouthfeel of butter and gold colour. It has to be very soft on the inside and crispy on the outside. When you bite the croissant, you should see a puffy pastry and scattering crumbs that offer a very satisfying crunch.

So, what does the croissant symbolize? One of the main reasons why the croissant is popular the world over is because of their versatility.

You can either eat a croissant alone or stuff it with other accompaniments. I recommend you try both versions but start with the croissant in its very traditional form before experimenting.

Some of the most savoury fillings include ham, cheese, bacon, raw ham, eggs, bechamel sauce, spinach, parmesan cheese, and many more. If you love sweet fillings, you can also try fillings such as caramel milk, jam, fruits, and chocolate. In essence, the croissant is so versatile that it can be used as sandwich bread.

It perfectly blends sweet and savoury

The main ingredients of the croissant are flour, yeast, sugar, butter, and salt. This is a high-calorie food that tastes like butter with a touch of sweetness. In other words, the croissant brings to your table a perfect blend of sweet and savoury!

Although it’s a popular pastry for breakfast, you can eat it at any time of the day.

Another reason why the croissant is popular is that it’s light and pairs with drinks well, including tea, juice, or coffee. Its size also makes it easy to manipulate and digest. It’s also not sticky so you can eat it with your hands.

How hard is it to make a croissant?

A technique called “lamination” involves rolling the dough out and placing a layer of butter (or margarine) on top. The dough is then folded over the butter to enclose it like a parcel. To generate the layers of flaky pastry, the dough undergoes a series of folds, rolling the dough out to a thickness of around 12mm before each fold is commenced.

Care must be taken to ensure the temperature of the butter is cool enough to not melt into the dough but not so cold that it shatters when folded.

Once rested, the dough is placed on a lightly floured surface and rolled out again to a thickness of around 9mm for croissant triangles to be cut, which are then rolled into the authentic croissant shape and placed on baking sheets lined with baking paper, ready for proofing.

Once proofed, the croissants are coated with egg wash and baked for around 20 minutes with some steam added to the oven.

Croissants are not the healthiest of food items! They are high-calorie, high-fat food which should be eaten in moderation. A typical croissant contains around 406 calories and 21 grams of fat but varies based on size and butter content.

Where can I find the best croissant in the world?

Although France is the traditional home of the authentic french croissant recipe. You do not have to go to France to enjoy perfectly-made croissants. This pastry is renowned all over the world and can be enjoyed almost anywhere.

But where can you find the best croissants in the world? Well, let’s list these places.

To this end, there’s no doubt that the croissant is among the most celebrated pastry in the world. Its layers of flaxy textures, butter-coated dough, and lightness make it one of the most delicious snacks or breakfast items. The pastry has a rich history dating back centuries in Austria but has become a symbol of rich French cuisine and culture in modern times.