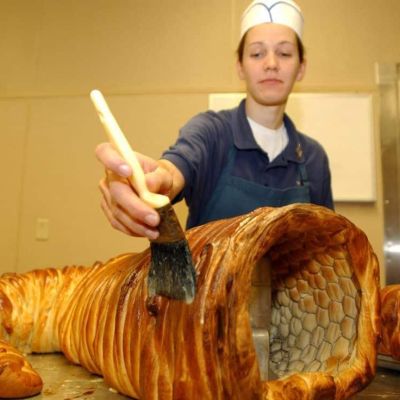 The word “pastry” is very liberally used in English. But in France and Belgium, pâtisserie is a baked product made from flour and fat. A pâtisserie is also the name of the place or “pastry shop” where these products are made or sold.

Fats such as eggs, butter, milk, and cream are used. Pâtisserie products can be sweet or savoury, with quality pastry being traditionally light and delicate. Eggs and baking powder provide aeration instead of yeast.

The finished products are not only expected to taste delicious but look exciting as well.

Since pâtisserie is complex, it is executed by a well-trained pâtissier (master pastry chef), competent in several classical techniques. Modern pâtisserie uses a combination of techniques and flavours to produce innovative foods.

Here are some iconic delicacies:

This dessert is made in the shape of a wheel and filled with praline cream. It was created in 1910 to commemorate a bike race from Paris to Brest and back.

Several profiteroles (choux pastry filled with pastry cream) are positioned on a cone-shaped stand with a caramel thread, often decorated with honeyed almonds or chocolate. Croquembouche is traditionally served during French national holidays and is very hard to master!!

A dessert consisting of layers of cream and puff pastry. Usually topped with sprinkled sugar and combed icing.

A savoury pastry tart filled with egg custard and lightly baked until golden. Popular variations include Lorraine, broccoli and salmon and vegetables.

Despite its popularity in France, viennoiserie has its origins in Vienna. Viennese immigrant bakers introduced baked products such as the Kirpfel to Paris.

Austrian military official August Zang is regarded as the key pioneer in developing and popularising viennoiserie. His bakery, Boulangerie Viennoise, had the first steam oven in Paris, and his range of Viennese bread (and steam ovens) quickly became adopted throughout the country and later the world.

Viennoiserie is a collection of enriched flour-based products, risen with an active levain such as yeast or sourdough. They are always completed by baking in an oven (usually a steam oven).

Aside from flour and yeast, viennoiserie recipes frequently contain sugar, eggs and butter. However, these products are only slightly sweet. They are not eaten as a dessert but for breakfast or paired with coffee at any time of the day.

When baking viennoiseries such as croissants and pain au chocolate, butter is folded into the dough, which forms layers of perfectly flaky pastry. The lamination technique is similar to an enriched puff pastry created by pastry chefs.

Viennoiserie are not generally iced, although they may be filled with frangipane, chocolate, fruit and other pastes.

The French croissant has its origins in Vienna! The layers in croissants are created by rolling out the dough, laying a slab of butter into it and repeatedly rolling and folding it to produce layers of butter and dough.

Another famous French food! Brioche is similar to typical french bread, so expect to find it in boulangeries as well as viennoiseries. Brioche is made from a yeast-leavened dough that’s enriched with high quantities of eggs and butter. They have a rich, slightly sweet flavour and can be served with coffee or spread with jam for breakfast.

Translating as a pig or elephant’s ear, palmiers are deliciously simple French pastries that are perfect with a café au lait! Similar to croissants in that Palmiers are a laminated pastry dough, just baked until harder and more biscuit-like.

I fell in love with Vienna bread on my last trip to France.

By using steam in the oven, a unique glaze is created on the crust of the sweet bread, which makes Vienna bread so characteristic.

Vienna bread is great for sandwiches or enriched with chocolate chips.

What is a Boulangerie?

A French bakery business can only call itself a boulangerie in France only if it bakes bread on the site. Expect to find sweet and savoury bread that can be torn apart and eaten on the go, or sliced and made into sandwiches.

French boulangers have to be highly skilled in temperature control, dough handling skills and oven management in order to make quality products.

Products found in a french boulangerie

The iconic baguette is the most popular bread in the world, but do you know how they taste in Paris? This baguette is pivotal to French culture because of its crisp crust and soft interior.

There is a discussion to be had about whether doughnuts (or, as the french call them, Beignets) are bread or french pastries. As they are made from a sweetened bread dough similar to brioche, there is an argument to say they are actually viennoiserie! Either way, delicious sweet dough that’s risen with yeast and fried in oil. Topped and filled with a whole variety of things!

Sourdough bread is made from a cultured starter of wild yeasts and bacteria. It’s the oldest way to make bread and pain au levain has been popular throughout French bread history.

A traditional French bread made with a combination of wholegrain, white and rye flours. Delicious bread with many uses.

Boulangeries produce bread that’s risen with yeast or sourdough (a cultured yeast starter). Pâtisseries make elaborate cakes and gateaux without yeast. Instead, aeration is provided by eggs or baking powder. They need time, precision and balancing flavours, a different approach to bread.

Pâtisserieand viennoiserie products are sweet French bakery products found in France that contain lots of sugar and fat. The biggest difference between viennoiserie and pâtisserie is that pâtisserie does not use yeast. After baking, tarts and gateaux are decorated and filled by master pastry chefs, whereas, with viennoiserie, baking is the final stage.

A boulangerie is where bread is baked and sold. Viennoiserie is fattier and sweeter than bread made in a boulangerie but less indulgent and flamboyant than pâtisserie. Both styles of bread products use yeast or sourdough.

What is the difference between pâtisserie, boulangerie and viennoiserie?

It’s common for boulangeries to sell a range of pâtisserie and viennoiserie alongside bread. Different skills are required to make each type of product. In France, many of these bakery businesses are extremely popular, employing several staff members.

Viennoiserie and french pastries will be prepared in the afternoon once the oven has cooled down and the kitchen cooler. Viennoiserie can then be left to rise overnight and baked either before or after the bread, as they require a cooler baking temperature.

The skills required to produce pâtisserie are extremely complex, so a skilled pâtissier is required to make enticing products. That said, developing flavour in bread and viennoiserie so that products don’t just look delicious but taste amazing is an underestimated skill. A French baker is trained to an incredibly high standard. You can’t go to France and not try French baked goods!

Further reading: What’s the difference between Italian and French bread?