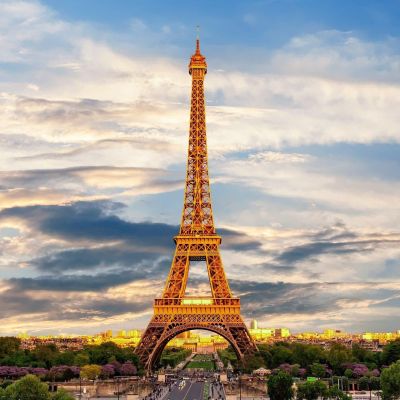 I’d never thought to ask myself these questions before!

But, being the determined person I am, I couldn’t resist delving into the topic deeper to discover the answer!! It turned out that I did know the answer to why French bread tastes so good after all, but it’s not just one thing…

Where many other countries utilise similar baking styles and flavours, French bread utilises a diverse number of techniques. These are combined to produce some of the world’s best bread. French bread history is taken more seriously in France than in any (arguably) other nation.

An authentic baguette is super crispy and tastes like sweetened butter. It has a lingering hearty flavour that enhances any sandwich filling. But a baguette is just as enjoyable being eaten on its own, ripped apart in chunks.

Why does french bread taste so good?

Let’s look at each in detail:

French bread is always made with French flour, which provides a lot of the uniqueness of French bread. It’s packed full of deep aromas, contributing significantly to why French bread tastes so good.

The French flour grading system uses ash content. This is the weight of the remnants after burning 100 grams of raw flour. French bakers typically use t0.55 or t0.65 flour to make white bread. Their flour is more coarse than in other countries. Therefore, more bran is included, which means that French white flour has a creamy colour and deep intense aromas in its raw state.

French flour has the aroma of the french countryside. Grapes in a vineyard absorb the flavour of its Terrior (environment), and I believe that wheat does the same. It’s genuinely fantastic. When baking with French flour, I naturally want to enhance the flour’s raw flavour and make some beautiful bread.

French bread flour is not as high in protein as the flour grown in Italy, Canada and even the US. It is typically around 11-12.5% protein which is acceptable for most bread styles. High protein flour is necessary for making modern, quick-bread following the Chorleywood method

As French bread flour isn’t (quite) strong enough for making bread with a single rise, bread recipes undergo a fermentation period or the addition of mature dough.

French flour generally makes dough that is more extensible and less elastic than other flour types. This makes it less suitable for high-hydration dough as it struggles to retain its shape in a weaker structure.

The attitude of a french baker is to “make it the right way”. They tend to aim for perfectly hydrated dough without fancy tricks.

The baguette traditionally followed a ratio of; 100% flour, 60% water, 2% salt and 2% yeast. Boulanger’s today craft their recipes outside of these conditions, but there are many regulations they need to follow. The strict restrictions include adding only certain ingredients and very few dough improvers. The ingredients have to be natural and necessary.

These rules prevent the use of unnecessary ingredients in bread. For example, you cannot add butter to a baguette recipe and call it a baguette.

Sweetened or enriched bread will include traditional fats and sweeteners such as butter, sugar or honey. Traditional bakers won’t spray their tins with oil or dust their banneton (proofing basket) with semolina. They use butter as grease in their bread tins and exclusively flour to dust their proofing baskets.

Semolina and oil are not permitted. These practices are not as strictly followed as decades ago, but some bakers remain faithful.

French bakers don’t get excited about doughs with high water content as many do in the US. This could stem from not using oil in their dough which helps it stretch without tearing.

It could also be because they struggle to proof sticky dough in bannetons as they will only line them with flour.

It could also be because their ancestors made pretty good bread without high hydration, so why change anything?

– How bread is eaten in France

I discovered a new bread-eating experience on my last visit to France. And it was awesome! Thick slices of a saucisson sec laid flat, covering the plate from top to bottom, some pickled gherkins, about five salad leaves and a drizzle of this banging, thick salad dressing.

And it came served with a simple baguette, cut into slices. It was simple yet, inspiring and truly unforgettable. In terms of texture, it wasn’t something I would pair together. Most of the ingredients were hard and crunchy. But the hardness made the flavours sing out, and different acidic combinations provided contrast. A pure delight and proof that adding bread to a meal can enhance it provided the right one is chosen!

Lunchtime: Sandwiches or burgers made from baguettes, buns or pain rustique.

Dinner: Pretty much any bread as a starter or accompaniment to a meal.

With coffee: Sweet bread types are eaten as dessert or snacks throughout the day.

The government did two significant things that influenced the quality of bread. The first fundamental decree ensured that bread was sold at one price throughout the country. It aimed to help the poor, who at the time were malnourished and starving, to access quality bread.

Bakeries soon realised that the local bakeries that made the best bread had queues out of the door. This (in my opinion) forced bakers to strive to make the best bread in town just to survive in business. The law has now been removed. However, it leaves a legacy that strives for quality.

The second key aspect is protected bread quality. The French government passed another bread law in 1993. Like how regional recipes and the grapes used regulate wine, bread has set criteria to follow to be awarded the correct title. This has meant that bread quality across France has improved.

Bakeries can use frozen dough, bake off-site and include enzymes in their recipes. However, they are not allowed to be classified as specialist boulangeries.

These rules force French bakers to maintain the quality of the nation’s favourite product. Cutting corners will be noticed!

By buying French bread, you are buying into the beliefs of French people not to meddle with natural glory. French bread flavour comes from the ingredients, the food it’s paired with, the baker’s attitude, and the country’s laws. These combine to create bread that is so popular across the world.

The climate in France is cooler than its southern neighbour, Italy. This creates an entirely different flavour in the wheat used to make bread. Wheat takes longer to grow in cooler regions, which allows it to develop more flavour. Italian flour is milled finer than other flour. This, combined with Italian-grown wheat’s natural characteristics, produces bread with a thin crust.

Because of the ingredients around them, bakers make bread that goes well with their food. Breads like ​Pain de Campagne or levain de rustic go perfectly with a soupe aux légumes or cheese.

Whereas Italian bread types tend to be lighter in flavour. Classics such as pizza or focaccia go well with a topping. Pane cassericio and stifilato are great with cured meats or pasta. Generally, Italian bread enhances the food it accompanies, acting as a carrier of the dish’s flavour. French bread alters the meal’s flavour, playing an integral part in the dish’s balance.

So, what makes French bread taste so good?

How it’s made, the ingredients it uses and how it’s eaten are the key reasons that French bread is so special. Every time I’ve had the pleasure of eating traditional French bread, it’s been an experience I wish to remember. Even my 9-year-old son, who only likes simple light-tasting food, loves the flavour punch of this nation’s bread.

Some stretch from bread laws imposed to retain the quality of the internationally recognised product. Some point to the quality of flour grown in the country’s climate.

An arrogance to ignore flours from other countries (and quite rightly so).

Or is it the dough-handling techniques passed through generations of bakers in boulangeries?

There is much competition for selling a baguette, croissant or a Pain de Mie, in French cities. Independent boulangeries must set themselves above the competition by serving the best quality bread.

There is little desire for the poor-quality bread that’s found in many countries. The French want to enjoy food.

Ending thoughts on the taste of French bread

Many reasons combine to produce many of the most recognised bread in the world. By eating French bread, you are buying into the beliefs of French people not to meddle with natural glory. It’s not just food. It represents that French people can make beautiful products and eat them at whatever time of day they fancy. There’s arrogance about it, but I love it!