How To Use Vinegar For Baking Bread And Cakes? 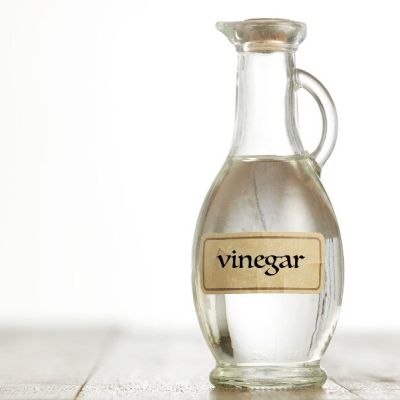 Vinegar is most commonly known for its use in cooking and cleaning. But did you know it’s also a great ingredient for baking? Let’s talk about it so you can learn how to use vinegar for baking bread or cakes for your next bake!

Vinegar can be a surprising addition to the arsenal of baking ingredients. But it is often found in baked goods because it reacts with baking soda. This creates carbon dioxide bubbles while cooking and it helps the batter rise in the oven.

What is the use of vinegar in baking?

Vinegar is a mild acid that helps break down the starches and proteins in your bread. It changes the pH levels of the batter. Adding it to your bread dough can help with good rise, moist crumb, airy texture, and also enhances the flavour.

How vinegar improves the rise of bread

Vinegar dissolves the chemical connections that hold protein threads together in a twisted state. This causes the gluten to denature or unravel and “tenderise.” With repeated exposure, the unravelled gluten eventually collides to create new bonds. These linkages coagulate the proteins gradually, re-forming them into a more solid structure.

The air pockets created by gluten will burst if the dough isn’t mixed and risen correctly. Adding vinegar strengthens the gluten structure. This is especially helpful for short-kneaded and quickly-risen bread. It also provides a better environment for yeast fermentation which will accelerate the rising time.

How vinegar changes the bread’s crumb

Adding vinegar reduces the oxidation of the flour. This will make the bread taste bitter and less extensible. Including vinegar in bread will improve the texture and feel of the crumb by enhancing the crumb structure.

How vinegar improves the flavour of bread

Vinegar is made from acetic acid. This is an organic acid that appears naturally during yeast fermentation as part of the dough fermentation process. When bread is made quickly, a little bit of vinegar enhances the properties of the dough as if it had been made in a slow, more artisanal method. This makes bread taste more aromatic and lowers the pH value of the dough.

A dough with added vinegar will have a better shelf life. This is mainly to do with the lowering of the pH value of the bread. This environment is harder for bacteria to bread. Therefore, reducing the likelihood of mould developing.

Should I add vinegar to bread?

Vinegar is a great ingredient for those who wish to make their own dough or bread. A lot of vinegar kills the yeast when they are mixed together. It’s important not to leave them in contact for too long, but small amounts can be added without fear.

Will bread taste sour if I add vinegar?

Only if you add too much! But a single tablespoon of vinegar has a mild taste and won’t sour the dough. In contrast, it can help create a more flavourful dough as it slows down the yeast in its process. It also lengthens the lifespan of baked goods.

What do baking soda and vinegar do in baking?

Adding vinegar with baking soda is ideal for many types of cakes. They create a chemical reaction that releases carbon dioxide. This makes the baked products rise in the oven and results in a fluffy, moist texture.

What vinegar is good for baking?

The most common type of vinegar for baking is plain white vinegar. It has a mild, uncomplicated flavour. Another one is cider vinegar, which is made from fermenting apples. This has a slightly sweeter flavour than white vinegar. But neither type leaves an aftertaste behind when you use it in baked goods when used sparingly.

Is it necessary to add vinegar to cake?

Yes! With all the benefits that it can do to cakes, it should be necessary. Always consider that adding vinegar to cakes can result in your cake being great! A dash of vinegar will make your cake moister while baking. Not to mention that adding acidic ingredients will cut through the sweetness.

What can I use if I don’t have vinegar?

Although it’s usually used for cooking, lemon juice can be substituted in baking. If your recipe calls for 1/4 cup of white vinegar, you can use a 1/3 cup of freshly squeezed lemon juice. This ratio can retain your desired consistency, but it will alter the flavour a little bit.

Can I skip adding vinegar to a cake recipe?

Skipping vinegar from your recipe might not be that good of an idea. While yes, the flavour profile of your cake will surely be the same even if you skipped it. But the texture, lightness, and tenderness of your cake will not be present. So it’s really best to use it if the recipe says so.

How much vinegar do I substitute for an egg?

Vinegar is a natural way to bake your cake if you don’t want to use eggs. It works well as an egg substitute in cake, cupcake, and muffin recipes. Although it doesn’t contain protein or fat it will still improve the structure and rise as an egg would. Mix 1 teaspoon of baking soda along with 1 tablespoon of vinegar to replace 1 whole egg. If your recipe calls for two or more eggs, just adjust the amount of baking soda and vinegar with the same ratio.