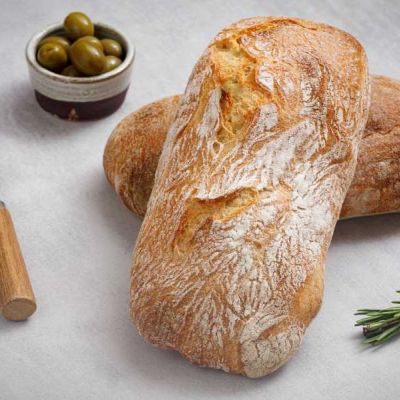 When it comes to bread, you have a lot of tasty options. Most are made with the same ingredients – flour, water, yeast, and salt. Combining these few ingredients turns into wonderful loaves of warm goodness. Who doesn’t love warm bread? Ciabatta and sourdough are two popular bread choices for bread baking and bread eating! However, do you know the difference between ciabatta bread and sourdough bread?

Besides the obvious (Ciabatta is an Italian bread), one difference between ciabatta and sourdough is the leavening agent. Ciabatta uses a commercial leavening agent such as dry, instant, or fresh yeast, while sourdough does not. It uses a natural culture of wild yeasts and acid to raise the bread.

Another distinction is the level of hydration in each bread. Ciabatta uses more hydration than traditional sourdough which affects how these loaves of bread bake, taste, and their nutrition.

How the leavening agent differs between ciabatta and sourdough

Leavening agents are substances that cause an expansion in doughs and batters by producing gas. One of the differences between ciabatta and sourdough is the leavening agent used in the baking process. Both of these types of bread can be made using prefermented dough, meaning you allow a portion of the water and flour mixture to ferment before you add it to the remainder of those ingredients.

Ciabatta uses a yeasted pre-fermented leavening agent, however, you don’t let the ciabatta starter ferment for nearly as long. The flavour it provides is not nearly as strong as it is in sourdough. This yeast is a mixture of water, flour, and commercial yeast. It’s left to mature between 4 and 24 hours before mixing it into your final dough. Before mixing, you will need to add a second commercial yeast alongside the remaining flour, water, salt and any other ingredients such as extra virgin olive oil.

On the other hand, sourdough uses a sourdough starter, which is a slow-fermented, live yeast starter. This process is time-consuming, so it will take time and patience. Expect 2 weeks of regular attention to build a sourdough starter that’s active enough to proof bread. However, once you have a thriving starter going, you can use it to bake loaf after loaf of bread. And even share it with others!

The different tastes of ciabatta and sourdough

There is also a difference between ciabatta and sourdough when it comes to taste. Sourdough is known for its signature tangy flavour. So, of course, it is popular for sandwich making. However, it is delicious to eat simply warmed up and topped with a bit of butter or olive oil. You should also try it for making stuffing or as a topper for French onion soup. The flavour of sourdough bread varies from town to town, soaking up the local environment’s climate and wild yeasts to produce a unique product.

Ciabatta, on the other hand, has a lighter, crustier texture than sourdough. You will also find it to have a much milder flavour. It will get some flavour from the olive oil used in making it, but it will be mild. The texture is perfect for holding up to any sandwich ingredient.

Its relatively neutral, light flavour is excellent to pair with strong or light accompaniments. Try your fresh-baked loaf of ciabatta by dipping pieces of it into herbs topped with an excellent extra virgin olive oil. Talk about a quick, tasty treat. -Yum!

Another difference between ciabatta and sourdough is the baking process – fermentation time, mixing, shaping, etc. It’s easier to describe the basic method of each than a comparison, as they have many similarities and differences:

Generally, ciabatta has a higher level of hydration than sourdough. It’s a high-hydration dough, meaning it is wetter and stickier. It requires a longer mixing time, and you will need additional folds to build adequate dough strength to keep it from flattening out. This develops a robust gluten structure capable of supporting gas and plenty of water as it rises.

Due to its higher hydration levels, ciabatta is not shaped or scored before baking. Instead, just divide it, dust it with flour to prevent sticking, and leave it to final proof in a flour-dusted couche. Once your dough has finished proofing, you’ll put it in the oven for baking using a baguette peel. See my ciabatta recipe to try it out yourself!

Since sourdough typically has a lower hydration level, it does not require as much mixing time as the ciabatta. The longer fermentation time requires a gentle mix to avoid over-oxidation.

Once your sourdough has finished fermenting, you will divide it and shape it. Then you will leave it to proof, usually in a banneton proofing basket. Once risen it’s scored before it goes in the oven to bake.

How about sourdough ciabatta bread?

Even though ciabatta and sourdough are different, you can combine them to make truly fantastic bread. Talk about combining the best of two good baking styles! You will replace the yeasted pre-ferment with the sourdough starter. So, no commercial yeast in this loaf. This bread will have the same crumb structure found in regular ciabatta combined with the acidity you find in a loaf of sourdough bread. A true gem if you can find it or master making it yourself!