Can I Open The Oven Door When Baking Bread? 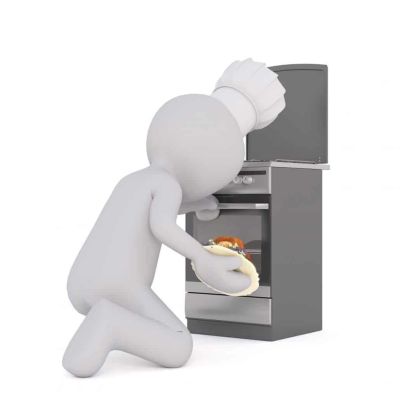 Opening the oven door before the crust hardens can make the bread collapse. You can open the door during the first 2 minutes of baking. This window is often used to spray water to create steam. After this, the oven should be kept closed for the next 15-20 minutes, or a few minutes after the bread has finished rising.

There are exceptions, which I’ll cover in a moment. But first, let’s understand why opening the oven door can be such a problem with bread.

What happens if you open the oven while baking?

As an oven heats up, air pressure increases. If the door of the oven is opened, the pressure is released, alongside moisture and warmth. Heat loss can be offset somewhat by using a baking stone, or even a pair of stones, one above and the other below the bread.

Why should you not open the oven door when baking

If pressure is released when the outer perimeter of the dough is still tender, the sudden change shocks the dough, and it collapses. The door can be opened once the oven spring has ended and the crust is formed.

Opening the door lets heat exit the oven, which means bread will take longer to bake. Long baking times at cool temperatures are a common cause of dry bread, rock-hard crusts and bread that’s quick to turn stale.

What happens when bread is baked in the oven

To end the rise of bread in the oven, two things need to happen; the crust must set, and the yeast gets so hot it becomes inactive. These two things preferably occur at roughly the same time:

This is the point where moisture in the oven evaporates and no longer insulates the outer perimeter of the bread from the heat. After this, the crust dries out to form the crust.

Is it ok to open the oven to add steam?

If you want to open the door during the first 2 minutes of baking to add steam for a crispy crust, you can. A method introduced by Peter Reinhart in his classic book The Bread Bakers Apprentice adds steam to a home oven using 3, 3-second sprays with a water mister, at 30-second intervals. The creation of steam in the oven delays the crust set point, so the bread rises further. It is also the key to making crusty bread.

As the door was recently opened to load the bread, the air pressure is still low. Opening the door in the first 2-3 minutes, before the crust structure has formed won’t noticeably affect the bread in any way.

Can I open the door after the crust has set?

Allowing steam to escape is a vital step in baking bread. When steam is removed, the heat becomes more intense (water is an insulator). This, combined with moisture having an escape route out of the bread leads to the crust hardening. After the crust has set in a crusty loaf, bakery ovens release the steam from the oven, which allows the crust to harden and later turn crispy.

When to open the oven door for soft bread?

Soft bread must be baked quickly. This means that the crust sets quickly, which reduces the baking time. The key characteristics are that more moisture is retained in the bread, and the crust is thicker. A thick crust makes it hard for moisture to escape the bread. When baking soft bread, moisture in the only should be released from the start of the bake if possible. Most domestic ovens aren’t all that well-sealed so there is no action to take.

How a damper works in a bread oven

In a professional bread oven, there is a lever that opens a hole in the rear of the oven called the “damper”. When open, it allows steam to escape thus, reducing air pressure.

How to recreate a damper in a home oven

Recreating a damper on a domestic oven is not an exact science. It is a relatively small hole in comparison to the size of a bread oven. Without drilling a hole yourself, the best trick is to open the door every 2-4 minutes. You’ll only need to open it a little, but it can work wonders on the quality of the bread.

Many of you are already taking advantage of this method when baking with a Dutch Oven. Removing the lid halfway through the bake allows the steam to escape and the crust to harden. But why not periodically open the oven door as well to further help the crust to harden? See the Dutch oven I recommend.

When to open the oven door when baking bread

But, there’s one flaw with this article!

Home ovens are not as well sealed as commercial bread ovens. This allows the steam to be released without opening the door. So whilst the baking techniques discussed in this article are followed by professionals and those with micro-bakery ovens, the impact of releasing the door later on in the bake won’t be as noticeable to many home bakers.

Many bakers disappointed with the crispiness of the crust get around this by using a tray full of boiling water to create steam. If you use this technique, remove the tray when it is time to open the door to release steam.

Opening the oven door, before the crust has set is never a good idea. But it is necessary to open the door to release steam later on in the baking process. So don’t open the oven door – unless it’s the right time! If you want to see how I set up my oven to make bread, try my best bread oven setup for sourdough baking post. I also have another article that explains the optimum temperature for baking bread. I hope you’ve found this helpful, if you have any questions, drop a comment below!

Can you bake with the oven light on?
If you don’t need the light on to check your bread, turning it off can save energy and lower costs. It doesn’t affect the quality of the bread.
How fast does the oven lose heat when the door is open?
Opening the oven door allows heat to escape, and depending on how powerful the elements are in the oven it will take time for the temperature to recover. When the oven door is open for 20 seconds, cooking time increases by 2 to 5 minutes.
Where should the rack be in the oven when baking bread?
Ovens conduct heat in varying ways. It’s best to start placing the rack in the middle of the oven to start with. If you notice the base of your loaf is underdone or the top is burning, lower the rack. If the opposite occurs, lift the rack up.
How to check on bread as it bakes?
The best way to check how well your bread is baking is to look through the glass. But if your oven doesn’t have a glass door, or you bake in a Dutch oven, wait 20 minutes before opening the door, so you don’t release pressure.