How Much Weight Does Bread Lose When Baked? 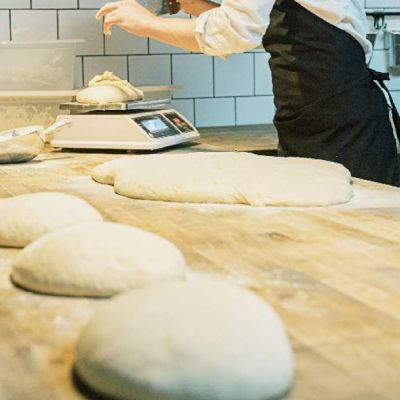 Are you wondering why your baked bread weighs less than when it was raw dough? Well, dough loses moisture throughout the bread-production process, making bread weigh less than the weight of the raw ingredients. Not being aware of this issue if you scale up or write recipes can lead to big problems! You’ll either have smaller bread or run out of dough to finish a batch. To learn more about the impact of bread weight loss, this article will help you out!

Bread loses 10-25% of its original dough weight through the production process. The majority of the weight is lost through moisture loss during proofing, baking and as the bread cools. Home bakers and small bread producers should expect a weight loss of about 15-20%. While large-scale baking plants can use special cooling units to reduce weight loss to around 12-13%.

The amount of weight a particular bread loses is impacted by the shape of the bread, the amount of water in the dough, the length of fermentation and the type of flour used.

Why does bread lose weight in the oven?

A bread dough contains water but water is also found in other liquids such as milk, butter and (even) flour. While bread is in the oven it releases moisture. So as the water evaporates, the weight of the bread decreases.

How much weight can be lost when baking?

Whilst in the oven, bread doesn’t actually lose much weight. Instead, the majority of the weight loss occurs during the proofing and cooling periods. During baking, bread loses 2-4% of its original dough weight.

How does bread lose weight outside of the oven?

During proofing and cooling, the weight loss of the bread averages at 8-16%, depending on the type of bread being made. As the dough rises, moisture escapes and again, as the bread cools it releases more moisture at a faster rate. Also, the dough will stick to the mixer or work surfaces, which further lowers the final weight of the bread.

How much weight does bread lose when it cools?

As the bread cools, water exits the core of the bread and escapes through its outer perimeter. Some of the water will be retained in the crust, yet a lot evaporates as steam. From exiting the oven, until it cools to room temperature, the bread will lose 2-4% of its weight. Moisture loss continues as the bread stales, with day-old bread weighing 3-5% less than it did the previous day.

How much does bread weigh when cool?

Bakeries can choose to weigh their bread hot, or when fully cooled. In fresh bakeries, the bread will be weighed hot so the product is as fresh as possible when it goes on sale. In this instance, most bakeries aim for their bread to weigh higher than the target weight. An 800-gram loaf should weigh at least 840 grams hot, and a 400-gram loaf would have to be 430 grams. They will weigh around 820 grams and 410 grams when fully cool.

When weighing cold, many commercial bakeries will aim for their bread to weigh under the sold weight! Each country has minimum thresholds for underweight products and also weights and measures legislation. Many will accept an average weight from each batch, others require every loaf to be weighed.

Not leaving much of a buffer room between the legal weight limit and the target dough weight will provide a higher yield and therefore profit. This is risky as if a batch of bread is produced lower than the legal limit it will have to be disposed of or sold for less.

After the bread is baked it will shrink by around 5-10%. This is partly due to moisture loss and also because of a loss of air pressure. As the bread rises in the oven, air pressure is high due to carbon dioxide production. As the bread cools, the CO2 which previously stretched the pockets of gluten (to raise the bread) is lost and the gluten structure contracts.

Does bread shrink when you bake it?

An immediate shrinkage after baking is a good sign for bread. It indicates that enough moisture is driven out from the dough. While baking in the oven, the bread shouldn’t shrink. When the yeast in the dough is heated up, it will become more active and makes the bread rise and expand (see oven spring). If your bread shrinks while baking in the oven, it means that there is an issue with your dough.

Which types of bread doughs lose the most weight?

Types of bread that have higher hydration levels will tend to lose more weight simply because they have more amount of water to lose. This, however, is on the proviso that the bread is sufficiently baked in the oven. Whole wheat flour and other whole grains will lose another 2-3% more than bread made with white flour. Bread that is under proofed when baked will weigh more than otherwise. Overproofed bread is much lighter.

How do bakers compute a bread formula?

Bakers write their bread formula with the use of the baker’s percentage or baker’s math. This is done so that they can quickly tell how much of each ingredient is needed. The total amount of flour in the bread recipe will be represented as 100%, and it will be the basis of the percentage of the other ingredients.

The formula to get the baker’s percentage would be the weight of each ingredient divided by the weight of the flour and then multiplied by 100. To give you a run down, here are some examples for a couple of types of bread:

Most dry doughs like bagels and pretzels have about 50-57% of hydration levels. These doughs are some of the least hydrated doughs, which is why they’re also extremely stiff.

While the standard types of bread that have denser and closed crumbs contain moderate hydration levels or around 58-65% hydration. Bread rolls, pizza, sandwich loaves, French and other European bread types are included here.

The types of bread with the highest hydration levels are rustic and artisan bread. Yielding an airy crumb; ciabatta, focaccia, and sourdough are usually 70 to 80% hydration.

How to prevent dough from losing weight when baked?

The weight loss for bread is a normal process during baking, and usually, some bakers just let it be. But that doesn’t mean that we can’t do anything about it, especially if your bread is losing a lot of weight. When you’re making bread, there are a few things you can do to reduce the loss of weight:

How much water is lost in sourdough starter?

There are different hydration levels for various recipes, so the amount of water loss in sourdough will also vary. I tested how much water was lost between the feeding of my starter. The result was approximately 0.5 grams were lost from 220 grams of starter. This will depend on the keeping conditions of the starter and how well the lid is sealed.

Typical scaling weights and weight loss percentage to expect based on a loaf fully cool. Results will vary depending on the ingredients and processes used.

How much does a 2lb loaf weigh?
The dough required for a 2lb loaf tin is 910 grams. This will provide a baked white loaf that weighs roughly 785 grams.
What percentage of baked bread is water?
As water is the majority material lost during baking we can take the amount of water from the recipe and deduct the weight lost. This means a standard white tin loaf at 68% hydration, contains around 30% water.