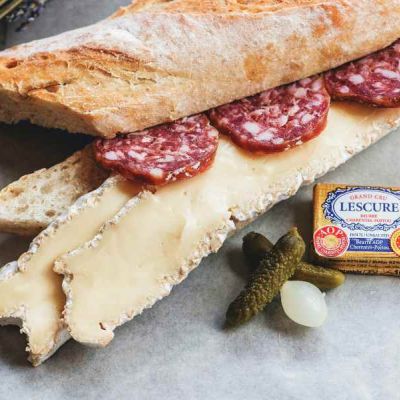 What is a baguette? If you assume it is something French, you would be correct. Baguettes are traditional French bread that dates back to the 1940s. Variations such as the “Ficelle” date even further back. A baguette is a long, thin, crusty type of bread often known as simply, a “French stick” outside of France.

Did you know that a legal decree in France regulates traditional baguette dough making? Yes, it is true. The main ingredients when making baguette dough include wheat flour, yeast, salt, water, and additives. These ingredients combine to make the soft on the inside with a perfectly crusty crust – what baguettes are known for.

With such specific criteria, you would think there would be just one type of baguette. But, instead, you will find that there are a few different baguette types, including:

They are all slightly similar, but there are some differences. Nevertheless, all of them are rather tasty treats for non-French residents, but my recent trip confirms they are an everyday essential in France.

One of the baguette types is the ordinary baguette, to get one in France, you’ll just ask for “une baguette”. Known for its crisp golden-brown crust, you will find that this baguette is mass-produced and sold in many grocery stores in English speaking countries. However, just because the name has ordinary in it, does not mean that it is ordinary tasting. This traditional French bread is good as a stand-alone quick bite to eat or served with cheese or even with a bowl of soup.

The artisan baguette or “baguette de tradition” is made fresh on site. You will not find this baguette mass-produced or sold in grocery stores. Generally darker in colour with a thicker crust than you will find in the ordinary baguette, this loaf is made with few artificial additives. So if you ever get a chance to give this one a try, do yourself a favour and buy a loaf. This one will melt in your mouth!

The moulded baguette or “baguette moulee”. You make this baguette using a baguette pan – usually made of perforated metal. Using this pan during baking helps hold and form the dough during the baking process. It also means that the baguettes can be shaped quickly using a baguette roller. These types of baguettes are not stonebaked like artisan baguettes.

You can recognize baguette moulee by the delicate lattice pattern found on the bottom of the loaf. It’s not a speciality baguette, but it is very tasty and is the type that is produced by many supermarkets and bakeries on site.

This traditional French bread gets its name from the process of lightly dusting of flour it receives prior to baking. Baguettes proofed in a floured couche often have a little flour remaining on the surface of the dough, but this type of baguette will be dusted again before scoring and baking. It is also lighter in colour than the others.

This one stands out due to its superior quality and large tasty personality. Enjoy as a stand-alone treat, or try it with soup, bruschetta, or crostini recipe. However you choose to eat it, I doubt you will be disappointed!

A less commonly known baguette type, the chocolate baguette or “baguette au chocolat” – is a delightful tasting experience. If you like chocolate, that is, and who doesn’t? Picture it, a fresh artisan baguette blended with the delightful sweetness of chocolate.

This baguette isn’t chocolate chip bread. Instead, you make this bread by incorporating chocolate right into the dough. We know you just searched to find a bakery near you that sells these. I did too. Although we also think it would be fun to try making this ourselves. After all, we can eat our mistakes, right?

A healthy, flavoursome sandwich bread that’s made with seeds, often with a combination of hearty flours such as wheat, rye, oat and barley. The seeds used in a “Baguette multicereal” vary with sunflower, poppy, yellow and brown flax popular choices. Can also be classed as a High fibre, or Low GI bread. A popular variation includes rolling the baguette in oats before proofing.

There are two types of whole wheat baguettes in France. The “Pain complete” is a chewy brown bread with a tight, moist crumb made with white and whole wheat flour. “Pain intégral” is made by just using 100% whole wheat flour for more healthy and flavoursome bread.

Pronounced “a lan-syen”, baguette a l’ancienne means old-fashioned baguette. It utilises fridge proofing to slow down fermentation and produce sweet and interesting flavours. Arguably the best style of baguettes in France.

A soft and sweet baguette that originates from the bakers that settled in France from Vienna. A “Viennois” is made from an enriched dough containing sugar, egg and butter. Sold across the world, including many French bakeries for use in sandwiches, or with chocolate chips included in the dough, as a snack or dessert. The baguette Viennoise is what many Americans use to classify “French bread”.

A “Baguettes tradition au levain” is made using sourdough instead of yeast. The benefits of sourdough improve the flavour, texture and health benefits of the bread. A baguette made with sourdough is often the most precious type of baguette sold in a bakery. You can find out how to make your own with my sourdough baguette recipe.

Not related to the shape of the baguette, a poolish is a preferment commonly used as an alternative to sourdough. It uses a small amount of yeast, mixed with a portion of the recipe’s flour and water. The mixture is combined and left overnight where the yeast ferments to develop flavour and matures the flour. The result is a superior baguette with more flavour and a more open crumb.

The Ficelle is the original baguette, related to the Napoleon era mentioned below. It’s a very thin version of a baguette that is often used in sandwich bars in France.

Rye is a hardy grain that’s grown in poor soil areas. It is a staple food in northern and eastern Europe with many Scandinavian and German bread types made of it. “Baguette de Seigle” is a rye bread baguette, full of malty rustic charm and a top choice for the health-conscious!

A “flûte” is generally a smaller baguette that’s between a full-sized baguette and a demi-baguette. But some bakeries have their own rule and make a larger sized baguette! A flute is proofed a little longer than a baguette so the cuts made by the baker open up less. This produces a straighter baguette with a slightly softer crumb, but it’s down to the bakeries’ interpretation!

Not strictly a baguette due to its shape, but is made with baguette dough and you’ll find it in the baguette section of a bakery. A proofed baguette is cut with scissors and opened up into this unique shape before baking. A delicious treat that can be pulled apart, shared… or not.

How did baguettes get their shape?

We have covered different baguette types. But, all the different types have the same shape. So, where did the shape originate? Especially since it is very specific. There are a few theories that have developed over the years. To date, none have been proven. But it’s fun to speculate. And, who knows, one or more theories may be the correct one.

I discuss the question further in the history of the baguette article. No matter how the baguette shape came to be, there is no doubt that they are a delicious treat. No matter what type you try – and let’s be honest, don’t you want to try them all? Look for a local baker, and you may find these baguette types, and probably fall in love with them.

Perhaps you want to try your hand at making them. The ingredients are simple. All you need is some good, easy-to-follow recipes and a fair amount of patience. We all know how important patience is when it comes to making bread. And that goes for any type of bread. So, go ahead and give it a try. Let me know how it goes, and which Baguette is your favourite in the comments below.