What Is The Best Bread For Bruschetta? 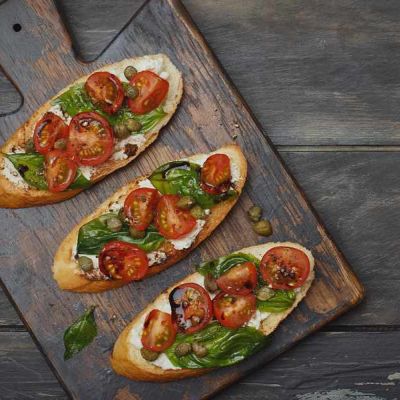 I don’t know anyone who doesn’t like bruschetta, it’s absolutely divine! After ordering it in restaurants near me a receiving frozen bread from the supermarket or those “part-bake baguettes” I’ve started to make my own again. It’s a great way to use up yesterday’s loaf, but what is the best bread for bruschetta I asked myself? Well, here’s what I found out:

Traditionally in Italy, bruschetta is made by toasting slices of bread called “Pagnotta”. This is a bread made from durum wheat flour and an Italian sourdough starter and baked in a wood oven. Outside of Italy, this bread is hard to find so ciabatta is the best bread for bruschetta. It is crusty and sturdy enough to hold generous toppings of tomatoes, mozzarella or anything else you wish to use!

What is bruschetta bread?

Bruschetta is an Italian appetizer that originated from the word “bruscare” which translates as “to roast over coals”. It’s a grilled bread that’s often garlic-rubbed and topped with tomatoes or various other topping combinations. It has enjoyed increasing popularity in the United States since ciabatta bread became available in grocery stores in the ’90s, yet is traditionally made with slices of larger rustic Italian bread.

Crostini are made with baguette-size bread slices that are brushed with olive oil and grilled. These Italian “crisps” are used for canapés with savoury toppings such as cheese, shrimp, pâté or anchovies. Bruschetta is an Italian appetizer made from toasting slices of bread which are then topped with tomatoes and other classic Italian ingredients.

Is bruschetta Italian or French?

Bruschetta is an Italian food made from toasted bread originally rubbed with garlic and topped with olive oil, salt, and pepper. It dates back to the 15th century in Italy. The dish however has links to Ancient Rome, when olive growers would taste a sample of their freshly pressed oil using a slice of bread at the local olive press.

Why is ciabatta the best for bruschetta?

Can I make bruschetta with a baguette?

The French baguette has a crisp crust, which can handle being grilled or toasted on both sides without burning. It makes great bruschetta! The inside of the bread should be airy and light with just enough elasticity to absorb all of the delicious flavours of the toppings. You can also slice the baguette like a sandwich for some big chunky slices!

Can I make bruschetta with sourdough?

Sourdough makes amazing bruschetta! Its rustic crumb that has so much flavour combines beautifully with all of the popular bruschetta toppings. Sourdough bread is going to be similar to the original bread for bruschetta, the Pagnotta. It’s a great way to use up any couple of days’ old sourdough too!

Can I make bruschetta with focaccia?

Focaccia can make a really interesting bruschetta, providing you match your focaccia and bruschetta toppings! A lightly flavoured focaccia such as rosemary and sea salt focaccia makes a great base for toasting and topping with bruschetta ingredients. Just go easy on the olive oil if the focaccia is already oily!

What is the topping on bruschetta called?
It’s an antipasto made from a mixture of chopped tomatoes, balsamic, basil, and garlic. It’s spooned over olive oil brushed slices of toasted rustic bread.
Do you eat bruschetta hot or cold?
Bruschetta is best served fresh. Allowing the bruschetta to sit will make the bread soggy as it will soak up juices from the tomatoes, mozzarella, or other toppings.
What’s the best cheese for bruschetta?
Mozzarella works best because of its smooth texture and fresh flavour. Fresh mozzarella is best but string cheese can also be used. Use a handful of fresh mozzarella for each bruschetta topped with 2-3 tomatoes per slice of bread.
Do I have to use basil with bruschetta?
No, though usually, classic bruschetta does include basil. Other great classic Italian bruschetta toppings include coarse salt, extra virgin olive oil and black pepper and diced tomato and onions. Be creative with your bruschetta, the best appetizers are those that have a bit of everything!
Can you grill ripe tomatoes for bruschetta?
Yes! Grilling ripe tomatoes can enhance the flavour of the tomato and make it sweeter. Just make sure to grill until the skin starts to wrinkle a bit, don’t let it get too wrinkled or burnt.
Can you toast baguette slices for bruschetta?
You sure can! You just need to be mindful that if you toast your bread for too long, you will get a crunchy bruschetta instead of an oozing cheesy one.
Where did bruschetta originate in Italy?
Tuscany is the region of Italy where bruschetta originates. It is known as an “oiled slice” or “fettunata” in this area and Tuscany bread, made without salt is used to make it.
What spices are best for bruschetta?
The best spices for bruschetta include basil, oregano, rosemary, garlic powder, salt, pepper and olive oil. These seasonings bring out the flavour of the bread and the other ingredients such as cheese.