What Is The Glycemic Index Of Sourdough Bread? 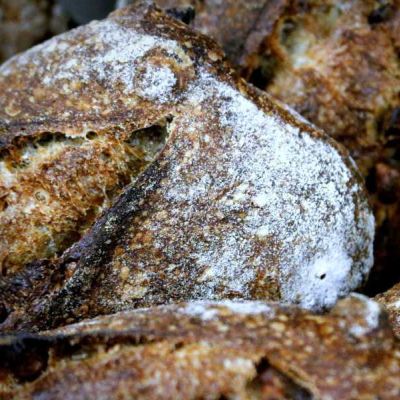 Many people prefer sourdough bread over regular white bread because they believe that it’s healthier. This belief, along with its gorgeous flavour has led to sourdough bread becoming increasingly popular. But, does the long fermentation process of making sourdough actually lower its Glycemic Index? Let’s find out!

Sourdough bread has a Glycemic Index of 54 which is much lower than regular white bread, at around 72-90. The reason sourdough bread is low GI is its long fermentation process which lowers its starch content. Sourdough can be considered in a low GI diet and is great at controlling blood sugar levels.

What is the glycemic index?

The glycemic index (GI) is a scale used to measure how a food raises blood sugar levels. It helps sugar-sensitive individuals watch and manage what they’re eating. This includes diabetics and those watching their sugar levels

Food ranks on a scale of 1-100. The lower the number, the better for individuals.

High GI foods are ranked at 70 or greater. This group of food includes:

Low GI foods are ranked at 55 or lower. Usually, these are:

What does this GI mean for diabetics?

If you have been diagnosed with diabetes then the impact of high GI foods is important. With the GI index, you can select food that suits your needs and avoid those that don’t. Eating low Gi foods regularly will prevent:

With the help of GI, diabetics can plan ahead. Regularly consuming low GI foods improves the body’s response to insulin and decreases the risk of type 2 diabetes

Is sourdough bread better for a low GI diet?

Why does sourdough lower the glycemic index?

A sourdough goes through a lengthy fermentation process. Here the starch is broken down into sugars which then get used by the yeast and organic acids. The organic acids in sourdough also delay the absorption of sugars into the body.

There are 2 main types of organic acid produced in the fermentation process of sourdough.

Lactic acid slows the absorption of starch and sugars in our bodies.

Acetic acid delays the gastric emptying rate. This is the speed at which substances leave the stomach after ingestion.

Researchers haven’t entirely found out why sourdough bread has a better effect on blood sugar and insulin levels than other types of bread. It’s believed that sourdough particles are able to modify the carb molecules of a dough somehow. This results in the reduction of the bread’s GI.

Of course, eating sourdough bread will be less likely to make your blood sugar levels rise than commercial bread. It also produces fewer phytates which are the antibodies that bind to minerals and prevent them from being absorbed in our body.

Should I eat sourdough bread if I eat a low GI diet?

Definitely! Sourdough bread is great for people who eat a low GI diet. Sourdough bread has a lower GI than the usual white bread, it’s also a great source of fibre, B vitamins, and minerals. If you’re diagnosed with diabetes or you’re just trying to reduce the risk, it’s best to have sourdough bread instead of standard sliced white bread.