Why Does My Bread Smell Sour? 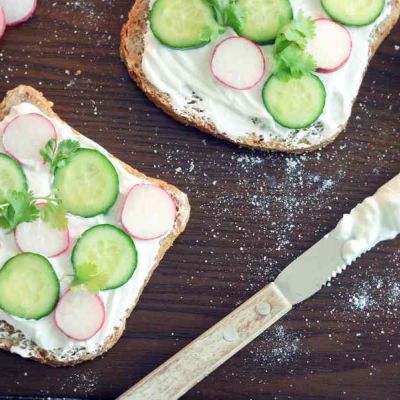 All of us love the smell of freshly baked bread in the morning, especially the kind that comes straight out of the oven. But if it is too sour, how can this be fixed? Well, let’s take a look at why does your bread smell sour, and what can you do to prevent sour bread!

Sourness is related to acid which builds up in over fermented bread or sourdough starters. The two main acids, lactic and acetic both offer slightly different sour flavours. Lactic acid is more creamy and yoghurty, whereas acetic acid tastes like vinegar.

Why does my bread smell sour?

You are probably aware that carbon dioxide makes the bread rise by expanding the gluten. But as dough ferments, it develops lots of lactic acid bacteria alongside alcohol and carbon dioxide. The key ingredient to making fermentation happen is yeast. As dough develops, enzymes break down starches in the flour to produce lactic and acetic acid bacteria. These then produce lactic and acetic acid.

Bread that undergoes a short fermentation period i.e a quick first and second rise, will have fewer acid bacteria. They are actually really important as they help mature the gluten, retain gas, produce gas and help to keep the bread once baked, fresh. If you take a look at the ingredients of store-bought bread labels you’ll likely see that vinegar or anti moulding ingredients are included. This is to compensate for the lack of organic acids in the bread.

But if yeast bread is left to ferment for too long, acids can multiply and overpower the taste of the bread. They can still produce gas therefore the dough will rise, but the flavour of the bread can be sour.

Another reason for a sour-smelling bread is too many acid ingredients were used in the dough. Ingredients such as yoghurt, cream of tartar, baking powder and vinegar can combine to produce a very sour bread!

Whole wheat flour contains more complex starches and proteins than white flour. It takes longer for the water to hydrate the flour which slows down the fermentation process.

What often happens is the yeast has little available sugar to ferment as the starch in the flour is not broken down. This means that organic acid production occurs while less gas is produced and the whole grain bread is more acidic and bitter.

To counteract sour whole wheat bread, there are a few solutions:

These options will provide mean the bread proofs faster and will taste less sour.

Why does my sourdough bread smell sour?

Well, it’s in the name, Sour-dough! Not all sourdough bread is sour though. It can be a bit of a shock if you slice into a loaf and discover a massive lactic twang! The majority of the sourness (or lack of) flavour comes from the starter. Lactic Acid Bacteria (LAB) is vital in a sourdough, it is actually responsible for producing more gas than the wild yeasts a starter attracts.

In a mature starter, wild yeasts, LAB and acetic acid bacteria work in harmony to digest the minerals it is presented in the form of fresh flour and water. As the flour is digested through a series of reactions carbon dioxide, alcohol and organic acids are produced. This is how sourdough bread dough rises, it’s also how it gets its sour flavour.

The most likely reason your sourdough bread is too sour is that you allowed your starter to sit at the top of its rise before feeding it. Or let it collapse before feeding. This lets acid bacteria multiply to produce a sour flavour.

You can adjust the flavour of the sourness. Acetic acid prefers a warmer temperature, around 95F (35C), whereas a starter that is cultured cooler, say 77F (25C) will contain more lactic acid and taste more like yoghurt. Stiffer starters have a higher population of lactic acid bacteria, whereas high hydration starters are vinegary.

Why does my bread dough smell sour?
Over fermentation, too many acidic ingredients or an over-ripe sourdough starter can cause sour bread dough. After baking, the sour smell of bread dough will likely diminish. If your bread dough smells sour when it shouldn’t, get it into the oven as soon as possible.
How to avoid dough sourness?
To avoid sour-smelling dough, reduce the amount of yeast, use a desired dough temperature formula to calculate the ideal temperature for your water and shorten the proofing time.