My Sourdough Starter Sinks In Water? What Should I Do? 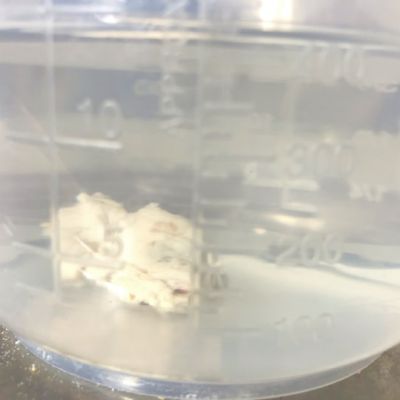 The float test is a widespread method to determine if a sourdough starter is active enough to make bread. But there are a lot of people who say that the float test does not work. So does it matter if the starter sinks to the bottom of a jug of water?

This article questions if the float test is accurate and what you need to do if a sourdough starter sinks in water.

The float test proves whether the starter can create and trap gas. If a piece of sourdough starter sinks in water, it may mean that the starter isn’t active enough to proof bread. But it can also sink for other reasons which won’t prevent the bread from rising.

How does the float test work?

As the yeast and organic acid bacteria in a sourdough starter ferment, bubbles of carbon dioxide are produced. The CO₂ is trapped within the gluten network of the flour. This makes the starter rise, or when added as a levain for sourdough bread, it makes dough rise.

How to do the float test

Why does my sourdough starter sink?

A starter or dough needs a good gluten structure to retain gas. It also needs to be mature enough to be able to produce enough gas.

Sometimes the structure has not matured enough, this could just be a short term issue and allowing the starter a little bit longer after feeding will resolve the issue. It could also be a sign that the starter needs a few more days of regular feedings to improve its activity.

But a starter can also not rise because it has overdeveloped too. This can happen if the starter collapses after it peaks and is then left for several hours. The lactic acids break down the gluten network making it less able to retain gas.

The starter could sink even if it is perfectly healthy, here’s how:

Why a good sourdough starter sinks in water?

The amount of water used in the starter

The standard refreshment ratio for sourdough is 1:1:1. That’s 100 grams of water for every 100 grams of flour and 100 grams of old starter. If more water is used, you may have something that’s too gloopy and unable to hold gas. This starter might work great as a leavin, but in the float test, it will just break down into the water and sink.

Likewise, a stiffer starter is more able to retain gas and float.

How absorbent the flour is

The type of flour you use will affect how fluid or dense your starter is. A white flour starter is going to absorb less water than a wholemeal one. Neither is better for the bread, but less absorbent flours will need less water during refreshments if you want them to float.

It’s easy to push the gas out of the starter when testing. Just squeezing it lightly with your fingers during the test can degas the dough considerably. This makes the  starter unable to float whilst capable of leavening dough.

The amount of protein in the flour

A starter made with white bread flour with a medium to high protein content is more likely to float than 100% rye. This is because there is more strong gluten to hold the gas.

When using a low protein flour in your starter such as rye, there will be visible holes showing gas production. The smell can be great, but it’s less likely to pass the float test.

Does this mean the starter isn’t good? No. A rye starter can still raise bread.

How do I know if my sourdough starter is ready to use?

Look for bubbles. As a starter matures, expect to see plenty of bubbles as well as a mature, yet sour smell. How rounded the starter smells is a great indicator of a healthy sourdough. You should also see the starter rising at least double in size after feeding.

Once it passes these tests, you can use it to make sourdough bread.

When to use the float test?

Much as I’ve slated the float test, there is an instance when I’ve used it. If we roll back a few years when I managed yeast bread bakeries, there would occasionally be a baker who may have forgotten to add the yeast to the dough. Of course, they would deny it but as they’d sat in the proofer and not moved I would say it looked suspiciously like they had made a mistake. Here’s what we would do:

To test if there is yeast in a dough, tear a piece of the dough and place it in a jug of warm water. Then wait to see if it floats.

I’m sure you can guess what happened every time!

Is the float test just another kitchen myth?
The float test is not a kitchen myth, but it isn’t the best indicator of a starter being ripe. Different situations affect how well a starter floats that have nothing to do with how ready a starter is. A starter that isn’t ready can still pass the float test, and active ones often fail.
What flour is best for a sourdough starter?
Gluten can break down when it’s been matured for too long. This is due to the number of organic acids increasing and as they run out of fresh flour, they start to eat the gluten strands. High protein flour has more gluten, making it more tolerable for long fermentation. They also generally retain more ash in the milling process which adds minerals that act like food for the bacteria to consume.
Why does my sourdough starter never float?
A starter that will not float is not necessarily a bad sourdough starter. It may just have the ability to float. This could be due to the flour used or the feeding ratio. Instead to tell if it is ready, see how high it rises, how long it takes to rise, signs of bubbles and its smell.