Sourdough Health Benefits – Is Sourdough Bread Good For Me? 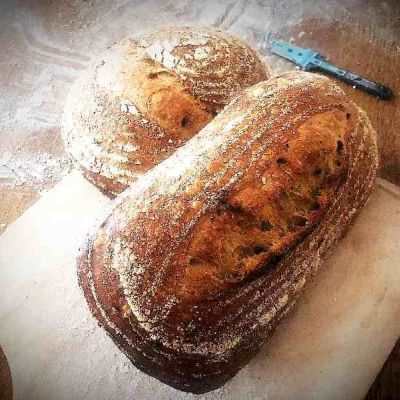 You have seen sourdough bread listed on many sandwich boards, in the grocery store, and at the local bakers. How does it differ from other loaves of bread? It’s definitely more flavourful than most yeast bread, yet some people believe it is much healthier. So is sourdough bread really healthier for you, and what are the sourdough health benefits when it comes to eating it?

What is sourdough bread?

Sourdough is a live culture of naturally fermented flour used to leaven bread that’s been around for ages. Believed to have been created in 1500 BC, which means it is thousands of years old! It is one of the oldest known fermentation processes. Sourdough levains were in widespread use across the globe until they were largely replaced in the 1800s by baker’s yeast.

You will find that baker’s yeast is used most often in loaves of bread to provide the rise. However, wild cultured yeasts are used when making sourdough bread. These wild yeasts combine with natural bacteria to ferment the sugars found in the flour to produce Co2.

This water, flour, wild yeast, and bacteria mix is referred to as wild or live starter yeast, but the Lactic Acid Bacteria (LAB) is also responsible for producing the majority of the gas during heterofermentative reactions.

A mature sourdough culture or “starter” is added to flour, water and salt to make a risen bread dough, ready to be baked in the oven. There is no need to add any baker’s yeast to sourdough bread, but some manufacturers “cheat” and add some in for speeding up the rise.

How do you make a sourdough starter?

Interestingly, once you start a sourdough starter, you can keep it on hand as long as you keep feeding it. Yes, this is true. Sounds easy, right? And it is. And kind of fun.

So, you start out by fermenting flour and water. That is it! Think of it as your own living science project. But, in a good way. Once you have a good batch going, you can separate it and feed each one to create new starters. This can be used over and over again to make new starters and loaves of delicious sourdough bread.

There are plenty of airborne yeasts which become absorbed by the culture. Once you have a good starter going, it will last forever. My sourdough starter has been feeding for 5 years and is still considered reasonably new.

It takes 7-14 days of regular feedings for a new sourdough culture to develop. After that, you’ll have an abundance of leaven which can be used in your favourite recipes! Once you have a good starter going, you can share it with your family and friends.

Worried if your starter has died? Well, they don’t really die. Starters have been found preserved over a thousand years old. They are more likely to cultivate mould than anything. If you think your starter yeast has died, try feeding it once or twice a day to get its activity level up. If there is no life or bubbles to be found after a couple of days see this is my starter dead post.

What are the health benefits of sourdough over yeast bread?

Sourdough’s health benefits include being more nutritious than regular loaves of bread. Sourdough bread can use the same flour used in other bread doughs. However, the yeast fermentation process improves its nutritional value. Let’s take a look at the top health benefits of sourdough bread:

Whole-grain loaves of bread, for example, are high in minerals such as zinc, phosphate, potassium, and magnesium. But, unfortunately, they contain phytic acid, also known as phytate, which limits the absorption of minerals when digested.

Surprisingly, the bacteria found in sourdough bread lowers the pH of the bread, thus, aiding in the deterioration of phytates. The result – your body is better able to absorb these minerals.

Sourdough fermentation is also known to increase the folate levels found in bread, although certain nutrients, such as vitamin E, may get reduced in the fermentation process.

The longer fermentation process of sourdough bread improves the flavour and texture of the bread. Thus, resulting in people choosing whole-grain sourdough bread over other types of flour.

Sourdough is easier to digest

Many people struggle to eat bread due to digestion issues. Carbohydrates are often the root cause of digestive issues. Digestion problems can lead to upset stomachs, indigestion and constipation or diarrhoea among other things!

Several sufferers find that converting to sourdough bread relieves digestive unpleasantness. This is because, before the starches in the grains reach your stomach, the bacteria-yeast combination will start to break them down. Meaning, there is a lot less work digesting, making it easier on your stomach.

The sourdough fermentation process is typically much longer than yeast-leavened bread. This degrades the gluten further. Gluten is a protein found in certain grains. People who are sensitive or allergic to gluten may experience digestive issues when consuming bread. Gluten sensitivities vary depending on the person.

One of sourdoughs health benefits is the ability to assist in controlling blood sugar. The reason behind it is not fully understood yet, but sourdough may affect blood sugars and insulin levels better than other types of bread. Researchers believe the fermentation process modifies the structure of the carb molecules, reducing the bread’s glycemic index (GI); slowing the rate that sugars enter the bloodstream.

Additionally, the lactic acid bacteria in the dough produce organic acids during the fermentation process. Which could help slow the stomach’s digestion, preventing spikes in blood sugar.

You eat less of it

Sourdough has more flavour, a fuller smell and is better absorbed by fillings than boring sliced bread. Sourdough bread is more satisfying than its counterpart. The upside is you’ll eat less of it in a meal. If watching your diet, eating sourdough bread can be a great solution for eating fewer carbs!

Does Sourdough bread have probiotics?

Is one of the sourdough health benefits containing probiotics? Not to confuse you, but the answer is yes…. and no.

Sourdough starts off containing probiotics; that is what the starter is, after all – good bacteria. However, the bacteria will die off as the bread is baked due to the temperature when baking. So, no, once baked, sourdough bread does not contain any probiotics. But, it is still healthy since probiotics were present during the dough-making process yet, prebiotics will remain in the bread after the baking process.

How to make sourdough bread even healthier

Sourdough bread is good for us, but there are ways to improve the health benefits of sourdough further. Here are a few tricks that I use to keep things healthy:

Making bread at home has a soothing effect on me. I enjoy the process of creating something innovative with my hands. It’s methodical and quite relaxing, and many people who suffer from anxiety find listening to music whilst baking bread helps them relax.

Kneading by hand is an excellent light exercise. You may use a strong physical technique for maximum gluten strength or a slower, more delicate approach to achieve the same goal.

The majority of sourdough bread producers are artisan bakers. Most artisan sourdough producers use only flour, water and salt. But there are a few that sneak extra ingredients such as yeast or dough improvers to accelerate production.

Making sourdough yourself is fresher and you don’t run the risk of it containing any naughty factory ingredients that are harder to digest. It’s great fun too!

In long-fermented bread, more starch is broken down leading to an easier to digest bread that is full of more complex bacteria. It’s great for our body’s system!

Wholemeal flour is a more nutritious choice than white because it contains the bran of the whole grain. The fibre from all that brown goodness will keep you full for longer, and complex starch particles are better with your body since they take longer to break down into glucose – giving off steady streams of energy in return!

Wholemeal homemade loaves are often full of nutrients but also tricky to put together! You should start off by using 30% whole wheat flour and 70 white for best results, later if you’re feeling up-to-it move on to making 100% all whole wheat or multigrain varieties.

Seeds are a delicious source of fibre, monounsaturated fats and polyunsaturated oils. They also contain important vitamins such as vitamin C! Seeds reduce cholesterol levels which helps with blood pressure–and the antioxidants in these little fruits can protect your heart from free radicals that might cause damage to cells over time. Seeded sourdough bread tastes delicious too!

Try making your own loaf of sourdough bread

Try making your own loaf to seek full sourdough health benefits. We talked about store-bought sourdough bread not being as healthy as those produced in a bakery. Or even homemade. Making your own sourdough is very easy—just a few simple ingredients. So, go ahead and give it a try. And, remember, once you have your live yeast growing, you can share it with family and friends.

There are many sourdough bread recipes you can find, but the steps are simple.

The sourdough health benefits make it an excellent bread choice over other types of bread. With its lower phytate levels, it is easier for you to digest and has more nutritional value.

Sourdough can assist with controlling blood sugar. Unlike other loaves of bread, this dough produces organic acids that slow your body’s rate of digestion, preventing blood sugar spikes. Even though sourdough technically does not have probiotics as a finished product, it does start with them, which is helpful to your gut.

Sourdough is a simple bread to make. It has very few ingredients. Requires very few steps when making it. You can play with the recipe to create some fun, unique loaves of bread. And, you can create your own living, “wild” yeast that you can keep and use for years and years. Even give some of it to family and friends. Just remember to keep feeding it. When it comes right down to it, there are many sourdough health benefits over other types of bread.