Why Is My Sourdough Bread Gummy? 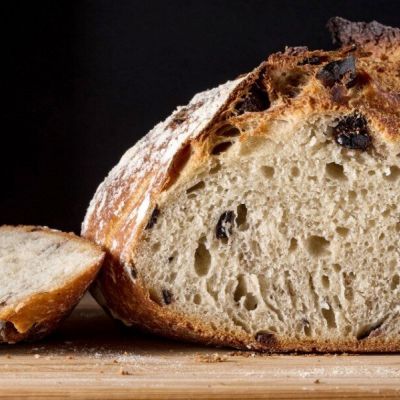 Are you finding your sourdough bread is too gummy? An inedible disaster or just a slight annoyance? Either way, it prevents perfection and I want you to make bread that you’re proud of. So, want to find out how to stop your sourdough bread being gummy? Well, good news I’ve compiled the reasons why your bread is gummy, and how to fix this unpopular defect.

The overarching reason your sourdough bread is gummy is too much moisture. This could be from an overly wet dough, an oven that’s too cool, or a proofing issue. But before you make any changes to fix your gummy crumb, make sure your starter is fully active first!

What causes a gummy crumb in sourdough bread?

Here are the things that can make sourdough bread gummy, what to look for and how to make the problem go away:

#1 The flour was not right for the recipe

Different flours are better suited to certain situations. Some flours, when pushed too long during bulk fermentation, will collapse before reaching the windowpane stage. Others can be high in protein, making them suitable only for quickly made yeast bread or super-high hydration sourdough. Using extra strong flour in a standard sourdough recipe will lead to bread that’s hard or gummy.

Flour can be tested with all sorts of modern equipment to determine their stress levels but, of course, we don’t have access to them at home. We generally base the suitability of flour on its protein content. Sourdough bread is usually made with flour that contains 10-12% protein. But it’s not just down to the quantity of the protein. It’s the quality of the proteins that is just as important.

If you think your flour choice is making your bread gummy:

#2 The dough was over-hydrated

A simple fix for gummy sourdough bread is to lower the amount of water in the recipe. Excessive water gets in the way of the gluten, making it harder to stretch and retain gas. If the extra water doesn’t escape during baking and cooling a dense bread that’s gummy will be produced. If your dough is too hard to handle or too wet to knead, reduce the water in the recipe or read my guide on how to make your dough less sticky.

#3 The starter was not ripe enough

A weak starter is the cause of most sourdough bread problems! It’s so important that you take good care of it and make it nice and active before using it. If the starter is unripe it won’t have enough healthy yeast and bacteria to proof the dough. The result is dough that takes so long to rise that its structure deteriorates with one of the common defects being a gummy crumb. A ripe sourdough starter should be at least doubling in size and beautifully fragranced before use. View my starter recipe for more tips on making a starter.

#4 Your sourdough was not properly proofed

A gummy crumb is a common trait of over-proofed sourdough. Basically, the gluten structure collapses as in the oven, making it near impossible for moisture to escape.

#5 The oven was too cool

If a loaf is baked in a cool oven it can easily end up gummy. This is because the bread is baked for longer, making the crust thick and hard. The robust outer barrier will then prevent moisture from exiting the core of the bread. For a dryer crumb, we want the crust and the gluten matrix to set quickly and moisture to pass easily through the crust as the bread cools.

A hotter oven is the solution. Oven spring is also more prolific at higher temperatures.

What is the ideal oven setting for bread?

How to tell when your bread has finished baking?

To check crusty bread is baked thoroughly, remove it carefully from the oven and tap the base. If it sounds hollow, it’s ready, if it’s dull, bake some more. For more accuracy, test the core of the loaf’s temperature with a probe. A temperature between 90-100C (190-210F) is acceptable but experiment to suit the texture you desire. The warmer the temperature, the less moisture will exist in the baked loaf.

#6 Too much steam was added to the oven

Bakers who leave a water bath in the oven for the duration of the bake may experience the cuts not opening up fully and a discoloured, soft and thick crust. A water bath is a great way to add steam to the oven. It’s a method that creates a vast amount of steam, so is ideal if your oven leaks a lot. Releasing the steam after the oven spring has finished lets the crust set and then harden. This should be done after the oven spring has finished, after around 15-20 minutes of baking. Not removing the steam from the oven creates a soft, thick crust which is a contributing factor to preventing moisture escape the crumb.

In specialist bread ovens the steam is released by opening the damper. The damper is a plug that covers a little hole at the back of the oven. Opening it up allows the steam to exit. We can recreate this in a home oven by opening the oven door every few minutes. Ideally, we want a small amount of airflow to remove the steam from the oven. This is hard to do in a home oven without a damper as heat also disappears out of a gap. Most home sourdough bakers find lifting the lid on their Dutch oven does a pretty good job. Sometimes removing the bread out of the Dutch oven and baking it on the shelf for the last few minutes has a positive effect.

#7 The bread cooled in the oven

When the bread looks ready, some bakers turn the oven off and leave it inside for 20 minutes to make their bread less gummy.

Should you do this? No! Water activity is at its highest when the bread is hot. It’s at this point that the steam should be escaping out of the bread. When bread cools in the oven, high pressure and a lack of cool airflow prevent moisture from escaping the bread. Improper cooling and bread not cooled for long enough can trap water in the bread, making it more gummy.

#8 Too much sugar was used in the recipe

Sugar diverts water and creates osmotic pressure in the dough. This affects the yeast’s ability to function, leading to a slower rise and depleted oven spring. Excessive sugar levels produce a dense, compact crumb that’s sticky due to the extra water.

#9 Too much malt flour was used in the recipe

Activated malt flour produces an abundance of simple sugars. If they are not consumed by the yeast they will absorb water and make the bread taste sticky and gummy. If you are using malt flour in your bread, omit it and notice the difference. It should only be used to enhance certain flours or in specialist recipes.

#10 The bread wasn’t cooled before slicing

Bread continues to let moisture escape from its core as it exits the oven. To do this effectively you’ll need to cool sourdough bread with plenty of airflow around it. You should always let your bread cool down to blood temperature (37C or 100F) before slicing into it. I leave mine on a cooling rack for at least 1½ hours before I enjoy it!

How do you fix gummy sourdough bread? – Conclusion

Work through the steps to ensure your bread develops to retain enough gas, rises to the perfect level and has a fast, effective bake. Follow these steps with good quality flour and you’ll be assured of gummy-free bread going forward! What do you think your issue is? Let me know in the comments below