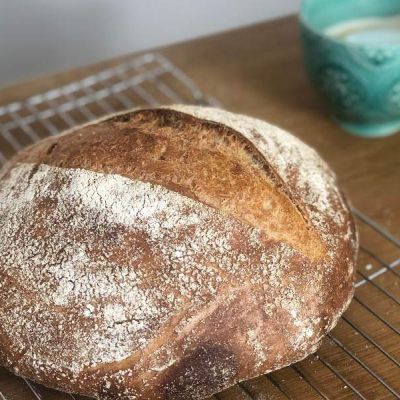 Every baker has been guilty of ripping into sourdough bread straight after it comes out of the oven. After the long process of baking, who would want to wait, right? The aroma of freshly baked bread seduces you into slicing it and having a bite. But should you, do you need to wait for sourdough to cool before eating it?

Water evaporates from the bread during the baking process, yet, as freshly baked bread leaves the oven, a lot of moisture remains. To avoid the bread being gummy, most of the water needs to exit the bread before it’s sliced. Air flowing around the bread takes water vapour from the crust to the atmosphere. Allowing sourdough bread to cool on a rack is the best way to cool bread at home. Sourdough bread should cool until it reaches 35-38C (95-100F) before slicing, which can take between 2 and 6 hours.

The best way to cool sourdough bread at home

All your hard work could turn into waste if you don’t let your bread cool down properly. Always make sure that you have sufficient airflow, a cool environment and that the bread is given enough time to cool. This will mean your sourdough bread is at the right temperature before slicing it.

What happens when bread cools?

Letting the bread cool is the final step of baking. It’s often not taken seriously by bakers (even some professionals!), but it is an important stage in the bread-making process.

Cooling is crucial as it’s one of the determining factors in how your finished bread will look.

During the cooling process, the following things happen to the bread:

Cooling bread causes the starch to turn back into its natural state through the process called “Retrogradation”.

You may have noticed a shiny substance that appears in the crumb? This is also due to retrogradation. Here, syneresis expels water from the bread structure and turns it into a gel.

A small amount of starch retrogradation is great for bread, especially when it comes to slicing. Over time though, retrogradation leads to the bread turning dry and stale.

When the hot bread is exposed to an environment that has a lower temperature. The core of the bread loses heat through its surroundings. This is called heat transfer.

The crumb section of the bread contains most of the moisture content.

During cooling, evaporated water migrates towards the crust area, as it has a lower moisture content.

If the bread is still hot, some water is absorbed by the starch particles on the outer crust area. These particles expand until they explode, releasing a shiny gel that hardens as the bread cools into a crispy sheen.

Why should you let the bread cool down first?

As moisture inside the crumb exits the crust, bread becomes easier to slice. Not allowing the steam to exit is a likely cause of a damp and gummy loaf. This has benefits in terms of texture but also enhances the natural flavour of the bread to shine through.

Other ways to cool sourdough bread

You can actually cool sourdough bread with three methods, manually or automatically.

The manual method is for home bakers or commercial bakers with small quantities which we shared earlier.

Simply put the bread on wire cooling racks after coming out of the oven, de-panning if required. Let air and the ambient temperature of the room remove moisture and lower the bread’s temperature.

The automatic method is for bakers who produce bread in huge quantities.

Here, a spiral cooling machine of conveyor belts takes the bread through cooling chambers, blowing cool, dry air onto the bread. The automatic method increases the rate moisture can escape, so speeds up the cooling process.

There is also a new technology for cooling bread called vacuum cooling.

It’s a rapid, more efficient alternative to ambient cooling. Vacuum cooling uses a pump that removes dry and humid air from the cooling environment to create a vacuum.

What happens if I cut sourdough bread too soon?

The urge to slice your sourdough right after baking is really tempting. But letting the bread cool down is one of the most important parts of the baking process.

Slicing it before it reaches body temperature will waste your hard work. Right after baking it, its texture is too moist, and the structure will not have settled. Slicing the bread when it hasn’t reached the right temperature yet will result in the following:

How long does sourdough bread take to cool?

Once you have your ideal process for cooling bread, let’s see how long to let sourdough bread cool down.

Bread varies its cooling period depending on its size and ingredients. An average sourdough of 1.5 lbs will take at least three hours to cool properly.

But if rye flour has been used, the cooling time will increase.  Rye flour retains more moisture, so it’s going to need more time to cool down. Denser bread, in general, will need a longer time to cool.

Can I leave bread in the oven to cool?

Many people say that you can leave bread in the oven to cool, but this is not a sensible idea, unless certain criteria is met!

Moisture in the bread is going to have a hard time escaping because the hot air around it creates pressure, making it harder to escape.

In most cases, take the bread out of the oven as soon as it is ready and cool it on a wire cooling rack. This allows the bread to cool quickly to create a crispier crust and also helps it to stay fresh.

If you are concerned that the oven temperature was too high and the bread is slightly underbaked in the centre, or you’re dealing with a high-hydration loaf, turn off the oven and open the oven door slightly. This method pulls moisture out of the bread really effectively. However, only do this for a maximum of ten minutes to avoid hampering the bulk of the cooling process.

Can I put bread in the freezer to cool down?

If you are desperate to cool your bread down, you may be tempted to use the freezer. I have tried this before, but no, I do not recommend that you try to cool bread in the freezer.

Here are the reasons why:

If you want to store bread in the freezer to extend its life wait for it to cool first.

Can I leave bread to cool for too long?

Technically, you can leave the sourdough bread to cool for a long time period. But if it sits at ambient temperature for too long, it will pass its optimum texture and moistness. For most sourdough bread, cooling for over eight hours will dry it out too much. It will also be difficult to slice as the crust will be harder.

How to slice your sourdough bread?

After all the long wait of letting your bread cool down to the right temperature, it’s now ready to be sliced. But don’t let your excitement ruin your hard work!

Slice your sourdough correctly by following these steps:

1 – Use the correct knife

A high-quality bread knife goes a long way toward making bread slicing nice and efficient. One should feature a long serrated slicing-edge so you can slice your bread with ease. Sharper is usually the better, but check my how to choose a knife to slice sourdough bread guide to find the best one for your budget.

Don’t force all your strength into slicing it. Let the knife do it for you. A common mistake is pushing the knife downwards, which puts pressure on the bread and produces ugly slices. Firmly hold the bread with one of your hands. Hold the knife parallel to the chopping board in your other hand, and use a forwards-backwards ‘sawing’ action alongside a gentle downward action. Don’t rush. Savour the moment of slicing!

Rather from the top, it would help if you were cutting the bread from its side. Bread is usually not as tall as it is wide, so there’s less bread to cut. This method is more straightforward and ensures thin and consistent slices that won’t be squished. Cutting a tough loaf from the side will allow you to slice the upper and lower crust simultaneously.

If you bake a lot of bread and have a hard time slicing it evenly, there are a few cheap tools that you can use. One is a simple bread-slicing guide. A guide keeps the knife positioned as you slice to make identical slices easier.

But if you’re planning to invest heavily in your tools and equipment and want to achieve perfect slices without much effort, an electric bread slicer might be for you. These are easy to operate, and you can adjust them depending on the thickness that you prefer.

We’ve covered why and how to cool sourdough bread. The same rules work for every other type of bread also. In a commercial bakery, a lot of time and money is invested in creating the perfect cooling environment for bread, so why not give it some attention at home?! If you have any questions, let me know in the comments below.