When Is The Best Time To Use A Sourdough Starter? 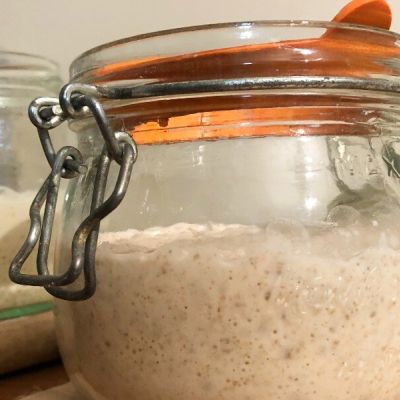 Is it right to use a starter when it’s pushed to its peak, or should we use it right after it’s been fed? Well, I had my theories, but after researching this topic I found some interesting revelations that make perfect sense! I’ve found the optimum time to use a starter and a little science around how the starters rise and fall. After reading this, you’ll know when is the best time to use a sourdough starter! Here’s the short answer:

For the maximum leavening activity, a starter should be used when it hits the peak of its rise. For a more acidic flavour, we should leave it at its peak for as long as possible before it collapses. A starter that’s collapsed is weak, so it’s always best for it to be under-ripe, then overripe.

What is the best time to use a starter for sourdough bread?

The optimum point to use a sourdough starter is when it has risen to its highest point. Otherwise known as the peak, the highest point of the rise should be reached 3-4 hours after being fed. Cooler temperatures and less vibrant starters can mean that they will take longer (up to 14 hours) to reach their summit. Once it reaches the top, the starter will stay there for 1-2 hours. After this, the starter will collapse.

Different flours and levels of bacteria, warmth and many other factors affect the rate at which a sourdough starter rises. There isn’t a guaranteed perfect time window for the best time to use a starter, you have to learn how to watch it.

How to tell if my starter is at its peak?

After it has been fed, check the starter every 60 minutes. If it has a thick consistency, expect to see large bubbles throughout the preferment, especially on the surface. A combination of large and small bubbles is good.

If you have a runny starter you’ll just see small bubbles. They should be plentiful and cover the surface of the starter when ripe.

A general theory is when it triples in size it is at its peak and ready to use. Yet, not all starters rise this high, and some rise more.

An accurate way to test if my sourdough starter is ready?

If you’re not confident in knowing when your starter is most active, we can use this test to tell us. It involves a bit of planning but is well worth it as you will learn so much and guarantee you’ll be using your starter at its most active point going forward.

Can I use my sourdough starter right after feeding?

Well, you can use a starter straight after feeding. But, it’s not the best idea. When feeding a starter you dilute the bacteria at first. As it feasts in the fresh flour the bacteria and yeasts multiply making it more and more powerful as it reaches its peak rise.

When to use a sourdough starter if it reaches its peak

Once the starter has reached the top it will slow down its production of yeast cells. This can be the perfect time to use your starter. However, as the starter is left at its peak Lactic Acid Bacteria continue to multiply. This increases the number of organic acid bacteria in the starter.

Leaving the starter at its peak for an hour or so can be wanted. It makes the starter more active and increases the number of acids which will flavour the sourdough bread. View how to make a sourdough starter more sour for more information.

What happens when a sourdough starter collapses

In a sourdough starter, simple sugars from the flour get broken down by bacteria and enzymes. This feeds the yeast and the Lactic Acid Bacteria in order to produce gas. When a sourdough starter starts to run out of sugars, gas production slows down. Though it won’t stop producing gas completely, the amount of gas produced slows so much that it matches the amount escaping so the starter sits at its peak for a short while.

After an hour or so, gas production lowers further, whilst the starving Lactic Acid Bacteria (LAB) start to eat the gluten network. The overall weight of the gas in the starter forces it to collapse.

What does a starter look like when it is collapsing?

When a starter is collapsing, expect to see signs that the starter was higher. These may include marks on the container and maybe some remnants of bubbles. The starter will usually drop from the sides first, the centre will follow later. If the sides are higher than the centre, it indicates that your starter is on the decline.

What should I do if my starter collapses?

When a starter collapses, it doesn’t completely die. It continues to multiply bacteria, however, the wrong types quickly begin to develop. This causes an imbalance in the ecosystem which weakens the leavening and conditioning power of the starter.

A short period in this state won’t cause much damage. However, if the starter has been left for several hours after collapsing it will need regular feedings to regain its previous leavening ability.

I hope you now know when is the best time to use a sourdough starter so you can make the best sourdough bread. I’ll leave you with some frequently asked questions, but if you want to know anything else leave a comment below.

My sourdough starter has collapsed, can I use it?
The longer a starter has collapsed, the weaker it will be. If it’s only just starting to drop from its peak then it will be fine to use, just expect a pronounced aroma of alcohol and acetic acid! If it collapsed many hours ago it is best to delay bead making until it has been refreshed and risen again.
How to speed up how long my starter takes to rise?
If you want your starter to rise quickly so you can make sourdough bread in a hurry, the best solution is to warm it up. Placing it at a temperature of around 33-36C will accelerate the growth of the sourdough bacteria and its yeasts. Add a small pinch of baker’s yeast to speed the starters rise further.
What if my sourdough starter does not rise at all?
Try warming it up, using filtered or bottled water, and a higher protein flour to see activity increase. If not, follow my sourdough starter troubleshooting guide for more ideas.