What Is The Best Temperature For Yeast? 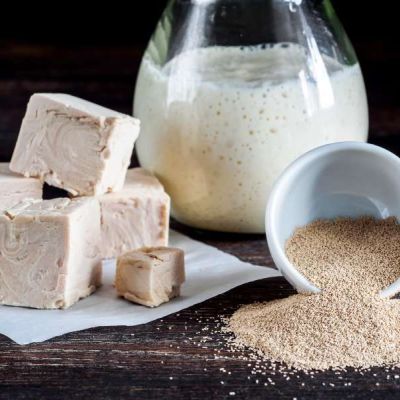 Yeast produces carbon dioxide in its respiration and fermentation processes which gets captured in the dough’s gluten structure, to make the dough rise. Temperature plays a key role in controlling the activity of the yeast. Not just when bread dough is proofing, but also when it is bloomed before adding to the remaining dough ingredients. So I wrote this article so you can know what is the best temperature for yeast during blooming and proofing.

Why is temperature important for yeast?

As with all living things, yeast needs food, water and warmth. If one of these is missing, the yeast remains dormant. During manufacturing, moisture is removed from the active yeast to produce active dried yeast. This is the most common yeast available in stores.

When making bread with active dried yeast, it needs to be bloomed in warm water and a pinch of sugar. Blooming lasts for around 10 minutes and provides the yeast with water, warmth, and food so that it can return to being an active culture.

There are thousands of yeast cells in each teaspoon of dried yeast. Blooming yeast correctly ensures that the majority of the cells are activated, therefore providing a more efficient rise. Bread dough is proofed at a cooler temperature.

What is the best temperature to activate yeast?

Blooming dry active yeast should be done in 100-115 degrees F (38-46C) water. Fresh yeast and instant dry yeast don’t need to be bloomed. When the dough is proofing, the best temperature for the yeast is between 77-100F (25-38C), yet there are benefits to using cooler proofing temperatures.

What temperature is best for proofing a yeast dough

Once the yeast is activated, it’s added to the flour with more water and the remaining ingredients. After this, the dough is mixed or kneaded. It’s important to use cooler water for the dough than what is used to bloom the yeast. Bread dough that’s too warm when kneading and proofing can create issues with the bread.

The ideal dough proofing temperature is between 77-100F (25-38C). For slow-proofed artisan-style bread, the temperature will be in the lower region of this range. Commercial bread producers will proof at higher temperatures, most likely 100F (38C). Cooler temperatures and refrigerators are often used to slow down yeast fermentation. This produces sweeter flavours from the breakdown of starch, an enhanced gluten matrix, and makes the duty of baking bread easier to fit in around a busy schedule.

Yeast will continue to operate at warmer temperatures. In fact, until it reaches 140F (60C) and dies, its rate of activity increases. Each increase of 1-degree celsius increases yeast activity by around 4%. To be fair to yeast, it is often held back by the enzymatic production of sugars at cool or high temperatures more than itself. Read the best temperature to proof bread to learn why.

What happens if the proofing temperature is too hot or cold?

If the dough is too warm, yeast operates too quickly. This makes carbon dioxide gas that’s produced leach out. The quick production of gas also produces water which, together with the excess gas, produces a sticky, gassy dough.

Gluten needs time to strengthen after kneading before it can be filled with gas. If the yeast attempts to fill pockets of gluten before they are defined, the gas will not be retained.

Running out of food

If the yeast consumes all the available sugars in the dough quickly, it may not be able to rise any further. It often leads to the dough collapsing just before or in the oven. The likelihood of this increases when the proofing stage is separated into two stages, and the dough rises too much during the first rise (bulk fermentation). As sugar supplies are consumed, there isn’t enough food to complete the second rise, and yeast activity drops.

Too cold for the enzymes

There is also an issue where the enzymes amylase and maltase, responsible for breaking down sugars, don’t operate well below 77F (25C). This will cause a reduction in the available sugars to supply the yeast cells. When proofing at cooler temperatures, sugar can be added to the dough to counteract this problem.

Takes too long to rise

A long rise produces more robust flavours in the dough. It also creates a more defined gluten structure. This is often preferred in bread such as sourdough, where light mixing and maximum flavour are desired. Yet, for light and fluffy bread, a long rise can be detrimental in its flavour and texture.

If bread takes too long to rise, it can lead to over proofing – where the proteins in the gluten structure are consumed by the fermentation process, or over-oxidation. This is where oxygen destroys the carotenoid pigments in the flour which are responsible for bread’s bready flavour and creamy colour.

What temperature is too cold for blooming yeast?

If the water used to bloom dry yeast is below 100F (38C), it causes problems. As the water is not hot enough, the yeast cells become lysed and produce glutathione which leaks from the cell walls. This amino acid makes the dough sticky and hard to handle.

A cooler temperature for proofing yeast can also mean that fewer yeast cells will be activated. Once added to the flour, the yeast proofing dough will take longer to rise. In the worst case, cold water near a temperature of -4F will not be able to bloom yeast, leaving it inactive.

How to proof dried yeast?

Add one packet (7 grams) of active dried yeast to a ½ cup of warm water (110-115F) and a teaspoon of sugar. Whisk to dissolve, and leave to sit for 10 minutes. By this time the frothy mixture should have doubled in size which means it is ready for making bread.

Should you proof instant yeast?

Instant yeast is made up of finer granules than active dried yeast. Because of this, it doesn’t require proofing with warm water before use. Instead of blooming, instant yeast can be mixed with flour and dry ingredients. Instant yeast is more potent than active dry yeast as it contains less water. It often contains ascorbic acid, a popular flour improver that upgrades the strength of the gluten.

If you are concerned that your instant yeast might have gone off, you can proof it in warm water to test. Bloom it the same way as proofing active dry yeast. This will “prove” that the yeast is active, and if victorious, bubbles will appear.

What is “yeast kill”?

Yeast kill is the term used for when the yeast is ultimately killed off. It’s a phrase used alongside “crust set” in thermal profiling, where commercial bakeries measure when the oven spring ends in the oven. Regardless of the type of yeast, it will start to die at a temperature of 130F – 132F. And when the temperature reaches 140F, the yeast will be killed entirely.

Can I bloom yeast quickly?
Proofing or blooming active dried yeast reactivates the yeast cells. Rushing the process means fewer yeast cells will be activated which means your bread will rise slower. Bloom your yeast for 10 minutes unless your packaging says otherwise.
What water temperature should I use for a bread maker?
In using most home bread machines, it’s best to use water or any liquid at a temperature of 80 F when using instant yeast. As breadmakers proof dough at high temperatures, yeast will have plenty of time to ferment.
Can I add active dried yeast to dough without blooming it?
Yes, but you will get a better rise if you bloom the yeast separately. The dough is likely to be too warm and rise too quickly. Blooming is being done to ensure that the yeast is active. Also, this process only takes a few minutes, so you should wait for it.
What happens if you let yeast proof too long?
As long as the yeast has food, it will continue to prove and multiply. But if you leave it for too long, it can end up tired, or worse, dead as it runs out of food. This will produce a dough that won’t rise all that well, especially if using two rises. The bread will likely be hard and dense.
How can I proof yeast without a thermometer?
While having a thermometer is the best way to proof your yeast, you can still do it without one. The wrist test method will help you out. Drizzle a few drops of water onto the inside of your wrist. It is suitable for yeast if it’s just above body temperature and feels slightly warm. If it’s too hot or too cold, adjust the temperature of the water.