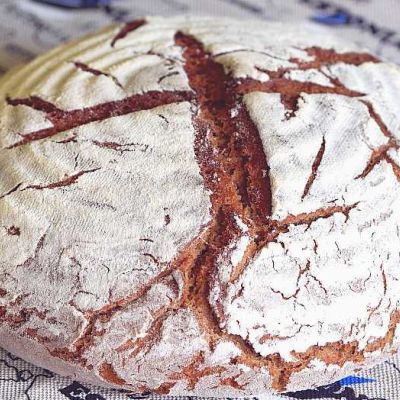 Artisan is a term thrown around by bakers and food producers, seemingly as a sign of excellence, but what is it? Well, I thought I knew, but after doing more research I’m even more confused! See, there are no regulations that determine artisan bread (outside of France), but there are some common traits which, in this artisan bread vs regular bread comparison, we’ll discuss the differences.

What is the difference between regular bread and artisan bread?

Flour, water, salt and yeast are the basis of artisan bread. Instead of using chemical improvers, artisan bakers make bread unique by changing the ingredients and techniques used. Additions can be added providing they are naturally produced, such as butter and eggs. Artisan bakers use long fermentation times to extract maximum flavour from their bread, compared to quick-rise recipes generally used in regular bread.

But, that’s an overview, let’s cover those points in detail:

The difference in production methods

The popular perception is that artisan bakers work in small groups (or alone), making everything by hand. Each loaf is prepared by hand kneading, dividing and fermenting each batch of dough in large trays. Once ready for the oven the dough is tipped out of bannetons and slid into the oven using a peel, until ready to be taken out. However, whilst an artisan baker should be competent in all of these manual skills, the use of machines to increase productivity in artisan baking has become increasingly common.

Industrial machinery that divides and shapes dough, often with conveyor belts is found in many regular bakeries. When these tasks are completed by hand, notably better results are produced, so you are unlikely to find these industrial bits of equipment in an artisan bakery. Regular bakeries will tend to prioritise economies of scale (quantity) whilst sacrificing a bit of quality, but there are many regular bakeries that choose not to.

Although there are no rules for what is artisan bread, many of the affiliated artisan certification groups such as the “Great Taste Award” expect good quality ingredients to be used to provide their award. You don’t need to grow your own wheat or even utilise local suppliers to be an artisan producer, but you should be using high-quality ingredients.

Many artisan bakers will work in partnership with artisan suppliers to promote each other to their audience. And, if the best product is truly being made, the best and freshest ingredients should be used.

Regular bread bakers aren’t fussy about the providence of ingredients. The reason for less interest is likely to be due to lowering costs or home bakers not having the confidence to do premium ingredients justice. There is also the issue of supply. Mass-produced bread requires large quantities of raw ingredients, which specialist mills cannot provide. This also affects supermarkets where smaller flour producers cannot produce the volume required for a national supply chain. The result is quality ingredients such as flour and butter are only available to home bakers and artisan bakers who search for them.

And, the ingredients that are not used!

The majority of commercially produced regular bread contains dough additives and improvers to enhance the dough. These are often supplied to bakers in pre-mix sachets or concentrates which are added to the dough mixer with the flour, water and yeast. These off-the-shelf dough improvers provide extra ingredients and enzymes to create different flavours and textures in their range of bread.

Artisan bakers rarely use ingredients that a home consumer is not familiar with, however, some do include ascorbic acid, lecithin, malt flour and calcium sorbate. As previously stated, there are no real rules for what is artisan. In many cases, if the baker believes a better quality product will be created they can justify any addition.

Artisan bread generally takes a lot longer to make than regular bread. Extended proofing times allow fermentation to occur, enhancing the bread’s flavour and texture. The most significant difference you’ll notice between artisan and regular bread is the depth of flavour. Artisan bread will have a fuller and more interesting flavour than its quickly made relation.

The amount of water in the dough

As artisan bread is largely handmade, more water can be included in the recipe. A slightly wet or sticky dough will likely get stuck in the conveyor belts found in commercial bread factories. Dryer doughs are preferred therefore in regular bread. Water supports the gluten to stretch, which enables a:

The skill of the baker

Regular bread making utilises many repetitive skills. When making artisan bread, the dough is more inconsistent. A less stable dough leads to bakers having to regularly make changes to their normal routine. Understanding how to read the dough and having an array of techniques up their sleeve to manipulate dough development are essential to artisan bakers. Commercial dough is more consistent so minimal changes are required to the process on a day-to-day basis.

Artisan bread takes longer than regular bread to produce, breaking down gluten and revealing more minerals. In terms of calories, protein and fat content there are no differences. When considering this, and the avoidance of additional additives, many consumers find artisan bread healthier and easier to digest than regular bread.

It’s crazy that there are no clear definitions or regulations for artisan bread. Anyone can call themselves an artisan producer if they wish! The problem with this is when bread is labelled as artisan, but not of superior quality. Ordinary bread buyers will begin to think artisan bread is a waste of money and destroy the artisan bread industry. France introduced bread laws where bread is categorised and labelled based on the ingredients used. You can see a list of what dough improvers can be used in French bread by clicking the link. Regulation for sourdough in the UK is being pushed by the Real Bread Campaign, with the ambition for sourdough bread to only be labelled as sourdough if it is leavened by a sourdough starter.

So, I’ve done my best to explain the difference between artisan and regular bread, and I hope you’ll be looking where to buy artisan bread in the future! I hope this article has answered your artisan bread vs regular bread questions. Let me know below in the comments if it has!

Is sourdough artisan bread?
Sourdough bread is traditionally made following artisan baking techniques. Some producers (small and large) use extra ingredients to accelerate the production process, which is not strictly artisan. If you see sourdough bread with only flour, water and salt on the label, it should be artisan-made.
Is artisan bread the same as white bread?
White bread can be made using slow fermentation techniques with an artisan approach. If it has a dark crust and an open crumb structure, it’s probably artisan made, but not all white bread is artisan. You’ll need to buy your bread from a specialist baker if you want artisan bread.
What is meant by artisan bread?
There is no regulated definition for artisan bread, but it is expected that artisan bread is a leavened flour-based product made with slow proofing and hand shaping techniques.