What Is Artisan Bread? 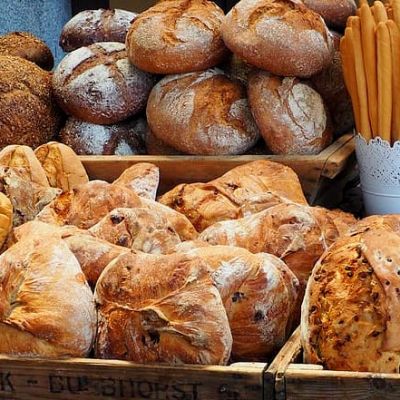 Artisan bread is made by skilled bakers using natural and high-quality ingredients. Bakers adjust the time, temperature and use hand-crafted techniques to make the perfect bread. Artisan bread is widely recognised as having a superior flavour and texture to commercially produced bread. The reduction of yeast used in artisan bread recipes plus the removal of other undesired additions creates health and flavour benefits. These benefits have driven growth in artisan products over recent years, despite their higher purchase cost.

The definition of artisan bread

While there is no governing body controlling what is and what is not artisan bread there is a general consensus on who can label food as artisan-produced, so I rolled out the dictionary to get a definite solution:

According to Dictionary.com the meaning of artisan is:

Artisan bread products are not the only type of artisan products available. There are many foods and non-food items that could be classed as artisanal.

What does Artisan mean in food?

Artisan made food is made using quality ingredients and methods that are best for the quality of the product. Classing a food as “artisan-made” declares a stamp of quality that the product is of the uppermost standards. The use of additives or improvers is usually replaced with natural ingredients and highly skilled methods of production.

Due to a large amount of manual effort and skill required to make artisan food, there are few mass-market producers. Artisan foods are expensive to produce in mass and due to being additive-free will have a shorter shelf life. As artisanal foods cost a high price to produce most are sold locally in farmers markets or delis.

How is artisan bread different from normal bread?

Artisan bread has more flavour and aroma than supermarket bread due to the extended fermentation time used. A long fermentation allows the dough to develop more organic acids and dough maturing properties than it otherwise would. These create more flavour and aid the gluten structure to create lighter and more enjoyable bread.

How to create different types of artisan bread?

Changing the dough’s ingredients or the techniques used to produce it such as the mixing time, shaping, water hydration, fermentation time or the temperature will change the behaviour of the dough. Different behaviours create personalised textures and flavours used to create unique bread types. A skilled baker is able to adapt a dough to make several variations of bread from the same batch of dough.

What is different in artisan bread production

The biggest difference in artisan bread production is the amount of time used to develop the dough. To allow for extended natural fermentation the dough must be kept at a lower temperature than non-artisan made bread. Other differences include;

What are the types of artisan bread?

Just about every recipe will have an artisan variation. Bread made with or without a pan or proofing basket can be considered artisan. The type of bread is not important in artisan classification, the ingredients selected and the methods used are what is evaluated for the term to be applied. Popular artisan bread types include:

Best consumed within a few hours of baking this iconic french bread is one of the most popular bread found worldwide. French bread law protects the integrity of the ingredients used to make baguettes. The invention of the steam oven and the post-war working restrictions imposed after the Second World War by the French government were perfectly timed for the baguette. A quick to make bread that can be enjoyed on any occasion led the baguette to popularity in Paris and was quickly adopted across the world. Be careful of bread that is described as “French Stick” or “French Bread” as these are not real baguettes!

Allowing time and temperature to develop the natural yeasts in the environment and raise the bread is not a new idea. The widespread use of commercial yeast nearly lost this artisan bread. The lactobacillus starter not only raises the bread, but it also matures the flour to create a dough that is easy to handle and packed full of flavour.

Sourdough bread can have a very distinctive, sour and tangy taste due to the lactic acid that is produced by the starter. Here’s my sourdough bread recipe for beginners to help you get started.

A fantastically unique bread that contains an open yet irregular crumb topped with a selection of Italian inspired toppings. The focaccia can be thin, or thick and can be sliced to make a sandwich or eaten on its own.

Rye bread is high in fibre and has an extremely strong flavour when compared to other flours. A lack of gluten in rye flour can often lead to dense, heavy bread. Combining rye and white flour is a common method that is used to make great tasting bread. The colour of the rye decides how dense or dark the bread will be.

Brioche has a rich texture due to containing copious amounts of butter and eggs. It is usually sweetened with sugar too. Brioche is eaten in France for breakfast or during the day with coffee. The most popular form is Brioche à Tête, yet brioche can be found in a loaf form too.

The literal meaning of the word Ciabatta is slipper which it derives its name from. An Italian white bread is used to make sandwiches, but can also be served with dinner. A properly made artisan ciabatta is hard to find outside of Italy.

Found throughout France and beyond, the Pain de Campagne can contain wholemeal and rye flour. The healthy flours are mixed with white and typically a rye sourdough is used as the levain. The Pain de Campagne is a beautiful artisan bread with many uses.

Spelt is an ancient grain that has gathered popularity in the past couple of decades due to its intense flavour and multiple health benefits. Like rye flour, spelt contains a low amount of gluten so is often mixed with white bread flour to make a light and airy bread.

Made with French or Italian flour, sundried tomatoes, dried red and green peppers and herbs such as oregano are used to create this delicious bread. The flavours of the Mediterranean are perfectly captured in this bread.

Food can be classed as artisan based on its production techniques and the quality of ingredients that are used. It could be expected that solely organic ingredients are used in artisan bread production but as there are no laws governing the use of “Artisan” therefore there is not a requirement for artisan ingredients to be organic. Despite it not being necessary, many artisan bakers use organic flours in their production to unleash the maximum amount of flavour.

How long does artisan bread last?

Artisan bread is 100% additive-free which improves the flavour and texture of the bread. Without additives, the bread stales faster as mould development can quickly accelerate. To counteract artisan bread staling quickly the baking time is often reduced and prefermented dough is used in the recipe as it contains anti-staling properties.

Artisan bread brings out the full flavour of the flour. “Proper bread” tastes more wholesome, rounded, and has a strong aromatic aroma. This is caused by extended fermentation of the dough and the basic high-quality ingredients used.

Home bakers sometimes discover that their artisan bread is hard to eat, but this can be avoided! Giving the bread a long time to prove whilst using steam in the oven when baking will help this issue. Steam when baking helps the oven spring and creates a loaf with a light, yet crispy crust.

Why is my artisan bread so dense?

Dense bread is caused by either a lack of gas or, gas retaining properties in the dough. The most common solution to dense bread is to knead for longer. Other reasons include; under proofing, over proofing, weak shaping and too much salt.

For a detailed list to help you troubleshoot dense bread, check out the why is my bread so dense post.

Where to buy artisan bread?

How to make artisan bread?