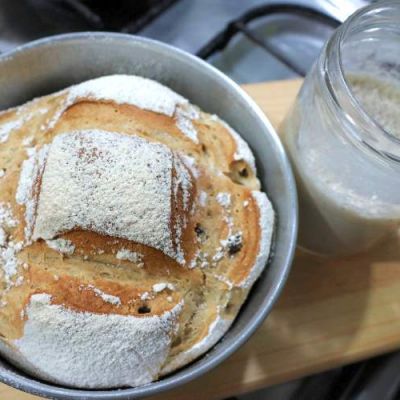 Is artisan bread the same as white bread?

Although there are no rules on what can and can’t be called artisan bread, it’s generally thought of as bread that has been made without additives, with quality ingredients by skilled bakers utilising slow-proofing methods. White bread can be artisan bread, it can also be commercial bread where the bread follows high-speed methods on a factory production line. Commercial bread often contains preservatives and dough improvers which are unfamiliar in a home kitchen.

Artisan bread vs commercial bread – which is healthiest?

Artisan bread is associated with being healthier than commercial white bread, this is due to fermented foods being good for our gut, fermentation breaking down the gluten and starch, and a lack of preservatives and additives.

Gluten is broken down in artisan bread

Due to the long-fermented methods most artisan bread recipes follow, gluten proteins reach their full potential and begin to break down. After baking, gluten is more digestible, making it more suitable for those with light gluten sensitivities.

No preservatives in artisan bread

Although there is nothing strictly wrong with eating the preservatives and additives found in commercial bread, they offer no benefits for our bodies and detract from bread’s natural ingredients. Additives are often added to bread dough to compensate for the shorter development times used in commercial bread or to be capable of running through bread plant machinery.

Fermented food is good for you

Longer fermented bread contains organic acids which disable the effectiveness of phytates which prevent nutrients and minerals from being fully absorbed in the body.

Because of the longer proofing times an artisan dough enjoys, more starch gets broken down into sugars which are consumed by yeast to make gas. When double-rising bread dough a large amount of gas is removed from the dough when shaping (degassing). During the final rise, more gas is produced to raise the bread meaning more sugars are consumed in artisan bread than in commercial bread. Fewer simple sugars will therefore enter the bloodstream soon after digesting, therefore a slower supply of complex sugars (starch and fibre) provides a slow release of energy as they take longer to be digested in our intestines.

It’s common for artisan bread to use flour containing more of the healthy part of the wheat berry, which is removed for “pure white bread”. As the bran and germ particles are a healthy source of fibre, flour that contains more of the whole grain is better for you.

Sourdough bread requires a slow proofing time, making it a type of bread that is usually artisan. A sourdough starter is a cultured mix of acid bacteria and wild yeasts which combined with a slow rise produce a healthy bread.