What is Nutritional Yeast And Does It Make Better Bread? 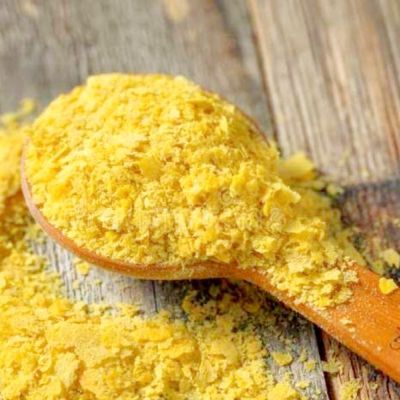 Have you ever come across this yellow-coloured yeast in the supermarket? That’s nutritional yeast! You may be wondering if it stands up to its name. Is it nutritional? Is it yeast? Well, to save you some time, yes, it has a lot of nutrients, and you can add them to a lot of recipes. But no, it won’t make bread rise, yet many vegans eat nutritional yeast regularly. So, what is nutritional yeast? Read on to find out.

Nutritional yeast is a type of yeast that’s been around for many years already. It’s often used by people who are on a plant-based diet because it provides various proteins,  vitamins, and minerals. It also contains antioxidants and shows a range of potential health benefits. Nutritional yeast also adds a pleasant nutty, cheesy flavour to cooked foods and baked goods.

What is in nutritional yeast?

Nutritional yeast is a deactivated form of the Saccharomyces cerevisiae microorganism. Of the hundreds of strains, this is the type of yeast commonly used in bread making and it’s grown on molasses and dextrose. The yeast cells are then deactivated during processing, making nutritional yeast an inactive levain.

Nutritional yeast comes in two forms: flakes and powder. Both are used interchangeably for various recipes. But powder is often preferred because it has a finer texture than flake form. The flakes look like fish food and are commonly sprinkled over popcorn. They can be found in the bulk section in large grocery stores and some health food stores.

The health benefits of nutritional yeast

Nutritional yeast is high in B vitamins. This helps to make red blood cells, aids your nervous system, and supports a healthy heart. It is also high in selenium, a powerful antioxidant. For those watching their waistlines, this one’s for you. A single tablespoon contains only 3 calories, hence the name, nutritional yeast!

Complete proteins. Nutritional yeast contains all nine essential amino acids required by humans. A tablespoon of nutritional yeast also provides 2 grams of protein. This can be an effective way for vegans to add high-quality protein to their meal plans.

Helps Prevent Vitamin B12 Deficiency. One tablespoon of nutritional yeast has 30–180% of the RDI for B-vitamins. It also contains high levels of thiamine, riboflavin, niacin, and vitamins B6&B12.

Contains Powerful Antioxidants. One tablespoon contains 2–30% of the RDI for trace minerals, such as zinc, selenium, manganese and molybdenum. Trace minerals are involved in gene regulation, metabolism, growth and immunity

May Boost Immunity. Nutritional yeast contains two main carbohydrates, alpha-mannan and beta-glucan. These have been shown to reduce the frequency of infection from pathogenic bacteria like E. coli and Salmonella.

Potential side effects of nutritional yeast

While nutritional yeast is generally healthy, there are still some drawbacks associated with it.

Given these drawbacks, is there anyone who shouldn’t take nutritional yeast?

Unless you have allergies, absolutely no. Nutritional yeast is safe for people of all ages, from babies to the elderly. Just introduce it to your body slowly by taking small quantities at first, and gradually increasing your portions.

Nutritional, baker’s and brewer’s yeast can all use the same species of yeast. Brewers may use different yeasts depending on the type of beer being made, but Saccharomyces cerevisiae is a popular solution.

Can nutritional yeast be added to bread?

Definitely! Nutritional yeast is deactivated, so it will not cause the dough or baked goods to rise. But despite that, it can add and boost flavours in them! It’s often used in nooch crackers, almond cornmeal bread, sourdough and bagels too!

There are many benefits to adding nutritional yeast, although it’s not suitable for every type of bread. Its flavour is powerful meaning you wouldn’t want to use it if you are after a light-tasting loaf. That said, the added depth of flavour and the nutritional benefits mean bread that includes nutritional yeast is a little bit special.

Is nutritional yeast gluten-free?
Yes! Nutritional yeast does not contain any gluten. It can be consumed by people with celiac disease or even by those who are on a gluten-free diet. It naturally doesn’t contain gluten, but there are a few brands that mix gluten in it. So always be mindful about it.