Should I Sift Flour For Bread? 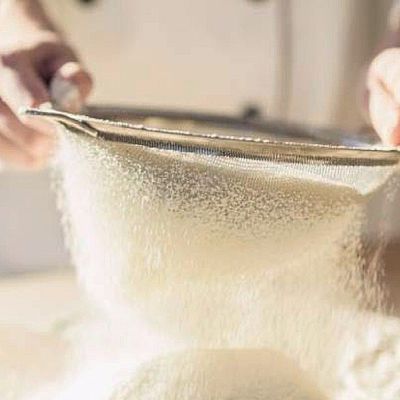 Sifting flour is a controversial topic in the practice of bread making. Many bakers believe that sifting makes a lighter and even texture, but my tests prove this claim not to be true. So, which side should you believe? Should you sift flour for bread? Scroll down to learn if you need to grab a sifter the next time you encounter a bread recipe that calls for sifted flour.

Sifting the flour won’t improve a loaf of bread, but you can use it to remove large grains in whole wheat flour or for accurate cup measurements. Sifting the flour separates, softens and incorporates air into the wheat. Any positive effect of sifting the flour is lost once the dough undergoes kneading as the air is pushed out.

Why does my bread recipe say to sift the flour?

Sifting flour is a common way to aerate and guarantee consistency between cup measurements. The weight of a cup of flour varies on how tightly the flour is packed in the bag.

If you are using a recipe that is measured in cups and requires the measurement of flour to be sifted then you should sift the flour!

It will break down any lumps and guarantee a more accurate measurement. But I don’t recommend that you use recipes that measure in cups anyway. A recipe that gives measurements in grams is the only route for anyone serious about bread baking. You can find the set of scales I recommend to measure flour for bread here.

When wheat milling wasn’t as advanced as today, flour was ground in inconsistent sizes. Sifting flour removes the larger particles that could make the baked goods densely textured. That’s why bakers from before do this to produce consistency in their recipes.

When should flour be sifted for bread?

Flour shouldn’t really be sifted when making bread. But there are some instances that might require you to do so. Some of them are listed below:

If your flour hasn’t been touched for a while. If your flour has been in your pantry for quite some time it might have some impurities that have fallen in, or in the worst case, bugs. Yes, it’s really gross, but it happens! The best tip to avoid this is to transfer your flour into airtight containers.

2) When using fine ingredients alongside the flour

If mixing other fine ingredients into the flour such as cocoa powder or cinnamon. Mixing sifted flour with other ingredients that are powder-like is best advised. It helps them to combine during mixing and produces a more evenly baked product.

If measuring in cups, sifting is a way to lighten flour that’s gotten packed down in a bag during storage and shipping. If you’re going to use flour that’s tightly packed, you first need to sift the flour before measuring it. Even if it’s the same measuring cup, 3 cups flour sifted is going to weigh lighter than 3 cups of unsifted flour.

4) To lighten the flour

In order to create a better rise and a lighter tasting bread, you can sift the bran out of whole wheat flour. Less-soluble bran interferes with gluten development and lowers possible expansion. This is a popular way to make wholemeal flour more functional for bread. Simply pass your flour through a fine-mesh strainer before it is weighed to catch and remove the larger pieces.

How do you sift flour?

The concept of flour sifting is to combine dry ingredients into a fine powder. It seems like an easy job because it really is.

The easiest way for flour to be sifted is through a strainer, often called a sieve. You must have a strainer that has very small holes or else the flour will go through the holes and not get sifted well. A fine mesh strainer would work best.

If you don’t have a strainer, you can also mix the flour with a fork or you can use a whisk. It won’t be as light as when you sift it, but it will break up any clumps and make your flour lighter.

Hold the handle of the strainer with one hand and tap it gently with the other. The flour will gradually come out. If you mix other dry ingredients, tap them through the strainer a few times to mix everything evenly. You can also help the flour through the sieve with help of a spoon.