Leavened Bread – What Is It? 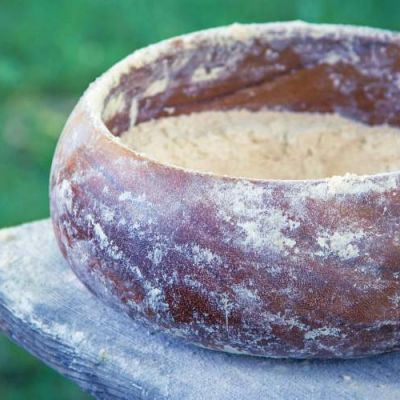 What is leavened bread?

A leaven is a product that’s added to a dough or batter to make it rise and cause fermentation. Using a leaven in bread means the bread will rise. Unleavened bread doesn’t use a raising agent and therefore does not rise.

Where does the word leaven come from?

Leaven has its roots in Latin from the word levāre, which means to raise. Later adopted in old French as the word levain which was adopted to the anglo-french language and recorded in 1300-1350 as levain/leven or levein. Levain remains the acceptable spelling in UK English but is spelt leaven in the US and many English-speaking countries.

What is a leaven?

A leaven releases gas into another product, which in the case of leavened bread is captured in the gluten structure, forcing it to rise. Gas is either created through a chemical reaction or captured via a mechanical intervention such as whisking or creaming. The type of gas is usually oxygen or carbon dioxide but is not strictly limited to these two. Hydrogen rockets are propelled by similar science as leavening bread.

Yeast is the most common leaven used in bread making, but there are plenty of others, with some occurring naturally, and others that require a chemical production process to produce.

Is leavened bread eaten during Passover?

During Passover and Eucharist, Jews and Christians respectively don’t consume leavened bread. This is to remember the Israelites who were forced to leave Egypt quickly before their impending slaughter by the Israelis. They did not have time for their bread to rise so Moses commanded that they prepare unleavened bread. As requested in Exodus 12:18 unleavened breads such as matzah are consumed during this period.