How To Keep Dough From Sticking To The Counter 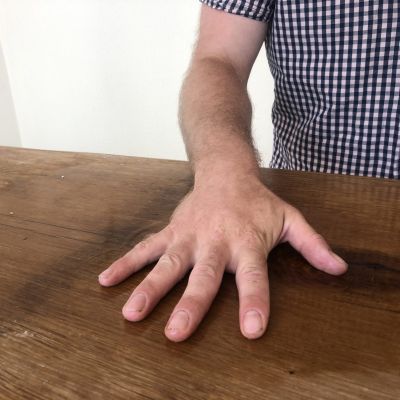 Many bakers use flour to stop their dough from sticking to the counter when kneading. But you might be aware that adding extra flour when kneading is not recommended by baking experts. The flour simply gets absorbed into the dough which alters the recipe’s ratio of flour to the other ingredients. This makes the dough dryer and, worst still, the less developed flour is bad news for a stretchy gluten structure. So what is the solution to prevent dough from getting stuck to the table?

Why should flour dusting be avoided when kneading?

Any flour absorbed by the dough midway through kneading will be less developed. It won’t be as moist as the original flour, nor will its gluten be as mechanically worked. Completely raw flour makes bread taste “dusty” and extremely bitter. It can also cause holes in the crumb which ruin the height of the rise. From underdeveloped to totally raw, we want to avoid these issues as much as possible by not adding flour later on in the process. Although, it’s especially tempting when kneading a sticky dough in hot conditions! See should I add flour when kneading for a more in-depth response.

Flour dusting in other stages

Dough sticking to the work surface is a reoccurring challenge in other stages of bread making. Bakers may be tempted to reach for the flour sack when they are about to stretch and fold, divide, shape and bench rest their dough. Whilst a light flour-dusting is perfectly acceptable in these stages, it is best to keep the risk of introducing raw and unfermented flour to the dough as low as possible.

See can I add extra flour to dough after it rises.

Introducing the oil slick to prevent dough from sticking

To avoid the issue of incorporating extra flour we can use a method called an oil slick. An oil slick is a way to put a thin barrier of oil between the dough and the table. This prevents the dough from sticking. It was introduced to me (and many other bakers) by Peter Reinhart in his “bakers bible”, The Bread Bakers Apprentice. A must-read for any bread baker!

To make an oil slick, pour a tablespoon of olive oil onto the work surface. Then spread it out to cover the working area with your hands.

Surfaces such as solid wood will absorb more oil than coated tables so may require more oil. There shouldn’t be visible puddles of oil, the layer should be thin, otherwise it will be absorbed into the dough. If you add too much, use some kitchen paper to soak up the excess. Here’s a video to show you to do it:

How to prevent dough from sticking to hands

We can also use oil to prevent the dough from sticking to our hands. Just drizzle a little on your hands and rub them together. It works great, although it can be a little tricky to wash off quickly when you have other doughs to attend to. To wash off the oil from your hands use a strong degreaser or washing up liquid with warm water.

Wetting hands with water before shaping or stretching is somtimes preferred as it doesn’t leave any residue.

When not to use an oil slick

There are 4 situations where an oil slick is not the best solution to keep dough from sticking to the counter:

Do I have to use olive oil to make an oil slick?

No, vegetable oil can also be used, alongside any other fat such as butter, or lard. A viscous fat is easier to spread and cheaper, so I advocate for using olive or vegetable oil. Commercial bread dividers use vegetable oil to prevent sticking.

We’ve covered how to prevent dough from sticking to the table and your hands in this article. Is there anything I’ve missed? If you’ve tried this method, how did you find it? Let me know in the comments below.