Can I Use Bread Flour To Make A Cake? 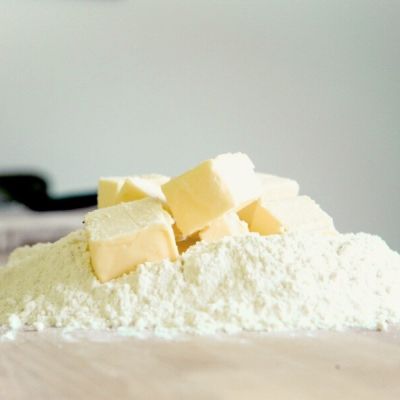 Using bread flour to make a cake will result in a chewy and dense product. Bread flour has a higher protein level compared to cake flour, so it’s going to produce more gluten. If you use it, the light and airy texture of a traditional cake will not be present without adding yeast.

What is the difference between bread flour and cake flour?

All-purpose or AP flour is the most versatile type of flour. This is mainly because its protein content is in the middle range amongst others. Other types of flour are either higher or lower than its level.

Bread flour and cake flour mainly differ in their protein content. Proteins (glutenin and gliadin) develop gluten when it’s been mixed with water. The higher the protein content, the more gluten it’s going to produce.

Bread flour contains about 11-15% protein content, one of the highest among all types of flour. It makes it more suitable for baked goods that require more structure.

On the other hand, cake flour is on the other side which has the lowest protein content among any type of flour. It has around 7-9% protein content, which makes it suitable for baked goods that are light and airy.

Bread flours are made with hard wheat, while cake flour is made with soft wheat. Soft wheat has a lower protein content than hard wheat. That’s why it can produce cakes that have a lighter texture compared to bread.

Another difference is the fineness of the mill. Cake flour is milled finer compared to bread flour. The finer mill makes it easier for the flour to incorporate with the wet ingredients.

What will happen if I use bread flour to make cake?

Even if bread flour seems not a great fit for making cake, you can still use it. It doesn’t really mean that you would not produce a cake if you used it. It’s just that the texture and a bit of the taste are going to be different.

Using bread flour will have an end product that’s not as soft as what’s expected of cake-like treats. It will also be more dense and chewy. It’s not necessarily a bad thing, it all depends on what end product you want to achieve.

Using bread flour in an attempt to make a cake is simply going to be an experiment. You might end up with something that you wouldn’t even recognize as a cake or some sort of baked good. That said, it might turn out great!

Can I turn bread flour into cake flour

If you don’t really have a choice, bread flour can be a substitute for cake flour with the help of cornstarch. The protein content of the bread flour goes through a process of ‘diluting’ when cornstarch is added to it. It will result in less gluten development and a lighter cake that’s closer to cake flour or pastry flour.

Use the ratio of 1 cup of bread flour to 3 tbsp of cornstarch to make all-purpose flour.

The process is pretty simple. Mix the flour and cornstarch together in a bowl. Once mixed, pass through a fine-mesh strainer once or twice so all lumps are gone before making your dough. Mixing it is key: you must not overmix it to avoid building up too much gluten that will become chewy when baked.