Brioche vs Croissant – What’s The Difference? 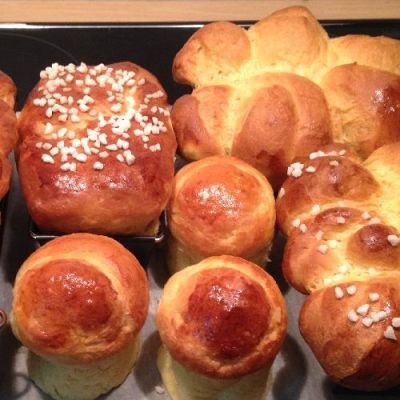 Brioche and croissants are two of the most acclaimed bread in the world. Both have a long history of praise for their buttery and delicate goodness. Both are French (though the croissant is actually from Viennese bakers!), and both can contain eggs. Despite the similarities, there are big differences in a brioche vs croissant comparison. If you want to know what they are, let’s go!

While both almost have the same ingredients, croissant differs from brioche in how the dough is rolled and covered with a sheet of butter. The dough is folded several times to form layers of pastry and fat. It is then cut and rolled into a crescent shape before proofing and baking with egg wash. Brioche is a versatile bread that includes the same ingredients in its dough, producing a soft, rich bread.

How is brioche made?

Brioche is a delicious sweet bread that is comparable to the texture of a cake. It’s made with flour, yeast, salt, eggs, sugar, milk, and butter. As the dough can be sticky and hard to handle, it is often prepared the day before. After it is mixed and left to bulk ferment on the worktop, it’s then placed in the fridge overnight. Once the dough is cool, it is divided and shaped into its final design.

Back in the day, there were two main types of brioche dough, poor man’s and rich man’s brioche. They differ by the amount of butter added to a recipe. Of course, the elite was always served heavily-buttered brioche (85%), while the lower class were served the ones with less (60%) butter! As years went by, “middle class” brioche became available too!

Today, a lot of the brioche eaten outside of France fails to contain nearly enough butter to be classed as brioche. Calling them enriched loaves or rolls might be accurate!

A classic serving of brioche is a small, round roll baked in a fluted dish with a tiny head on top. It’s also often sprinkled with pearl sugar which gives a sweet crunch. This type is called brioche à tête, but there’s more!

A dry brioche that’s proofed and baked in a fluted tin. The brioche à tête is the classic design for a brioche that takes skill and elegance to prepare.

This is an enriched bread that uses blossom orange water and lemon. Traditionally served at Easter.

The “bread of Jesus” gets its nickname due to its shape reminiscent of a swaddled baby. A soft brioche, similar to the Brioscia Siciliano from Italy. Cougnou can be filled with chocolate chips or raisins.

A braided loaf that’s adapted across the world. The original brioche vendéenne has a light texture and alcohol, vanilla, orange, and butter aromas.

A traditional brioche that’s sold in an oval shape with an irregular top. This classic brioche originates from Normandy and contains crème fraîche.

This bread uses a traditional brioche recipe. The dough is divided into balls and placed into a bread tin. As the loaf proves, the balls connect to each other to make the ultimate tear-and-share bread.

The Italian version of brioche is often sweetened with honey. It’s a soft brioche shaped using the brioche à tête method, yet proofed on a flat baking sheet. The perfect brioche for an ice cream sandwich!

The pink praline-crusted French brioche was invented in 1880 by pastry chef Pierre Labully at his family-owned pâtisserie. It is a leavened base of brioche that has been enriched with crushed sugar-coated nuts associated with Lyon, France.

Gâche vendéenne is a pastry product from the French region of Vendée that’s oval in shape and has a delicate golden crust. It always has to be sold fresh and whole, never sliced. The flavour is milky, but it also includes aromas of butter and vanilla as well as undertones of orange flavours. Originally made on festive days such as Easter or weddings.

The classic French brioche bread is made with a buttery dough and shaped in braids. Its name even means “braided”. The origin of the bread closely relates to Lorraine, France’s eastern part where Metz city lies. Chill before serving with a meal.

How is a croissant made?

The dough is then cut into triangles and rolled up into a croissant shape. The pieces are then left to proof on a baking sheet and glazed with egg wash before baking.

A croissant is a breakfast pastry usually accompanied by “un café” (coffee) in French bakeries. It’s registered as a product of special interest in France, although it is a pastry from Vienna.

It is made with the same pastry dough as pain au raisin, pain au chocolate and Palmier. This group of pastries become know as viennoiserie across France.

Because of this pastry’s flaky texture, some people slice it to make sandwiches filled with ham and cheese. A simple croissant can be eaten alone or with butter.

Cornetto is the Italian version of a croissant. While croissant is a French translation of crescent, cornetto is Italian for “little horn”. A cornetto contains less butter than a croissant and more sugar. A cornetto is softer, whilst a croissant has flaky pastry. Occasionally a cornetto is called a “brioche croissant”, but the thought of calling it this makes many artisan bakers feel a little bit sick.

The “cornetto vuoto” (an empty cornetto) is without a filling. A cornetto ripieni is filled and more popular. Common fillings include marmalade, honey, pastry cream and Nutella.

An almond croissant is often a day-old croissant that’s been sliced and brushed with an almond glaze, and then almond cream is sandwiched between the slices. It’s a great way to lower food waste however, many bakers will make a special almond croissant from scratch. The top is often sprinkled with sliced almonds and icing sugar.

As its name suggests, a sourdough croissant is made with a sourdough starter levain. It gives the croissant a more exciting and complex flavour. Definitely worth a try!

Margarine croissants are popular in the US. They have a curved shape, like a crescent moon. They are cheaper than traditional French croissants but (depending on who you speak to) just as nice.

Frozen croissants are the perfect choice for supermarkets or small shops where they don’t have the skill to make them. It’s a ready-to-bake croissant. All you need to do is lay them on a tray and bake them.

Which is better, brioche or croissant?

If you’re judging it from a baker’s perspective, brioche is much easier to make than a croissant. Making croissants takes more skill to perfect.

But from a consumer’s perspective, the difference between the two is their texture and crumb. A croissant is buttery with a flaky crumb, while a brioche is more bread-like and soft.

Served plain with no toppings, a croissant is best for those who prefer a more buttery pastry snack. While the brioche is perfect for those, who want that sweet bread with a cake-like texture. Whether you prefer one over the other, it’s totally up to your taste. Both are really great!

If you still can’t decide between the two, you can combine both of them by making a brioche croissant! It’s still a laminated croissant made with a soft bread-like brioche texture. If you’re keen on learning about that, leave a comment below so I can explain how it’s done!