Best Bread For A Panini | Popular Types For Panini Compared 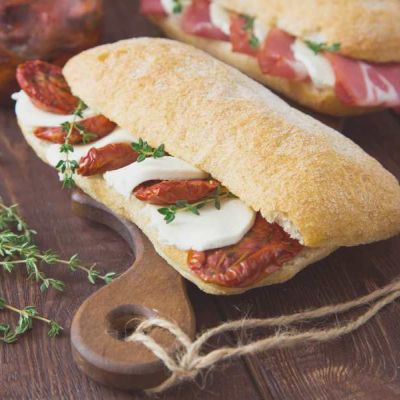 A lot of people always argue that there’s no specific ‘best bread’ that everyone would agree on. While I also believe in this, it’s a bit different in the case of Italian panini bread. If you want to find out what’s the best bread for a panini, let’s discover it together!

What is a panini sandwich?

A panini is a toasted sandwich made using a special panini press. A panini press compresses the sandwich by applying weight alongside heat from the top and bottom. Slices of bread are filled with meats, cheeses and/or vegetables. As the heat of the panini press transfers through the sandwich, the fillings become warm and the outside edges of the bread become crusty. Cheese is often used as a filling as it melts in the heat to become gooey and delicious!

What is the best bread for a panini?

The bread used for a panini should be dense but lack moisture. This helps heat conduct through the slices and warm the filling whilst allowing the bread to crispen up. The thickness, moistness and compactness of the bread are all important, as is the heat used in the cooking process. This is due to the main goal when making a panini being to warm the filling sufficiently whilst not burning the outside.

Ciabatta, the perfect bread to make a panini!

Everyone has their own preference, but ciabatta bread is considered the best bread to use for a panini. It has a flat shape and a large surface area, which makes it possible to stuff both wet and dry fillings. It’s also dense enough to withstand the immense heat and pressure of a panini press.

Other types of bread to make panini:

While you can use almost any type of bread for it, some are just more well-suited in making a panini. Besides ciabatta, here are some other types of bread that are also great to use in a panini:

Focaccia has its own interesting flavour, that’s why it’s also a popular choice to make a good panini. This bread is sturdy enough to withstand the weight and heat of a heavy sandwich. Even with the moisture of other wet ingredients, it won’t become soggy. Use an ingredient topped focaccia to make a panini if you want your sandwich to be more exciting, just beware of creating unsavoury flavour combinations!

A baguette is a thin and long bread that’s made from a basic lean dough. This bread is sturdy and doesn’t have the tendency to become soggy when filled with wet fillings. Unlike a Focaccia, a baguette has a more neutral flavour. So if you just want to highlight the filling of your panini and you like a crispy crust, a baguette is the way to go.

Even under the immense pressure of a panini press or on the grill, a flatbread won’t fall apart easily. It has a thinner crust compared to traditional bread which makes it perfect for hot sandwiches. Its crisp cracker-like texture also adds an interesting element to your panini sandwich.

These are those long flat rolls that are called “panini bread” or “panini rolls”. You won’t find them in Italy, the home of panini. Dense and stodgy, they make a toasted sandwich that many of us would class as panini, but it’s not really an authentic panini. Bland, flavourless and boring, these panini bread’s are pah, just not as exciting as the other options in this list.

Pita is another flatbread, it’s yeast-leavened with a round shape. Because of its softness, pita is a little bit thinner than traditional bread. This type of bread has a pocket inside it that can be filled with various ingredients. Pita is a more popular choice in making Mediterranean-influenced sandwiches but can be used as an alternative bread for a panini sandwich.

Multigrain bread is prepared with various types of grains, nuts, and seeds. Aside from its earthy flavour, it’s also considered a healthy bread because of its high fibre content. Of course, this is a great choice in making a healthy-type panini that’s filled with a lot of veggies.

Sourdough is a classic bread, but it’s also very versatile. From savoury and hearty meats to a classic grilled cheese, it can be used for both wet and dry fillings. It’s known for its distinct slight tangy flavour, and it also has a soft texture with a chewy centre and crunchy crust. Sourdough bread can pair with and even elevate the taste of various sandwiches.

Rye bread isn’t the most popular type of bread when it comes to making a panini. But this bread is versatile enough to be used in various recipes. Rye bread is also dense, which makes it sturdy and less prone to becoming soggy when wet ingredients are used inside the sandwich. This is great to pair up with Italian meats and other savoury and acidic ingredients. The same thing goes with other artisan slices of bread.

What is the importance of bread in a panini?

When making a sandwich, you can use any type of bread that you want, but, it’s not the case for panini. Making a panini involves heat and pressure, so the bread that you’re going to use in it should be able to withstand it. That’s why it’s always better to stick with a dense bread. This will also help in highlighting the flavours and textures of your sandwich filling!

What bread should you avoid in making a panini?

While you have the liberty to choose which bread will be great in your panini, some types of bread just won’t work. Here are some that you should avoid:

With the controversial ‘nutrition’ aside, white bread, most especially processed and pre-sliced, is always a no-go when it comes to a panini. This type of bread is light and airy, which is not suitable for handling the pressure of a panini press. White bread also lacks in flavour and can easily become soggy when filled with wet ingredients. Its crust won’t also crisp up, as it has a high tendency to just break and fall off.

Bagel is another bad option. Even though it has a tough crust, it can prevent the heat of the press from penetrating inside. It will be too thick to make a crunchy crust, which is another reason to avoid when making panini.

Again, denser types of bread will always work great when making a panini. But if its crust has a toughness similar to a bagel, it won’t work out.

What is the best panini press?

There are various panini presses and grills in the market today that can suit your preference, usage, and budget. In general, you want one that’s heavy so that it can flatten the bread and conduct heat into the centre of the sandwich. You also want one that’s quick and efficient at distributing heat. For home use especially, you probably don’t want to be waiting 15-20 minutes for your panini press to warm up. The panini press that does all this the best is the Dyna-Living Panini Press. It’s a workhorse that won’t disappoint you!

Best panini press on a budget

If you’re on a budget, I recommend this panini press grill from OSTBA. It’s under $50 at the time I write this too! It’s a versatile grill that you can use not just for panini, but for other food as well. This has a sleek stainless steel exterior and non-stick plates, which makes it easy to clean and use. It also has intelligent temperature control with a range from 120-428°F so you can get the best taste out of all your food!

You won’t have to worry about burning or undercooking anymore! This panini press has 2 LED indicators, the red light is when the power is on, and the green light is when it’s heating up already. Once it reaches the temperature that you set, the green light will automatically turn off. To top it all up, this is just a compact size, so it’s easy to store and bring to wherever you want to cook.

How hot should you cook a panini?

The hotness of your panini press will depend on what type of sandwich you’re making. If you’re making a thin panini with just a simple grilled cheese, a medium-high temperature of about 350-375F for 3 minutes would work great. This is because you just want to crisp up your bread and melt the cheese inside.

While if you’re making a heavier sandwich with fillings that need to be heated, put it for about 5-10 minutes on a lower heat. This will help the filling to cook through without over toasting your bread. But whatever sandwich you’re making, it’s always a good idea to check periodically so you can avoid under or overcooking it.

Ending thoughts on the best bread for panini

We’ve covered the best bread to make a panini. How did my favourites match with your experience? Is there one that you will try next? Let me know in the comments below!

Can you use regular bread in a panini press?
Most types of bread can be used in making a panini. You can always choose which bread should go with your sandwich. But a regular processed and pre-sliced white bread is not well-suited for a panini press. Because of its lightness and airiness, it won’t crisp well while being pressed. That’s why it’s always better to choose a slightly denser bread when making a panini.
Do you butter the bread for a panini?
You can live without doing it, but adding butter to your bread will help to enhance its taste and crispness. It will make your experience better, as you can feel the crunchiness with almost every bite. Adding butter will also prevent your bread from getting soggy while adding other ingredients to it.
Should you add salad to a panini before cooking?
If you’re going to use thin bread with your panini, it would be better that you add your salad or other watery ingredients after cooking. It will prevent your sandwich from being wet and soggy. While if your bread is dense and thick enough, you may try to add your salad before cooking.