Is It Really Safe To Eat Over-Proofed Bread? 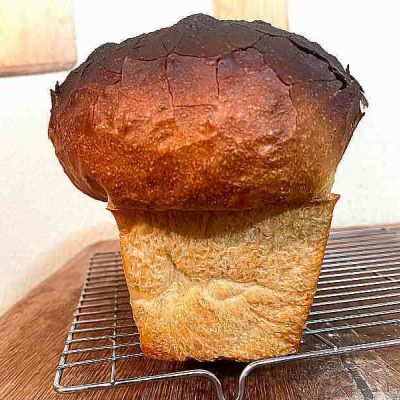 After slicing the loaf that I had made earlier this morning, I did my usual geeky inspection; The texture was nice, the crumb was a little too open, the crust was Ok but a little thick, and then, I took a smell…. arghhh it reeked of beer!

The reason for the alcoholic smell was due to over-proofing the dough. The bread had shot up whilst I was distracted and should have gone into the oven sooner than it did!

Do not panic! In this article, we will discuss if over-proofed bread can be eaten or not, as well as what you can do to prevent bread dough from over proofing.

What happens if you let bread rise too much?

If you let the bread rise too much, the yeast will produce more ethanol (alcohol) alongside the carbon dioxide. As dough over-proofs, an excess of sugars (broken down from starch in the flour) builds up, creating an unsuitable environment for aerobic respiration. The yeast instead respires anaerobically which leads to fermentation and the production of alcohol.

It’s called the crabtree effect if you want to learn more about it and it leads to the alcoholic content increasing in the bread. Most of the alcohol evaporates during the baking process, but some will remain. A baked loaf of bread typically contains around 0.4-2% alcohol. If the bread was over-proofed this figure can rise and will taste more alcoholic, but it’s not strong enough to get drunk from!

What can also happen when bread over proofs is that the dough collapses. This is due to a combination of, the gluten weakening, the dough getting heavy as it fills with gas and lactic bacteria consuming the gluten. If it doesn’t get baked before it reaches this point, you’ll end up with a very dense loaf on your hands!

But there’s no need to worry – over-proofing is a pretty common mistake, and even if your bread doesn’t rise quite as much as you’d hoped, it’ll still be edible. Just make sure you bake it for a little longer than usual to compensate.

What if my bread is really over-proofed, should I chuck it?

Should you throw out all of your over-proofed bread? Not necessarily. There are a few ways you can salvage it. For example, if the dough is still wet and sticky, you can fry it up as pancakes or French toast. Or, if it’s more dry and firm, you can turn it into bread crumbs or croutons. And, don’t forget about the classic grilled cheese sandwich – over-proofed bread makes for a perfectly gooey, delicious grilled cheese.

Overproofed bread isn’t necessarily unpleasant – it will just be a little more dense and chewy than average. So if you’re not too fussy, go ahead and eat it! But if you’re looking for a perfect loaf of bread, it’s best to start over with a new batch. You can utilise a portion of the dough in the next batch by adding around 10-20% of the old dough to the fresh dough. This will add maturity to the dough and should make better bread!

As you can see in this picture, overproof bread rises above the container it is baked in. The dough has started to collapse on itself and is very flat. This will change after baking, but right now, it doesn’t look great! When your dough is proofing correctly during the bulk rise or final proof, it should double in size but not rise above the top of your container.

How to prevent over-proofed bread?

There are several ways to prevent over-proofed bread, the best method is to use a timer. A simple timer like this one is such a vital tool to remove the guesswork from baking bread. Set an alarm to go off 30 minutes before you expect your dough to be ready. This way you can check things haven’t happened quicker than expected. If the dough is not ready, set further alarms at shorter intervals to remind you to check up on your dough.

Another issue you may encounter is while waiting for the oven to preheat the bread over-proofs. If this ever happens, or you feel it might, cover the dough and pop it in the fridge. The cool temperature will slow down the activity of the yeast giving you a longer window for the oven to be ready. You can always proof it on the counter for a few minutes afterwards if you slow the rise too much.

So is it safe to eat over-proofed bread? Yes, but it may not be as delicious as usual. I hope this post has calmed your worries and you know what to do if your bread over-proofs, and what to do to prevent it from over-proofing in the first place! Don’t forget a failed loaf isn’t a failure, it’s a learning process! Let me know what you think in the comments below.