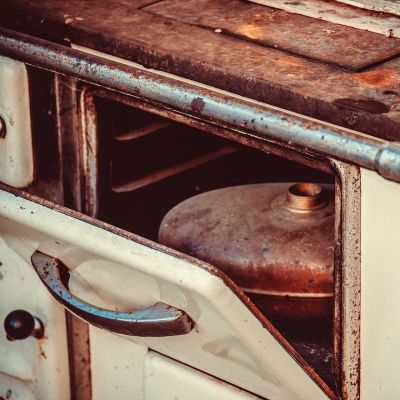 Whether a complete malfunction or a frustrating tweak, we all encounter an electric oven problem occasionally. Knowing what causes simple oven faults and how to fix them will maximise the quality of your bake and save you a bit of money.  If you are specifically suffering from bread baking oven issues like loss of steam, or unevenly baked bread, I’ve got some tips on the baking bread in a home oven post. Otherwise, let’s see if we can fix your oven problem here.

Why is my oven not heating up enough?

Is the light or fan working but no heat? If so, we can probably fix it. But if there is no sign of life it’s probably due to the electrics, so a professional should deal with it.

No heat coming from an oven element

If your oven is warming up, but very slowly it’s an issue with one of the elements. Most home ovens have elements at the top and bottom of the oven. They are sometimes called the “Bake” and “Broil”. Larger ovens also have an element along the back wall.

Try switching the heat setting on the oven to determine which element is broken. Once you’ve found which one isn’t heating, you’ll have to replace it. If neither oven element heats, the problem is probably caused by the temperature sensor.

Can I replace an element myself?

Elements are relatively easy to replace, providing they are exposed. Some designs place the element outside the oven chamber which can be a bit fiddly to get into. Search for the oven model on YouTube and you should find a guide on how to do it. When opening up the oven, wear gloves to protect yourself from sharp edges!

The lights are on but no heat is coming from the oven?

A faulty oven temperature sensor can output incorrect temperatures which can prevent the oven from powering up. A modern electric oven will display an error code if there’s a problem, basic models require a physical diagnosis. A multimeter can be used if you know how to use one. The resistance should rise as the temperature of the oven increases. Repairing and replacing a temperature sensor can be done yourself but it is quite hard so is best done by a professional.

If you discover your oven’s operating at a temperature that’s higher or lower than the one set, it’s probably a faulty thermostat or temperature sensor that’s causing it. Re-calibrating the thermostat usually fixes the problem – providing the temperature difference is less than 30C (50F).  When a larger discrepancy is noted, replace the thermostat as well as the heat sensor as both will have suffered excessive damage.

Electric ovens are controlled by a thermostat which turns the heat on or off. A delay between the sensor alerting the thermostat with the latest oven temperature reading causes a fluctuation in the temperature of the oven. It’s common for an oven to be as much as 30 degrees above or below the desired temperature!

Oven temperature off by 50 degrees?!!

Oven takes too long to heat up

When baking bread with a baking stone allow plenty of time for the stone to fully warm. Place the stone in the cold oven and after the thermostat light indicates the oven is up to temperature, give it another 30-60 minutes. Thicker stones can take even longer!

The temperature of the baking stone can be reported using an infa-red thermometer.

If you notice a drop in the performance of your oven, check the elements are heating correctly. You may have to replace one that is faulty or fix some loose fittings.

Smoke is coming from the oven!!

Food and grime stuck to the sides of the oven can get hot and start smoking. The solution is to turn it off and let the oven cool down. Once cool you’ll need to clean it. I’ve had great success with oven cleaners and now that I’m in my thirties a clean oven is more enjoyable than a night out. Here’s a cleaner that’s worked for me:

There is more we could mention such as broken fans, blocking air vents and control panels, but I’d rather keep this a simple guide to fixing oven temperature problems. If you think your issue is more complicated it’s best to not tackle it yourself.