What is the Difference between Naan and Pita 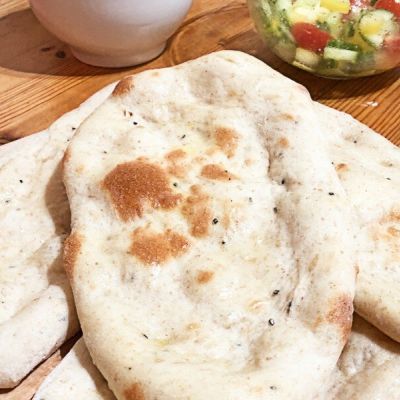 From the ancient Egyptians to modern times, naan and pita flatbreads have been a key source of carbohydrates. Pita bread dates back more than 6000 years! Both of these traditional types of bread have evolved into new styles. These include pizzas and chapatis that keep people coming back for more. So what is the difference between naan and pita?

Naan vs pita: what are the differences?

Naan’s origin is India, and it’s common in South and West Asia, as well as the Caribbean. Pita originated in the Middle East, yet is popular in Eastern Mediterranean countries.

These two flatbreads, naan and pita are sometimes mistaken, but they’re very different! Naan is thicker and more enriched making it softer. Pitas are a leaner flatbread that is ideal for stuffing with salads, falafel or kebab meat.

How are naans and pitas different?

The ingredients that go into the making of naan are:

Often eggs, onion (nigella) seeds and Indian spices such as cumin are also included. After baking the naan is usually brushed with ghee. It’s common for the flavour of naan bread to be enhanced with extra ingredients. Common combinations are:

Pita has way fewer ingredients in it. They consist of whole and white wheat flour, water, yeast and salt. Some producers include sugar and vegetable oil for flavour and to improve its shelf life.

Naan flatbread has a teardrop or oval shape. They are around 1-2 cm thick and have uneven pockets on the surface.

A Pita flatbread is more uniform. Its shape is more rounded, and when cut through the middle will open out into a pouch.

Both recipes are made using the same routine. They are mixed, kneaded and then left to rest for an hour or so. After the first rise, they are divided into dough balls. The pitas will be flattened whereas naans will be left in ball shapes. After 30 minutes (or longer if left in the fridge), the bread is baked.

Naan is best cooked in a traditional clay or metal oven known as a tandoor. They originate from ancient Egyptian ovens. A tandoor will heat up around 480 degrees! The oven door is open so the baker slaps the round ball to the wall of the tandoor.

It can also be cooked at home using an iron skillet or a preheated baking stone placed under the grill.

When it comes to cooking Pita flatbread, a hot oven is used. They are baked at high temperatures for just a few minutes. This makes the dough pieces puff up. Once a slight browning appears on the crust the pitas are removed. As they cool they collapse into the flatbread we see in our stores.

What is the difference between naan and pita in taste?

The addition of yoghurt, sugar and fat give naan bread a soft and more fluffy texture. Baking at high heat for a short amount of time gives a soft crumb with a crust that’s caramelized. Naan bread has more flavour as in most cases spices or extra flavourings are added.

This could be, because pita has been around a lot longer than naan, and that may explain the reason for the basic ingredients to it.

Pita has a dryer texture to it. The purpose of pita bread is to hold the fillings and soak up the juice. Pita bread is stronger but doesn’t really have a crumb. It is just crust on both sides with a hollow centre. They make a dish complete but are not particularly exciting on their own.

Which is easiest to make between naan and pita?

Pita bread tends to be easier to make because it uses fewer ingredients. The cooking method doesn’t require a special oven making the pita much easier to make.

What food to serve with naan bread

Naan bread is usually eaten as an accompaniment to curry. They also make a great mid-meal snack on their own. Although mainly found in India and Pakistan, it is likely to see naan bread with other cuisines.

What food to eat with pita bread

These can be filled with your preferred choice of sandwich ingredients or fillings. Or:

What is healthier, Naan or Pita Bread?

When it comes to which one is healthier, it’s a no brainer. Considering the ingredients that can go into the making of naan, pita is way healthier than naan. It’s lower in sugars, and it also has less fat, whereas naan is high in both fat and calories.

Naan vs Pita. Which one do I prefer?

It’s a difficult one but I prefer naan bread to pita. They go great with two of my favourite dishes, kebab and Tarka dhal. Delicious! I still like pita, but a naan offers just that little bit more. What is your favourite?