Can You Eat Bread After The Expiration Date? 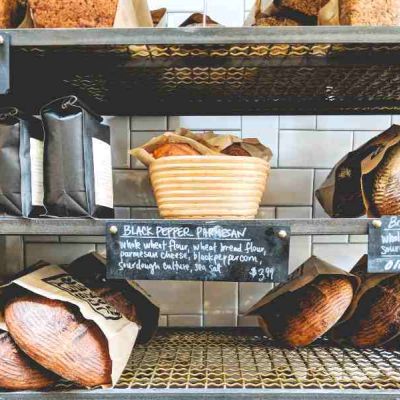 You may be wondering whether you can eat bread after the expiration date? Yes, you can, as long as there is no mould on it. Bread can be kept fresh for as long as possible when you know how to store it properly to increase its shelf life.

Different factors will influence how long it will keep, including the temperature of the room you are keeping it in. Some bread contains additives that produce anti-mould acids, allowing the bread to keep fresh for longer.

Why does bread expire?

After baking, bread goes through many processes which degenerate the quality of the bread. These transformations lead to the bread losing its freshness and becoming stale.

The first issue is the starch re-coagulates back to its original structure. This expels water, making the bread drier.

Next, we have the problem of moisture from the bread evaporating. You’ll notice that a few days old bread is noticeably drier on the outside than in the centre.

As bread ages, it also loses acidity, which makes it more suspect for mould spores to inhibit the bread and multiply.

How long does bread stay fresh?

If you are keeping bread in a warm moist room, often in summer, it will spoil after 3-4 days. If it is store-bought that contains additives, it can last up to 7 days, maybe longer. Homemade bread at room temperature typically lasts three days, and the shelf life depends on the ingredients used. If you freeze your bread, it will last up to six months, but not any longer.

Can you eat bread after the expiration date?

As long as your bread is mould-free, you can eat bread after it has expired. If bread is dry, then it might taste better toasted or even made into bread crumbs for cooking with. It may taste stale if eaten raw. You probably won’t enjoy it as much as normal, but it won’t harm you.

What happens if you eat expired bread?

Once your bread passes its use-by date, the taste can alter slightly, it will typically be drier. If you have artisan bread, limited preservatives are used in making it, so it won’t keep for long at room temperature.

There are so many recipes that call for 5 -day old bread, and if you cook bread and butter pudding ( an easy old recipe), 5-day old bread is the right choice.

Eating bread in the right amounts can be good for us. If selecting nutritional bread, like wholegrain, is an essential part of our diet. If you have a Gluten intolerance you may require a Gluten-free diet, to rebalance gut health.

Because most of the immune system originates in the gut it can be frightening when it doesn’t work properly. If you suffer from gut problems, the reality is that you have probably been through extensive testing to discover the source.

How long does bread last after the expiration date?

When you purchase your bread in the store, it will have either a best-by date or a use-by date on the small tag at the top of the loaf. This is only a guide, and in some cases, it may tell you the date the bread was baked on to give you an idea about how long to keep it.

If any of the following is found, it should be discarded:

Stale bread will go hard, and if it is stale, you won’t enjoy it, but stale bread isn’t harmful.

How to tell if bread has gone bad?

You will normally see mould growing on bread, but you won’t necessarily see Mycotoxins. These are toxins produced by mould and can spread through the whole loaf. They can cause a stomach upset if eaten and can also disrupt the gut microbiota, weakening the immune system.

If your bread has mould growing on it, don’t scrape it off and eat it. Get rid of it, as mould can harm your health and cause serious illnesses.

The term gut microbiome refers to the microorganisms that live in the intestines. People have 300 to 500 different species of bacteria living in their stomachs and intestines.

Some are harmful to our health, while many are necessary and benefit a healthy body. When a wide range of these good bacteria are present in the gut, they can support the immune system, protect against depression and provide many other benefits.

Mould can be highly damaging to gut bacteria and should never be eaten.

Why does bread from a bakery expire faster than store-bought bread?

Bread from a bakery is baked fresh every day, and in many European cities, fresh bread is purchased and eaten every day. In our culture, we may buy it once a week. Artisan bread uses fewer preservatives than store-bought bread, which means it does not usually keep as long.

If the moisture content of the bread is high, like fruit loaf, it will be susceptible to mould and won’t last as long.

When we purchase our bread in the store, it contains more preservatives, ensuring that it lasts a bit longer. This is handy when we are making school lunches and sandwiches.

How to extend the life of bread?

If you have bought sliced bread at the store, take it home and put it store the bread in the freezer. This way, you can take out slices when you need to use them, and there won’t be any waste. All bread is made a bit differently. Some will last longer, depending on the additives and the water content of the bread.

How to extend the life of homemade bread?

The most important factor when making homemade bread that stays fresh is to bake it thoroughly. Bread should sound hollow when tapped and register over 90C (190F). This lowers the free water molecules in the bread crumb, which support the early development of mould. If you’d like to make a big batch of dough and bake fresh loaves across the week, see does dough go bad in the fridge to learn more.

Conclusion – Can you eat bread after the expiration date?

When we buy bread from the bakery, it is in a paper bag, while store-bought sliced bread is in a plastic bag. Because the plastic can be sealed off, it protects the bread better. When we get our bread home, if it is not going into the freezer, it should be stored in an airtight bread box or container in a cooler part of the kitchen or pantry.

Further reading: Is it safe to eat raw flour?